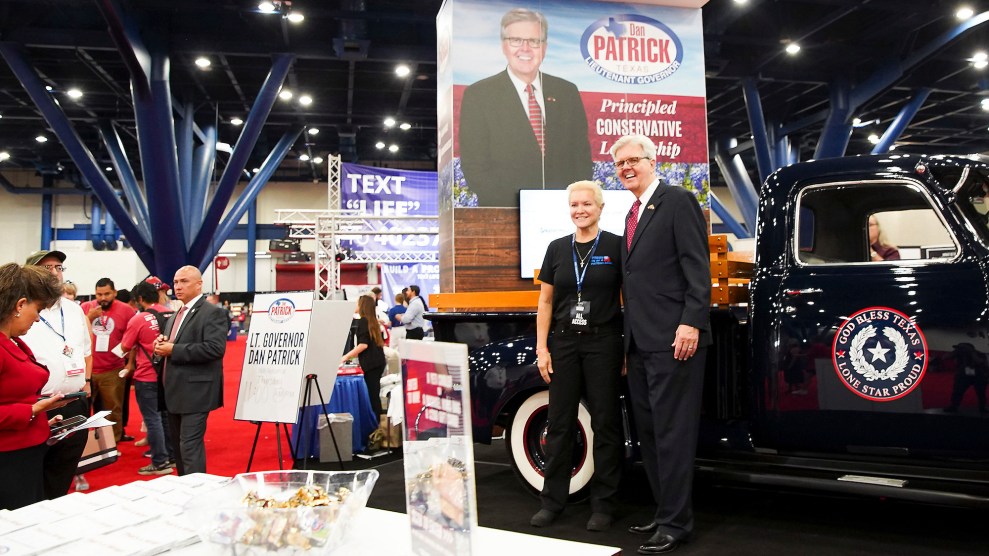 Texas Lt. Gov. Dan Patrick poses for photos with supporters during the first day of the Republican Party of Texas convention.Elizabeth Conley/Houston Chronicle/AP

Thousands of the Texas Republican party faithful voted yesterday on a state GOP platform that calls being gay an “abnormal lifestyle choice,” declares the 2020 presidential election results illegitimate, and urges the repeal of the Voting Rights Act.

The platform says that Texas students should be shown live ultrasounds as a way to deter against abortion and be taught that life begins at fertilization. At the same time, it demands that the state outlaw all sex and sexual health education—even abstinence-only sex ed. Meanwhile, it says that young people are the “most likely to need to defend themselves” and thus should have access to guns without waiting periods for “emergencies such as riots.”

And, doubling down on the anti-LGBTQ hate, the platform says the party “oppose[s] all efforts to validate transgender identity,” calling for bans on gender-affirming care for trans children and the passage of a “Don’t Say Gay” bill stronger than Florida’s. (The high-profile Florida bill, signed into law by Gov. Ron DeSantis in March, prohibits references to sexual orientation or gender identity in schools and is just one of at least 190 bills trying to silence speech about LBGTQ or other minority identities in schools that have been introduced since January 2021, according to Jeremy Young, senior manager of free expression and education at PEN America.)

Peppered with references to Fox News culture war talking points, the platform lurches a hardline conservative party even further rightward; its “abnormal lifestyle choice” language, for example, did not appear in the party’s last two platforms in 2018 and 2020. Votes are still being tallied on the platform’s planks, but it’s rare for any to be rejected, a party spokesperson told the Texas Tribune. Voting took place at the Texas Republican Convention on Saturday, a biennual event that this year brought 5,100 GOP delegates and alternatives to Houston for a three-day conference.

While it’s little surprise for the most engaged members of the Texas GOP base to embrace hard-line conservative stances in their largely symbolic party platform, the platform is “important as a measure of ideological drift,” University of Houston political scientist Brandon Rottinghaus told the Texas Tribune. Extremely conservative platforms are also a useful political tool for far-right challengers in Republican primaries, who can use them to attack more moderate Republican opponents. The platform does not change any policy or law in Texas, as the Tribune explains:

Party platforms are mission statements rather than legal doctrines and, in Texas, they have long reflected the opinions of the most activist wings of the parties. Republican elected officials are not bound to adhere to the platform, and party activists at times have expressed frustration that some parts of their platform and legislative priorities have not become law, despite complete Republican control of the state Legislature.

But the platforms are broad indicators of the sentiments of the most active Republican voters — those who dominate party primaries. Republicans have controlled every statewide elected office in Texas since 1999 and both houses of the Legislature since 2003, so the wishes of the party’s populist, pro-Trump base inevitably affect actions taken in Austin.

The ruling party’s political hostility to the existence of trans Texans has already had severe consequences in the state. Early this year, Gov. Greg Abbott directed the state’s Department of Family and Protective Services to investigate parents who appeared to have allowed their trans kids to receive life-saving medical care. Labeling such care a form of “child abuse,” the directive led some families to begin planning to flee the state. (A state court judge in Austin has issued an order putting most investigations temporarily on hold.)

The embrace of anti-LGBTQ ideology among Texas Republicans is a part of a national trend of hostile legislation and political hate mongering that is now leading to a surge of anti-gay violence. As the Washington Post reported this week, right-wing politicians and preachers have recently called for killing LGBTQ people or parents and teachers who support them. Anti-LGBTQ demonstrations and attacks have quadrupled over the last year, from 15 to 61 incidents; and a white supremacist attack on a Pride celebration in Idaho this month was only narrowly avoided.

Correction, June 21: An earlier version of this story mischaracterized the bills targeting speech about minority identities in schools.