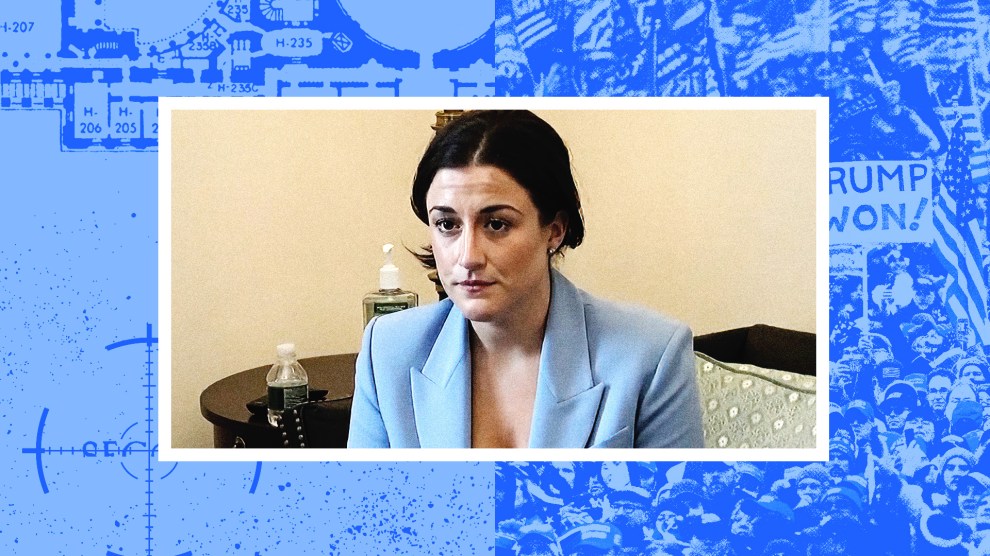 In a sense, Secret Service agent Bobby Engel spoke for most Americans when he reportedly told President Donald Trump, on January 6, 2021: “Take your hand off the steering wheel.”

That of course is according to the show-stopping, “holy-shit” testimony on Tuesday by Cassidy Hutchinson, a former top aide to White House Chief of Staff Mark Meadows. Hutchinson described an account shared with her by Anthony Ornato, Trump’s chief of operations. He described it in the presence of Engel, who did not dispute it, Hutchinson said.

Former Trump White House aide Cassidy Hutchinson recounts hearing that Donald Trump tried to force his driver to take him to those marching on the Capitol. "Mr. Trump then used his free hand to lunge towards Bobby," she said, gesturing to the throat. pic.twitter.com/zJDpO8uRGi

Trump wanted to get to the Capitol and join the insurrectionists, many armed, who he had just incited with lies about election fraud. But Engel, who headed the security detail in Trump’s armored limousine, known as “the Beast,” told Trump he could not, due to security concerns, according to Hutchinson’s account. Enraged, Trump declared “I’m the f-ing president,” Hutchinson said, and “reached up towards the front of the vehicle to grab at the steering wheel.” Engel told him: ‘Sir, you need to take your hand off the steering wheel. We’re going back to the West Wing.”

The President of the United States, in Hutchinson’s account, then “used his free hand to lunge towards Bobby Engel.” Ornato, Hutchinson said, indicated to her that Trump went for Engel’s throat.

Several media outlets reported Tuesday night that Engel and the driver of Trump’s vehicle deny that Trump had reached for the wheel or assaulted either man, though they reportedly do not dispute that Trump demanded to be driven to the Capitol. Some outlets, citing unnamed sources, also reported that Ornato denied Hutchinson’s account. Trump on Tuesday denied Hutchinson’s account, as well as her testimony that she knew of Trump “throwing dishes or flipping the tablecloth and letting all the contents of the table go onto the floor” on various occasions. In a series of social media posts, he also disputed other aspects of her testimony.

Trump’s alleged assault on his own Secret Service agent may have been the most colorful story Hutchinson detailed in Tuesday’s hastily arranged hearing, but it was just one of a series of gobsmacking disclosures that drew muttered exclamations and furious typing from reporters in the room.

For instance, Hutchinson described repeated warnings by White House Counsel Pat Cipollone that Trump’s plan to go to the Capitol was illegal. “We’re going to get charges of every crime imaginable if we make that move,” Cipollone told Hutchinson, she recalled, while urging her to push Meadows to oppose it. Cipollone specifically warned that Trump and his aides would be committing the crime of “obstructing the electoral count,” Hutchinson recalled in a videotaped deposition shown during the hearing, noting she didn’t recall the exact statute.

That’s big. Obstructing an official proceeding –the counting of electoral votes– and conspiring to obstruct an official proceeding are key charges that the Justice Department has leveled against Oath Keepers, Proud Boys and others who helped lead the attack on Congress. And in March, a federal judge in California said in a ruling that it was likely that Trump “corruptly attempted to obstruct the Joint Session of Congress on January 6, 2021.” Cipollone’s warning, especially if he delivered it directly to Trump, sounds like evidence that Trump knew his scheme to push Pence to refuse to certify the election was a crime.

Hutchinson revealed Tuesday that Trump and his top aides received warnings before January 6 that violence was likely. John Ratcliffe, Trump’s national intelligence director, previously a staunch Trump backer, warned against Trump’s efforts to undermine the peaceful transfer of power. Ratcliffe “was concerned it could spiral out of control and potentially be dangerous either for our democracy or the way things were going for [Jan.] 6,” Hutchinson said.

She testified that she remembered conversations about far right extremist groups that came up in the presence of Rudy Giuliani, who was working as Trump’s lawyer. “I recall hearing the word Oath Keeper and hearing the word Proud Boys closer to the planning of the January 6th rally when Mr. Giuliani would be around,” Hutchinson said. This was a confusing but potentially significant suggestion of a link between Giuliani and far right groups that led the January 6 attack. She didn’t explain further on Tuesday.

Hutchinson also testified that she helped arrange for Meadows to speak with longtime Trump adviser Roger Stone and former National Security Adviser Michael Flynn on the evening of January 5. Stone received security from Oath Keepers around January 6 and both men were in touch with extremist groups in the days before the riot. Meadows planned to confer personally with those men, Giuliani, and others in a so-called “War Room” at the Willard Hotel that night, but was dissuaded by wary advisers and settled for a call, Hutchinson said.

Trump has repeatedly claimed that none of the January 6 attackers were armed, an assertion Mother Jones has explained is false. But Tuesday’s testimony revealed that Trump knew many people in the crowd listening to his January 6 speech were carrying guns.

Hutchinson said that Trump became enraged when he learned magnetometers—metal detectors—were limiting the crowd entering an enclosed area to listen to him speak on the Ellipse. So Trump told aides to have security stop checking for firearms. “I don’t fucking care that they have weapons,” she recalled him saying. “They’re not here to hurt me. Take the fucking mags away. Let my people in. They can march to the Capitol from here.”

That last line—”They can march to the Capitol from here”—is a shocker. Trump in his ensuing speech went on to urge onlookers to go the Capitol. He did at one point tell them to do so “peacefully.” But Hutchinson’s account indicates he knowingly sent armed supporters he had just incited with lies toward Congress.

Hutchinson’s accounts of Meadows’ actions were similarly devastating. She described Meadows as inert, staring at his phone at various moments, and barely reacting when told of the unfolding violence. When Cipollone demanded Meadows join him in urging Trump to denounce the attack on Congress, Meadows said: “He doesn’t want to do anything,” Hutchinson recalled.

Then Cipollone mentioned the calls by insurgents to “hang Mike Pence.” (Those chants came after Trump incited them by tweeting that Pence “didn’t have the courage” to try to throw out Biden’s electors.) Meadows, Hutchinson said, responded: “You heard it Pat. He thinks Mike deserves it. He doesn’t think they’re doing anything wrong.”

Rep. Liz Cheney (R-Wyo.) the committee’s vice chair, indicated Tuesday that Hutchinson endured substantial pressure not to reveal this information. During the hearing, Cheney displayed statements from other witnesses that described pressure from Trump allies. Cheney did not name the witnesses or who had been in contact with them.

“What they said to me is, as long as I continue to be a team player, they know that I’m on the team, I’m doing the right thing, I’m protecting who I need to protect, you know, I’ll continue to stay in good graces in Trump World,” one witness said. “And they have reminded me a couple of times that Trump does read transcripts and just keep that in mind.”

“[A person] let me know you have your deposition tomorrow,” a message to another witness said. “He wants me to let you know that he’s thinking about you. He knows you’re loyal, and you’re going to do the right thing when you go in for your deposition.”

Committee members said they will investigate whether such messages broke the law. “It’s a crime to tamper with witnesses. It’s a form of obstructing justice,” Rep. Jamie Raskin (D-Md.) told reporters. “It’s something we want to look into.”

Hutchinson said Tuesday that she is “still struggling to work through the emotions” that the Trump attack on Pence on January 6 evoked in her.  “As an American, I was disgusted,” she said. “It was unpatriotic, it was un-American. We were watching the Capitol building get defaced over a lie.”

Cassidy Hutchinson is 25 years old, according to the Associated Press. She witnessed the first attempt in American history by a defeated president to stop the peaceful transfer of power. She shouldered the responsibly of revealing what she saw. Her testimony, which subjected her to immediate attacks from Trump, contrasted starkly with the silence of Meadows, who has refused to talk to the committee under oath, despite publishing a book that addresses January 6, as well as figures like Cipollone and even Pence.

Rep. Bennie Thompson (D-Miss.) the January 6 committee’s chairman, said in concluding remarks that Hutchinson’s testimony may shame some witnesses who have refused to come forward into reconsidering. But regardless, she has undermined Trump’s cover up efforts, Thompson said: “Because of this courageous woman and others like her, your attempt to hide the truth from the American people will fail.”

Correction, June 29: An earlier version of this story incorrectly said that Secret Service Agent Robert Engel was driving the president’s armored limousine when Donald Trump allegedly lunged for the wheel. Engel was reportedly in the vehicle as the head of Trump’s security detail, but not driving. This article has also been updated to note reports that Engel, the driver and Anthony Ornato dispute some of Hutchinson’s account of the incident.