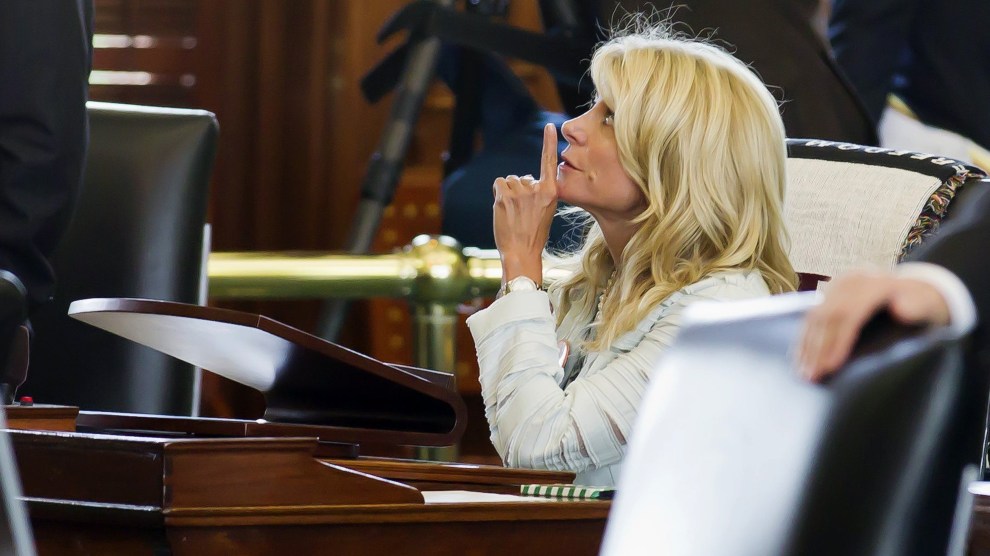 State Sen. Wendy Davis gestures to calm the crowd down before she led a filibuster to block passage of a bill of abortion restrictions on June 25, 2013.Ricardo B. Brazziell/Austin American-Statesman

In June 2013, when Texas state Sen. Wendy Davis held a remarkable 11-hour filibuster that delayed one of the most devastating state-level abortion restrictions in recent history, she created something of an iconic moment for abortion rights—which also marked one of the last high-profile points of success, though fleeting, for the movement.

“I just couldn’t believe it, that this was something that the female replacement of Ruth Bader Ginsburg was saying from the Supreme Court bench. It was sickening.”

House Bill 2, the Texas law she was fighting, eventually went into effect about four months after her filibuster, shuttering roughly half the state’s abortion clinics; it was overturned by the Supreme Court in the 2015 Whole Woman’s Health v. Hellerstedt ruling, but access for Texas patients never fully recovered. And this was all before Senate Bill 8, which since September has banned abortions after six weeks and instituted a bounty system to punish anyone who “aids or abets” an abortion, and more recently, the reinstitution of a 1925 total abortion ban in the state.

In a conversation Tuesday, Davis spoke about what it has been like to lose faith in an institution that she once believed in as a force for good. Below are her reflections, in her own words, condensed and edited for clarity.

I had three moments of real upset leading up to Dobbs. The first was when the Supreme Court was hearing the oral argument on Senate Bill 8. The question was: Can we allow individual actors to supplant the state in order to avoid constitutional review? And it was so clear that Amy Coney Barrett and Brett Kavanaugh believed that that was just bullshit, because once you do it for one constitutional right, why can’t you do it for another and another and another? And they seemed like they were gonna go our way.

But then, during oral arguments for Dobbs, it became very clear, based on the questions that the justices were asking and the things that they were saying, that they were going to overturn Roe. They had made up their minds, and Roe was dead. And that moment, I was standing in my kitchen, cleaning up and listening to it in the background, and I just started sobbing. I think it was Amy Coney Barrett; she asked this question like, “Well, today is different than it was back then. Women can just, you know, take their babies to a fire station or they can easily give them up for adoption.” And I just couldn’t believe it, that this was something that the female replacement of Ruth Bader Ginsburg was saying from the Supreme Court bench. It was sickening. It was a real turning point.

When the leaked opinion came out, that was another day of absolute sorrow and anger. Reading the way it was written—I’m a lawyer, I went to Harvard Law School—I just couldn’t believe the juvenile way in which Justice Alito had maneuvered and swept aside everything that had happened before to get to the place that he so clearly wanted to go. It lacked integrity on every level. What has been jurisprudence in the past—even jurisprudence that I didn’t agree with—at least you could say then that there was some integrity to the argument. This was just an abomination. And still, there’s this tiny, tiny little part of you that’s thinking, Maybe after all this outcry that’s happened, maybe Justice Roberts convinces one of these people, Kavanaugh most likely, to meet him in more of a middle ground.

“Even when I filibustered, even as bad as things kept getting, I believed that the Supreme Court would save us from our worst impulses, our worst instincts, and it just didn’t happen.”

Then when the decision came out, it was just so surreal, because as much as I knew it was going to happen, there’s still this weird part of me that believed it wouldn’t. I just couldn’t believe that we had actually landed in a place where Roe v. Wade had been overturned. If you told me that when I was in law school, I just couldn’t have fathomed it. Even when I filibustered, even as bad as things kept getting session after session of assault upon assault, I believed that the Supreme Court would save us from our worst impulses, our worst instincts, and it just didn’t happen. And so I felt that on a level as a lawyer—[voice cracks] I’m crying, thinking about this—as a lawyer who always believed so strongly in the court. There were the Earl Warren years and how the court took us to a place where we had been progressively getting to, and they saw that and they reflected that in Brown v. Board and so many of the other civil rights decisions that came out of the Earl Warren court—he was a Republican appointee, by the way. I was so sad for the institution and the reverence that I’ve always had for it. It just felt like the greatest tragedy to me, and it is clearly the beginning of what’s going to be one domino after another after another impacting this country and the equality of people here.

But I also felt it as a grandmother, and a mom of two daughters. My grandchildren are both girls. So I have two girls and two grand-girls, and that was where I felt that the most keenly, in the sadness of what this was going to mean for them.