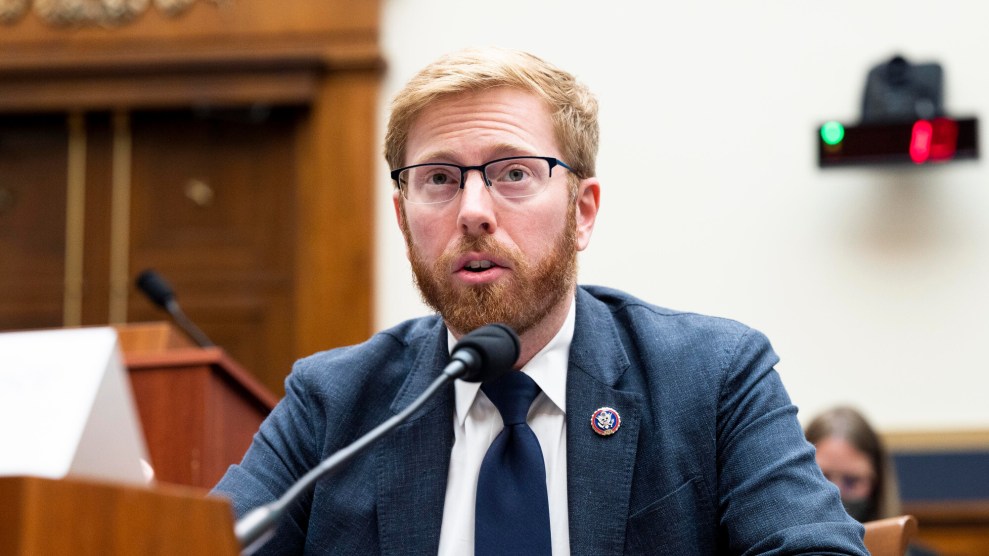 As it tries to hold onto its House majority in a hostile electoral climate, the Democratic Congressional Campaign Committee has embraced an old political trick—spending money in Republican primaries to elevate candidates it believes will be easier to beat in November.

But the DCCC isn’t just bolstering Republicans who aren’t very good campaigners or who might be poor fundraisers—in Michigan’s third congressional district, it’s specifically spending money to boost John Gibbs, an election-denying Trump loyalist, over incumbent Rep. Peter Meijer, one of a handful of Republicans who voted to impeach Trump after January 6. Specifically, the DCCC has spent $435,000 on ads that call Gibbs “too conservative for West Michigan” and note that he was “handpicked by Trump”:

It might sound a lot like a standard attack ad, but it takes on a much different context during a GOP primary, where all of the things described in the ad are quite popular; the purpose is to link Gibbs and Trump in the minds of Trump voters.

Meijer isn’t happy about this, telling Politico that he’s “sick and tired of hearing the sanctimonious bullshit about the Democrats being the pro-democracy party.” But interestingly, a number of Democratic members of Congress aren’t happy either, and they’ve criticized the move publicly. New York Rep. Kathleen Rice, for example, called the use of campaign funds to help election deniers “unconscionable.” Minnesota Rep. Dean Phillips said it was “just damn wrong.”

On ABC’s This Week on Sunday, New York Rep. Ritchie Torres joined the parade of Democratic critics, slamming the move as “embarrassingly hypocritical.”

“The DCCC is not God—it cannot guarantee the outcome of the general election.” https://t.co/3IS8SPFltP pic.twitter.com/ZsP7uJt4M4

“We cannot credibly defend democracy and then prop up candidates who are an existential threat to the very democracy that we’re defending,” Torres said. “And in politics, when you try to be too cute and clever, it often backfires. The DCCC is not God. It cannot guarantee the outcome of the general election. And when you prop up a conspiracy theorist in a Republican primary, you run the risk of sending an extremist to the United States Congress, and that’s an egregious misuse of Democratic resources.”

In attempting to choose their opponents by meddling in Republican primaries, the DCCC is deploying an old strategy—one that has delivered some notable successes in the past. Former Missouri Democratic Sen. Claire McCaskill famously helped Rep. Todd Akin win a Republican primary in 2012, and then cruised to victory after Akin told an interviewer that allowing rape victims to access abortion services was unnecessary because the body “has a way of shutting [pregnancy] down” after a “legitimate” rape. National Republicans all but abandoned their nominee, and McCaskill won a second term.

This was sort of the ideal, in terms of risk and reward. Akin would have been a lousy senator, but the main difference between Akin and various other Missouri Republicans wasn’t what he believed—Missouri Republicans have made it illegal for rape victims to get abortions in the state—but that he was uncommonly bad at running for office. (For instance, by speaking extemporaneously about the party’s position on abortion exceptions.)

You could make a similar case for individual members of the House, who might never take a more important vote than the one they make for speaker. After redistricting, Meijer went from a district Trump narrowly won to one that Biden carried by 8 percentage points in 2020; it’s not hard to see why Democrats would sense an opportunity there.

But as we’ve seen over the last few years, it also matters what individual members of Congress say and do once they get there. There are costs to adding more election deniers and Trump acolytes to the chamber—and to using money you’ve raised from grassroots donors to help them get there. In this case, elected Democrats’ vocal complaints about Gibbs are notable. After all, they’re the ones who’d have to work with him.