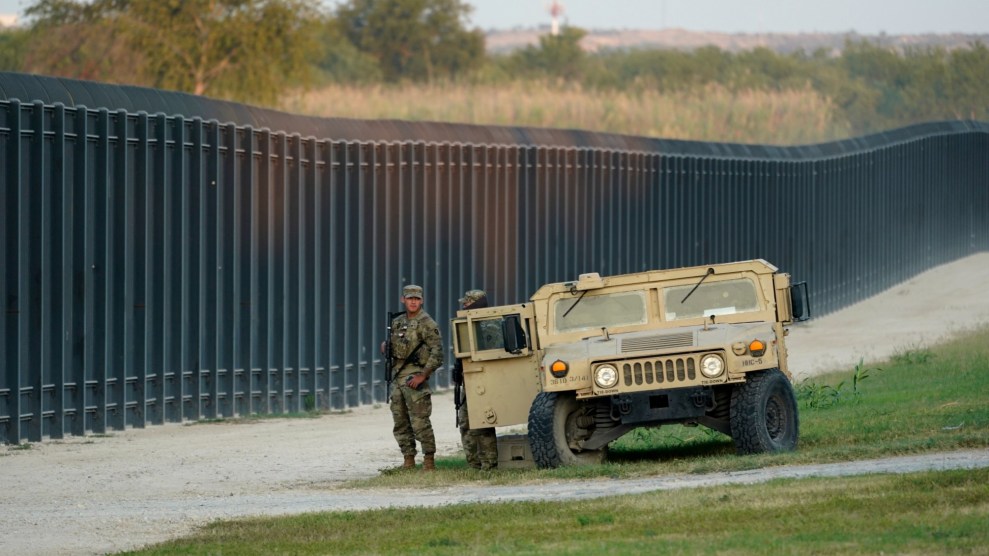 National Guardsmen stands watch over a fence near the International bridge in Del Rio, Texas.Eric Gay/AP

During a press conference on July 5, several county officials from Texas gathered to pray, read the Pledge of Allegiance, and issue a declaration stating they were under a migrant “invasion.” Among the local leaders and county judges present was the mayor of Uvalde, Don McLaughlin, who referred to the tragic mass shooting at Robb Elementary School that killed 19 children and two teachers when denouncing an “influx of pedophiles, convicted murderers, drug dealers, and gang members” and warning about “bailouts” ahead of kids returning to school.

Besides disseminating racist tropes and scapegoating migrants, they were there to pressure Governor Greg Abbott to “acknowledge the existence of an invasion on our border with Mexico and take necessary actions to preserve and protect the sovereignty and territorial integrity of Texas.” Make no mistake: The goal here is to declare a war on migrants and justify the use of combat-like force to remove them. This is not an exaggeration. None other than Republican Lieutenant Governor Dan Patrick of Texas was explicit on Fox News: “We are being invaded and if we’re being invaded under the Constitution, I think that gives us the power to put hands on people and send them back,” he said. “We’re under attack like at Pearl Harbor.”

One of the masterminds behind the “invasion” legal argument is Ken Cuccinelli, former Virginia attorney general, and Trump’s Department of Homeland Security official. Now a senior fellow with the right-wing think tank Center for Renewing America, he’s a proponent, along with Arizona Attorney General Mark Brnovich, of states invoking a “self-help” measure under Article I, Section 10, Clause 3 of the US Constitution. This passage states: “No state shall, without the consent of Congress, lay any duty of tonnage, keep troops, or ships of war in time of peace, enter into any agreement or compact with another state, or with a foreign power, or engage in war, unless actually invaded, or in such imminent danger as will not admit delay.”

In other words, they argue that the federal government has failed to fulfill its constitutional duty to protect states from an invasion, and, therefore, it’s up to states to defend themselves. The Center for Renewing America’s three-step roadmap recommends border states follow Texas’ lead and send their National Guards to the southern border and suggests the use of “kinetic action if necessary,” which means military action. It’s worth noting that even Cuccinelli acknowledges that Abbott’s extreme border enforcement measures—whether it’s the deployment of thousands of National Guard soldiers and state troopers through Operation Lone Star or busing arriving migrants to Washington DC—are “little more than window dressing” and a waste of money. A more effective approach, Cuccinelli seems to think, simply is to give states carte blanche to expel migrants.

“The move to call migration an ‘invasion’ to push Texas Governor Greg Abbott to make Operation Lone Star even more militarized and abusive is unnecessary, racist, and dangerous.”

“The move to call migration an ‘invasion’ to push Texas Governor Greg Abbott to make Operation Lone Star even more militarized and abusive is unnecessary, racist, and dangerous,” Bob Libal, a consultant for Human Rights Watch, said. “By using the word ‘invasion,’ with its links to military attacks, Texas officials trivialize its meaning by applying it to people migrating to the US, many of whom are seeking asylum from violence and abuse.”

The “immigration as invasion” trope has a long and racist history in the United States and didn’t begin with Trump’s attacks on migrant caravans. As Juan F. Perea of the Loyola University Chicago School of Law wrote in his 2020 article “Immigration Policy as a Defense of White Nationhood,” the imagery of invasion, crisis, and crime that Trump disseminated is a response to a perceived threat to the “prevailing conception of the United States as a country controlled and dominated by whites and their culture.” The real justification for border control, he notes, seems to be “the need to reassure anxious whites that their dominant place in society remains secure in the face of demographic change.”

Not surprisingly, in 1994, nativist and eugenics enthusiast John Tanton, the architect of the modern anti-immigration movement, co-authored a book titled “The Immigration Invasion” with Wayne Lutton, editor of the white nationalist publication The Social Contract. The idea of a “Hispanic invasion” also appeared in the 2019 El Paso shooter’s manifesto.

Besides the evident potential to incite violence, the invasion rhetoric has resulted at times in real exclusionary immigration policies that singled out specific nationalities. For example, the Chinese Exclusion Act of 1882—which the Supreme Court upheld by referring to an “Oriental invasion” and their inability to “assimilate with our people”—and the Immigration Act of 1924 that was aimed at curbing migration from perceived “non-white” southern and eastern Europeans, once described by a US senator from Michigan as the “Goths and Vandals of the modern era, they come only to lay waste, to degrade and destroy.” In 1892, the US solicitor general said “the most insidious and dangerous enemies to the State are not the armed foes who invade our territory, but those alien races who are incapable of assimilation, and come among us to debase our labor and poison the health and morals of [our] communities.” Later, in the 1950s, The Immigration and Naturalization Service Commissioner Joseph Swing justified the military-style Operation Wetback that culminated in the mass deportation of at least 1 million Mexicans by claiming “an actual invasion of the United States.”

It’s impossible to separate that history from the political stunts performed by Tucker Carlson, or the former longtime FOX-10 Phoenix anchor Kari Lake who is the Trump-backed frontrunner in the GOP primary for the Arizona attorney general race. She compared what is taking place on Arizona’s border to the actual invasion of Ukraine. “On day one I take my hand off the Bible delivering the oath of office, and we’re going to issue a Declaration of Invasion,” she said recently. “That’s what’s happening down there. We’re going to finish President Trump’s wall and we’re going to use the materials that are down there that we already paid for and we’re going to put our Arizona National Guard on the border to stop people from coming across. We’re going to stop them.”

As many legal experts have noted, not only is there not a real invasion at the border but the use of state resources to deport immigrants would promptly face legal challenges because immigration enforcement is the responsibility of the federal government. In fact, past lawsuits brought by states alleging the federal government’s failure to control migration based on a claim of violation of the protection against invasion clause of the Constitution have been dismissed by the courts.

“An ‘invasion’ isn’t just an overstatement,” David J. Bier, associate director of immigration studies at the Cato Institute, writes. “It’s a completely unserious attempt to demand extraordinary, military-style measures to stop completely mundane actions like walking around a closed port of entry to file asylum paperwork or violating international labor market regulations in order to fill one of the 10 million job openings in this country. But the goal of this nativist language warfare is nothing less than the removal of immigrant rights.”