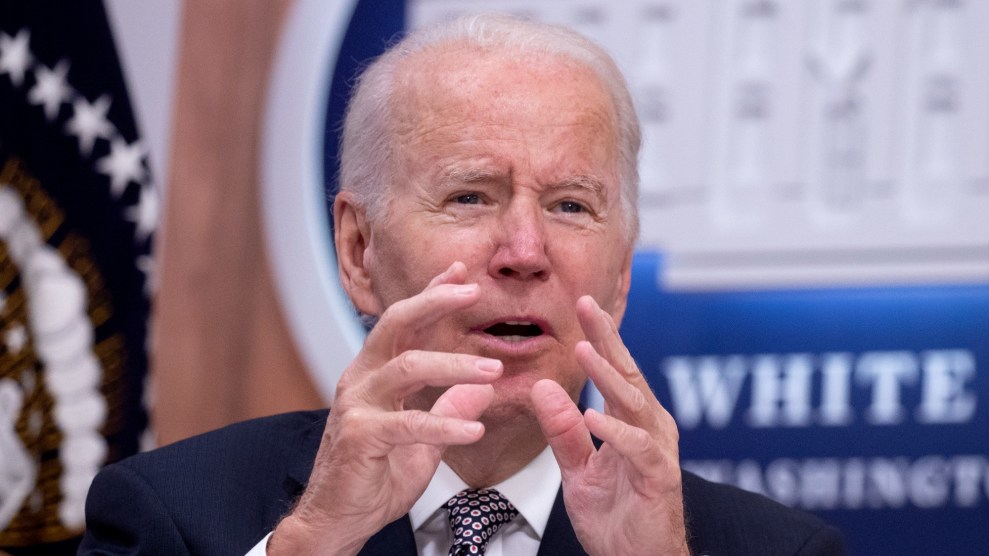 President Joe Biden participates in a virtual meeting with leaders of the Major Economies Forum on Energy and Climate.Michael Reynolds/ Zuma

Joe Biden’s election triggered a global surge in optimism that the climate crisis would, finally, be decisively confronted. But the US Supreme Court’s decision last week to curtail America’s ability to cut planet-heating emissions has proved the latest blow to a faltering effort by Biden on climate that is now in danger of becoming largely moribund.

The Supreme Court’s ruling that the US government could not use its existing powers to phase out coal-fired power generation without “clear congressional authorization” quickly ricocheted around the world among those now accustomed to looking on in dismay at America’s seemingly endless stumbles in addressing global heating.

The decision “flies in the face of established science and will set back the US’s commitment to keep global temperature below 1.5C,” said Saleemul Huq, director of the International Centre for Climate Change and Development in Bangladesh, in reference to the internationally agreed goal to limit global heating before it becomes truly catastrophic, manifesting in more severe heatwaves, floods, droughts and societal unrest.

The “incredibly undemocratic SCOTUS ruling” indicates that “backsliding is now the dominant trend in the climate space.”

The “incredibly undemocratic SCOTUS ruling” indicates that “backsliding is now the dominant trend in the climate space,” said Yamide Dagnet, director of climate justice at Open Society Foundations and former climate negotiator for the UK and European Union. António Guterres, the secretary general of the United Nations, who has called new fossil-fuel infrastructure “moral and economic madness,” said via a spokesman that the ruling was a “setback” at a time when countries were badly off track in averting looming climate breakdown.

In the 6-3 ruling, backed by the right-wing majority of justices, the Supreme Court did not completely negate the Environmental Protection Agency’s ability to regulate emissions from coal plants. But it did side with Republican-led states in stating that the government could not set broad plans to shift electricity generation away from coal because of the nebulous “major questions doctrine” that demands Congress explicitly decide on significant changes to the US economy.

“The court appoints itself, instead of Congress or the expert agency, the decision-maker on climate policy,” wrote justice Elena Kagan in an unusually blunt dissenting opinion. “I cannot think of many things more frightening.”

Al Gore, the former US vice-president said the ruling was the “result of decades of influence and coordination by the fossil fuel lobby and its allies to delay, obstruct, and dismantle progress toward climate solutions.”

For Biden, who called the ruling “devastating,” the court’s decision is just the latest crushing jolt to what was billed as a “climate presidency” when he was elevated to the White House.

Landmark legislation to bolster clean energy has stalled in Congress, largely due to the opposition of Joe Manchin, a centrist Democrat who has a coal-trading firm, and is perilously close to not being resurrected in time before midterm elections later this year in which Democrats are expected to lose their tenuous hold on Congress. The US, almost uniquely among major democracies, still has no national climate or energy policy in place.

Biden’s promise to end oil and gas drilling on public land has been unfulfilled, while Russia’s invasion of Ukraine has caused gasoline prices to leap, prompting the president to urge oil companies to ramp up production, to the horror of climate campaigners.

In order for the United States to meet its emissions targets, “the ball needs to start rolling very fast, very soon.”

The president has vowed that the US will cut its emissions in half by 2030, but this goal, and America’s waning international credibility on climate change, will be lost without both legislation from Congress and strong executive actions. Both of these factors remain highly uncertain, with the Supreme Court’s ruling sharply restricting the latter option. Gina McCarthy, the White House’s top climate adviser, has admitted the administration will have to get “creative” in forcing down emissions.

“Congress acting on climate was important before this decision, now it’s even more important,” said John Larsen, partner at Rhodium group, a climate and energy analysis organization. According to Rhodium, the Supreme Court ruling is not fatal to US climate targets, but there are still 1.7 billion to 2.3 billion tons of greenhouse gases that will need to be prevented on top of current policy if the 2030 goal is to be met.

“The EPA still has authority, although it is more narrow than it was, so they need to get moving and crank out some rules because there’s not a lot of time left,” Larsen said. “It’s entirely possible the US will meet its emissions target but we have just eight years until 2030. The ball needs to start rolling very fast, very soon, if we are to get there. Everyone needs to really step up and start delivering.”