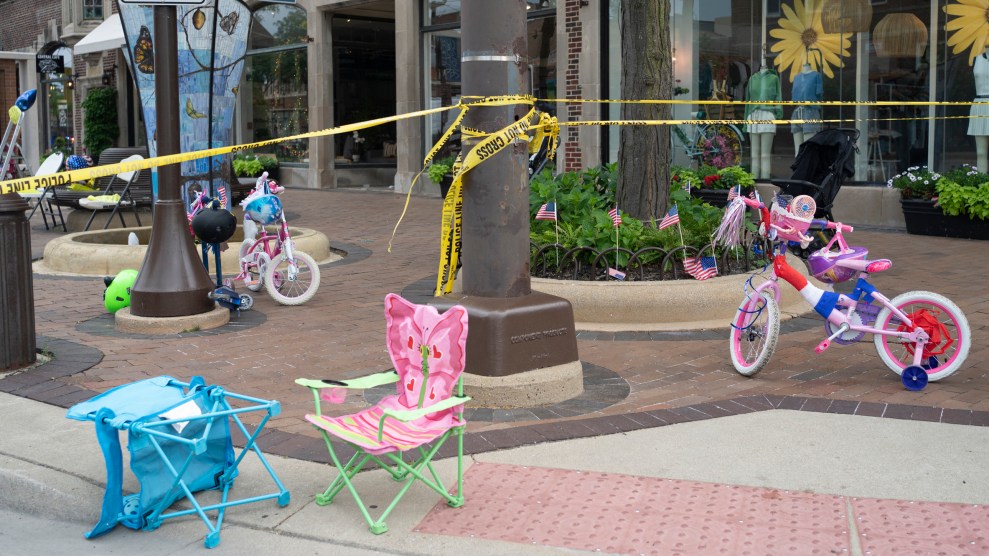 For years, Allison Kamen has had a birthday tradition: the Fourth of July parade at her parents’ town of Highland Park, Illinois, followed by a barbecue and fireworks. This year was particularly special since it was her 50th. She drove with her husband and nine-year-old daughter from their home in Evanston, a half hour away, and nestled into a viewing spot in the middle of downtown Highland Park. Minutes after the parade began, a mass shooter started firing, leaving seven dead. Kamen’s eighty-nine-year-old father was among the dozens who were injured. We spoke with her the day after the tragedy and asked her to describe her experience. Her story has been edited for length and clarity.

It was the first parade back after a two-year hiatus due to Covid, so there were definitely a lot of people. It was really exciting to be back. And we—my family and I—snuck a spot right by the grandstand. I was with my dad and my sister, my stepsister, my husband, my daughter, my niece, and my cousin. We were all clumped up in a little area, some on chairs and some down on the ground.

I don’t really have a good sense of time, but this was very much in the beginning. We saw the mayor marching. My dad reminded me today that we were singing “You’re a Grand Old Flag” as a band went through.

Not a whole lot of time had passed into the parade—probably less than 10 minutes. And we started hearing something that sounded like fireworks across the street—which is not unusual. It was like when somebody sets off fireworks in an alley or something. We looked across the street and saw smoke, and all of a sudden, realized that this wasn’t fireworks. People started running, screaming, “Get down! Get down!” There was a little bit of a pause, and then we heard another round. We were just a foot away from where the shots were going.

My nine-year-old daughter got up and ran, and my dad stood up. At that point, he got hit in the shoulder with—we still don’t actually know what’s in there, some type of either shrapnel or debris. We don’t know if it was something that was from the bullet itself or something that bullet hit and then shot up from the ground, like a piece of concrete. So we all started looking for cover. My daughter ran away, I’m trying to get my dad to get down. He was a little too far away for me to get there without going through an open space. The person next to him helped him get to the ground. My dad is 89, and he can get down on the ground but is a little bit slower.

I didn’t know where my daughter ran off to. She later told me she found a hiding spot and then, immediately after, found my sister. They started running back to my mom’s house. I can never thank my sister enough for taking my daughter back.

Once we realized there weren’t any more shots, people started to slowly get up and trying to help people who were hit. My dad’s back was to me, but he was holding his arm. When he turned to me, I saw blood. A few feet away, there was a child and a parent, and the parent needed a tourniquet. There were people everywhere—people walking around helping. I don’t know if they were doctors or if they were EMTs, if they were official or not official. It didn’t matter—people were helping. My dad said it didn’t really hurt, it was like a pinch. He insisted he didn’t need to go to the hospital.

At that point, they were starting to have people go home if they could. Looking around, I saw bodies on the ground. I don’t know if some of those people are the people who died. I don’t know.

One woman said, “Sir, I see you’re bleeding. I’m an emergency room nurse. Can I help you?” She was unbelievably kind. She helped him get a shirt off, she looked at what was going on. And she said it looks like you’ve been hit. You need to go to the emergency room.” The kindness of strangers—I mean, everybody just really chipped in to help.

At the hospital, they said it wasn’t life threatening. They took an Xray and said they could see something was there, but they discharged him.

Yesterday was my 50th birthday. My birthday is the same every year. It’s a parade. It’s fireworks. It’s a barbecue. I just don’t see how it’s going to be the same anymore. I don’t see myself going to any crowded areas for the next—I don’t know, maybe not forever. And, you know, I don’t want to be afraid for the rest of my life. I don’t know how I’m going to feel in a few weeks, in a few years. I’m not saying I want to give in to the people who are doing all these terrible things. But how can I feel safe to go anywhere without wondering who’s got a gun in their hands and what they’re going to do?

We’ve been having a discussion in our family because we’ve had a lot of media reach out to us. My dad was interviewed today, my sister was just interviewed. I will say, it’s a lot. I think it’s important to share, but at the same time, you know—I wasn’t entirely sure. I don’t know the right balance. I don’t know what feels right. We all have a story to tell, but I don’t want to make a big deal out of it. There are people who lost family members. This woman was interviewed today—her mother was shot right next to her. And she had to run because she saw the shooter picking up the gun. She had to leave her dying mother. I listened to that, and I thought, I don’t have that. I have my dad and I have my sister and my daughter and my husband and my other family members that were with us. I’m beyond grateful. If we were pushed over a little bit and moved our chair somewhere else, things would be different.