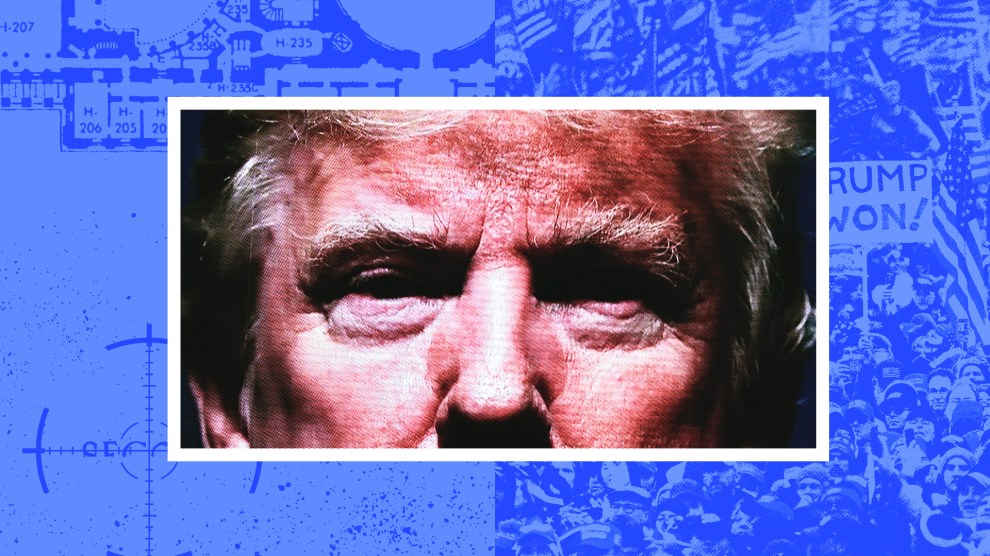 The ongoing series of hearings by the House committee investigating January 6 has produced numerous revelations about Donald Trump’s attack on the peaceful transfer of presidential power. The most explosive evidence to date has come from Cassidy Hutchinson, a former top aide in the Trump White House, who described how Trump knowingly urged armed supporters to march on the Capitol and reportedly raged against Secret Service agents who prevented him from joining the mob bent on stopping the certification of Joe Biden’s election victory.

Even after all the chaos and drama of Trump’s presidency, the mounting evidence of how he sought to menace Congress on Jan. 6, 2021, has been shocking—he reportedly even endorsed the potential murder of his own vice president that day. The evidence both underscores and adds context to Trump’s most sinister legacy: his role as the leader of a domestic terrorism movement. The American public has continued to learn about his direct influence on extremists from the House hearings and from the ongoing prosecutions of hundreds of Jan. 6 participants by the Justice Department.

“We’ve got a fucking president, we don’t need much more.”

In the aftermath of the insurrection, the DOJ quickly uncovered broad evidence of how Trump had motivated the assault on the Capitol. The picture has since only grown more stark. The case of Guy Reffitt is illustrative: a Three Percenter militia member who had traveled from Texas, Reffitt was convicted by a jury in March on five counts, including weapons charges and obstruction of Congress. In a July 15 sentencing memo, prosecutors asked the court for 15 years in prison for Reffitt, who led a group of rioters against police in breaching the Capitol. The sentencing request is based on a terrorism enhancement, which prosecutors said was appropriate for a crime that “was calculated to influence or affect the conduct of government by intimidation or coercion, or to retaliate against government conduct.”

Case evidence showed that Reffitt came to Washington armed with multiple guns, wore heavy tactical gear, and recorded the siege with a helmet camera, whose footage included him declaring repeatedly to those around him how they would “take” the Capitol. “We’re all going to drag them motherfuckers out kicking and screaming…I just want to see Pelosi’s head hit every fucking stair on the way out.”

His statements included his belief that the rioters had “the numbers to make it happen” and indicated how the goal of purging Congress had been emboldened by Trump: “We’ve got a fucking president, we don’t need much more.”

In a separate court filing from early July, the Justice Department further described a seditious conspiracy case involving groups of Oath Keepers from Florida, North Carolina, and elsewhere who had allegedly trained for “unconventional warfare.” The filing made public new details of anticipated trial evidence: In addition to an arsenal of firearms stashed in a hotel just outside of downtown DC on Jan. 6, various Oath Keepers involved in the conspiracy possessed bomb-making instructions and a “death list” targeting a Georgia election official, according to court records. An unindicted co-conspirator facing other charges allegedly transported explosives to Washington as part of plans to fight for Trump.

The House committee laid out how Trump moved to light a fuse with far-right extremists beginning about three weeks before the siege.

During a July 12 hearing, the House committee laid out how Trump moved to light a fuse with far-right extremists beginning about three weeks before the siege. In a prolonged Oval Office confrontation the night of Dec. 18, 2020, Trump was thwarted by White House Counsel Pat Cipollone and other legal aides from using baseless conspiracy theories about voter fraud to make extreme moves to take over the US election system. Trump then began to focus on other means to achieve his goal of staying in power, sending out a now infamous tweet at 1:42 a.m. on Dec. 19: “Big protest in D.C. on January 6th,” he said, kicking off a series of efforts by him to draw a massive crowd of supporters to the nation’s capital. “Be there, will be wild!”

“One of the most historic events in American history has just taken place,” announced high-profile media agitator Alex Jones in a video posted later that day. President Trump, he said, “is now calling on we the people to take action and to show our numbers.”

Other commentators took the theme further. “Red wave, bitch. This is going to be a red wedding going down January 6,” declared one pro-Trump YouTuber, referring to the well-known scene of mass slaughter from Game of Thrones. “January 6, kick that fucking door open. There are gonna be a million-plus geeked up, armed Americans.”

The House committee gave further examples of the subsequent deluge of online extremist activity—long since detailed in court documents and in news and government reports—showing how Trump supporters throughout the country armed and mobilized for violence.

None of that response should have come as a surprise. As I first reported in late 2020, leading national security experts began warning after Trump’s election defeat that he was escalating his use of stochastic terrorism, a method of propagandizing that stirs extremist supporters to violent action. As president, Trump had honed the technique of couching the incitement in plausible deniability. He used ambiguous rhetoric and routinely hid behind claims to have been just “joking”—whether he was targeting the media as the “enemy of the people,” talking of “some very fine people” alongside neo-Nazis in Charlottesville, urging armed mobs to “liberate” state capitols over pandemic restrictions, or encouraging the Proud Boys to “stand back and stand by” in the run-up to the presidential election.

“He is promoting terrorism,” Juliette Kayyem, a former assistant secretary at the Department of Homeland Security in the Obama administration, told me in December 2020. “There is a reluctance to identify the kind of violence that Trump is propagating,” she added, “maybe because it seems too close to calling him a terrorist. You can call him whatever you want, but the tactics he’s using are clearly a form of terrorism.”

“The tactics he’s using are clearly a form of terrorism.”

Elizabeth Neumann, a counterterrorism expert who served as an assistant secretary at DHS under Trump until early 2020, called out his “coded support” for violent extremists in a Washington Post op-ed that October. “Language from campaign materials and Trump’s extemporaneous speeches at rallies have been used as justification for acts of violence,” she wrote. Kori Schake, a former national security leader in the George W. Bush administration, described Trump that December as “an arsonist of radicalization.”

By the evening of January 5, 2021, Trump’s elation about the next day was clear, according to testimony from former White House deputy press secretary Sarah Matthews. Tens of thousands of his supporters had converged on Washington, legions of them motivated by Trump’s election lies. Many were armed. Many had gathered for a rally at Freedom Plaza close to the White House, taking in firebrand speeches from Trump backers including Roger Stone and Ali Alexander, who led the crowd in a chant of “Victory or death!”

That night, Trump had the door of the Oval Office opened to the Rose Garden, Matthews told the House committee. “It was so loud that you could feel it shaking in the Oval. He was in a very good mood…he had not been in a good mood for weeks leading up to that. And then it seemed like he was in a fantastic mood that evening.”

Trump also put out a telling tweet that night. I included it in my reporting published on the morning of January 6, just hours before the assault on the Capitol, in a story headlined, “Trump Is Inciting Violence Over His Election Defeat.” Trump’s message in the tweet corroborates Matthews’ testimony:

Washington is being inundated with people who don’t want to see an election victory stolen by emboldened Radical Left Democrats. Our Country has had enough, they won’t take it anymore! We hear you (and love you) from the Oval Office. MAKE AMERICA GREAT AGAIN!

In prime time on Thursday night, the House committee plans to hear live testimony from Matthews and former deputy national security adviser Matthew Pottinger, as the committee focuses on Trump’s actions and communications while Congress was under siege. Little is yet known publicly about what Trump did inside the White House for more than three hours during the violence and mayhem. Trump’s activity during a specific period of 187 minutes has essentially remained a black hole.

According to Republican Rep. Adam Kinzinger, who spoke on CBS News’ Face the Nation on Sunday, the committee will show that Trump did very little other than “gleefully watch television during this timeframe.” The president should have been “going ballistic to try to save the Capitol,” Kinzinger said. “He did quite the opposite.”

The committee also plans to show outtakes from a speech Trump recorded and eventually put out on Jan. 7, after advisors had implored him to declare the election over, condemn the violence and call for accountability for those who stormed the Capitol. Trump resisted, according to the Washington Post, instead trying to call the rioters “patriots.”

That followed a short statement recorded on the White House lawn and posted late in the day on Jan. 6, in which Trump reiterated his election fraud lies and told the rioters to go home in the name of law and order. “We love you. You’re very special,” he said, adding, “I know how you feel.”

“It’s very clear that watching this violence was part of the plan,” said Democratic Rep. Elaine Luria, another committee member, according to the Post. “He wanted to see it unfold. And it wasn’t until he realized that it was not going to be successful that he finally stood up and said something.”