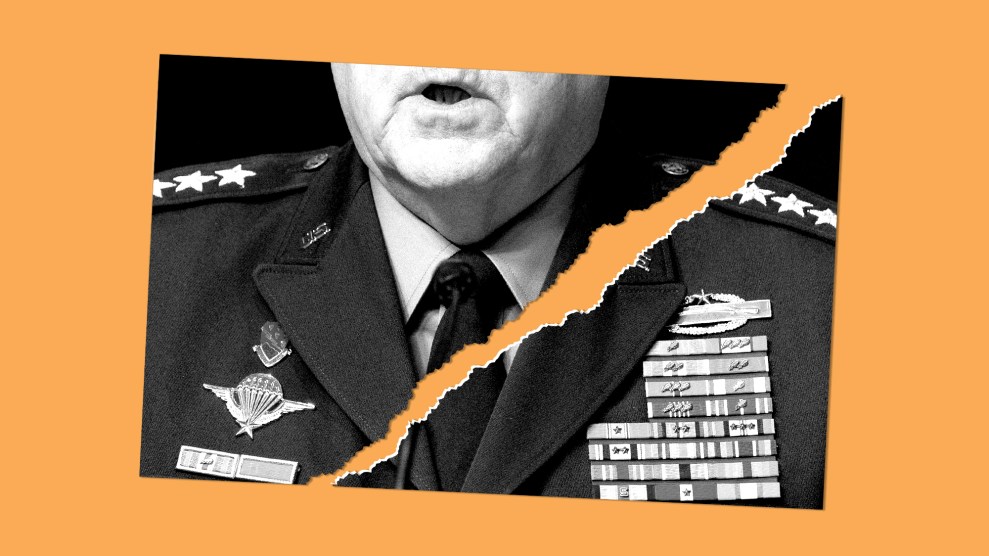 On Monday, the New Yorker reported that Donald Trump once asked his chief of staff, retired Marine Corps General John Kelly, “You fucking generals, why can’t you be like the German generals?”

The article goes on to detail the many efforts made by General Mark Milley—Trump’s pick to serve as the chair of the Joint Chiefs of Staff—to prepare for a potential Trump-led coup. Milley feared that the former president’s “Hitler-like” embrace of the Big Lie would cause him to search for a “Reichstag moment” like the one the Nazis used to help establish a dictatorship.

The reporting by New Yorker staff writer Susan Glasser and New York Times chief White House correspondent Peter Baker focuses on Trump’s relationship with his generals. What lies beyond its scope is just how far Trump’s disdain for military leaders has spread throughout his party. Republican candidates and elected officials have now made attacking generals and their supposed “wokeness” a mainstay of their midterm rhetoric. After decades of fealty, they now portray military leaders as effete swamp dwellers who are too busy focusing on diversity initiatives to prepare for winning wars.

Trump’s supporters know that he did not have the military on his side as he tried to steal the 2020 election. That will not necessarily be the case next time.

Trump’s supporters know that he did not have the military on his side as he tried to steal the 2020 election. That will not necessarily be the case next time. Trump or some other anti-democratic president could install generals like Michael Flynn, who suggested after Trump lost that the former president could have the military “rerun” the election, use the Defense Department to seize voting machines, or declare martial law.

Milley, who is still leading the Joint Chiefs of Staff, has become Republicans’ most common target after telling Congress last year that he wanted to understand the sources of “white rage” and the forces that “caused thousands of people to assault this building and try to overturn the Constitution of the United States of America.” His support for anti-racism and anti-extremism training for soldiers is portrayed as tantamount to waving a white flag in front of the Chinese regime. Tucker Carlson has called him “stupid” and a “pig.”

Carlson is far from alone. Blake Masters, whom the Fox News host has called the “future of the Republican Party,” devoted a video to attacking the “woke corporate bozos” leading the military.

Our top generals have turned into woke corporate bozos, and our troops deserve better. pic.twitter.com/kC4fgSeEZR

J.D. Vance, who, like Masters, has been bankrolled by his old boss Peter Thiel, shared a story on Twitter about China testing hypersonic missiles with the comment, “Meanwhile our generals are focused on white rage and the manicure policy of the armed forces.” In a “rescue plan” outlining what Republicans will do if they take back Congress, Sen. Rick Scott (R-Fla.) called for firing military leaders who prioritize “racial politics over the security of our country.” Trump has been more blunt, labeling Milley a “fucking idiot.”

Republicans have turned inwards. The military is no longer the institution to be worshiped. It is now the cops—who take on BLM protesters, antifa members, and undocumented immigrants—who are the real heroes.

The rhetoric grows more baroque the further one descends into right-wing echo chambers. A typical article in the American Mind, a publication of the Claremont Institute, the think tank affiliated with Stop the Steal lawyer John Eastman, urges American parents to not let their kids join the military and concludes by saying, “It is time to restore republican virtue, to sweep clean our military establishment.” In another article, the same author, a twentysomething former Marine officer, asks Americans to start “cyberbullying their generals.”

As the journalist Daniel Denvir has discussed, many Republicans have turned inwards. The military, with its focus on enemies abroad, is no longer the institution to be worshiped. It is now the cops—who take on BLM protesters, antifa members, and undocumented immigrants—who are the real heroes. (Law enforcement quickly loses legitimacy when it goes after their side by, for example, raiding Mar-a-Lago.)

Eaton, who retired from the Army in 2006 and is now an outspoken Trump critic, referred me to a pro-Trump letter published after the election that was signed by 124 retired generals and admirals. The letter frames the 2020 election as a battle between “supporters of Socialism and Marxism vs. supporters of Constitutional freedom and liberty.” After making noise about “election integrity,” it warns that Democrats’ efforts to expand voting rights would instead allow them “to forever remain in power violating our Constitution and ending our Representative Republic.”

These officers are all retired, but, as Eaton pointed out, they can be recalled to active duty by a future president. Flynn was the most obvious name missing from their letter. He too can be recalled, Eaton says. (The Pentagon did not respond to a request for comment about the potential for that to happen.) An easier option for a Trumplike president could be to promote allies that are still on active duty. Either way, the result would be the same: A general corps that is loyal to an individual, not the nation they swore an oath to protect against enemies foreign and domestic.

This is not an abstract possibility. As Jonathan Swan reported for Axios last month, sources close to the former president have said that going after America’s national security apparatus—including the “woke” generals—would be a top priority for Trump if he returns to office.

Sources close to Trump have said going after America’s national security apparatus—including the “woke” generals—would be a top priority if he returns to office.

None of this to say to that American generals are above reproach—far from it. One notable example is Marine Maj. General Smedley Butler, who later regretted his role as “racketeer for capitalism” while deployed roughly a century ago in Cuba, the Philippines, China, Honduras, Nicaragua, Mexico, the Dominican Republic, and Haiti. But, as Jonathan M. Katz recounts in a recent biography, Butler’s track record was much better when it came to defending democracy at home.

In 1934, a bond salesman named Gerald MacGuire approached the then-retired two-time Medal of Honor recipient. He wanted Butler to put a stop to the New Deal by leading a 500,000-man coup. Butler said he was interested.

“I am interested in it, but I do not know about heading it,” he reported replying. “I am very greatly interested in it, because you know, Jerry, my interest is, my one hobby is, maintaining a democracy. If you get these 500,000 soldiers advocating anything smelling of fascism, I am going to get 500,000 more and lick the hell out of you, and we will have a real war right at home.”

Nearly a century later, in the wake of a coup attempt that progressed much further, Rep. Liz Cheney (R-Wyo.) asked Flynn if he believed “the violence on January 6 was justified morally.”

“Take the Fifth,” he replied.

“Do you believe the violence on January 6 was justified legally?” Cheney followed up.

“General Flynn, do you believe in the peaceful transition of power in the United States of America?”