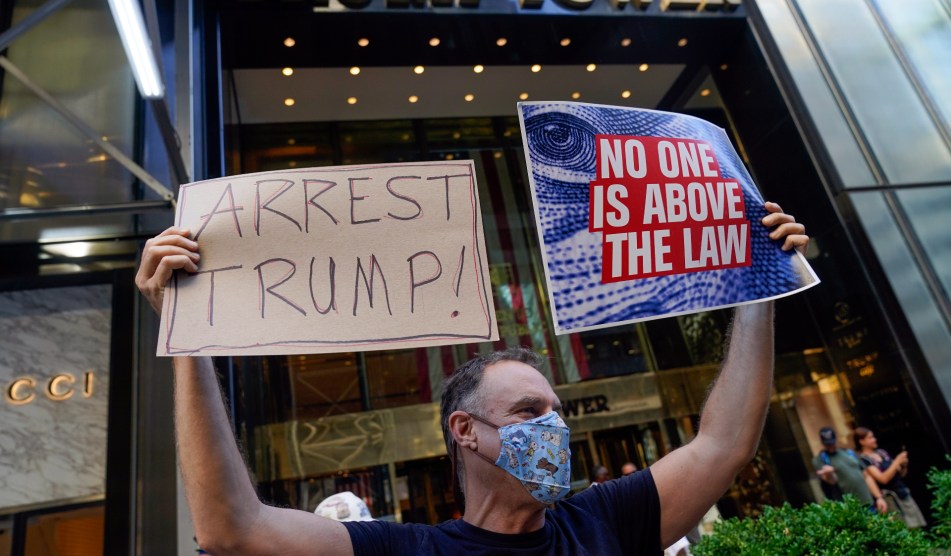 Last night, the Federal Bureau of Investigation searched Mar-a-Lago, former President Donald Trump’s residence in Palm Beach, Florida. According to multiple reports, the search was for files the twice-impeached, former president took from the White House. Trump, who may run in 2024 after his decisive loss in 2020, released a statement saying the cops broke a safe in what he called a “raid.”

So after all the chaos, what do we know? Less than you’d expect—and much less than you’d expect after opening up social media. Today, you will hear a great deal of bullshit. Rumors will spread. Good jokes will be taken too seriously. Threads will start with “Hi, I’m an expert in some-random-crap” and end in drivel.

Here is the running list of news items the New York Times has published on the topic. And below, I’ve answered some basic questions that should help you get through the day with some semblance of…dignity. Good luck.

Before we even get into this, can I just see the Trump statement?

May I have a summary?

Yep. He is upset and categorized the FBI search as a politically motivated “raid.”

And he says they broke a safe.

We don’t know yet. And we don’t know what they’re looking for. According to reports, Trump took documents (potentially illegally) to Mar-a-Lago. That’s basically all we’ve got so far. Speculation is fair game (but not here and not now).

Is this about Trump flushing papers down the toilet?

Not that we know of. In Maggie Haberman’s soon-to-be-published book, she noted sources saying White House toilets were clogged from Trump flushing documents down them. Yesterday, Axios published a picture that they say were of some of them. The investigation is about documents and hiding them so, you never know. It could end up with the former president being required to disclose whether he flushed some and stashed others he never should have removed from the White House in the first place.

Can this search stop him from being President?

“It’s complicated,” as my colleague David Corn wrote, responding to the question of whether Trump could get into trouble for getting rid of documents. Here’s an important note on that from the piece David wrote:

Yet if there were a prosecution [for destroying documents] could Trump, if found guilty, be disqualified from running for president? That provision [of the law disqualifying him] could run smack into the Constitution, which establishes only three qualifications for a president. (The president must be at least 35 years of age and a natural born citizen and must have lived in the United States for at least 14 years.) Noah Bookbinder, the president of Citizens for Responsibility and Ethics in Washington, which has called on the Justice Department to investigate whether Trump violated the law by destroying records, says that the disqualification provision poses “difficult legal questions which we, and the Justice Department and courts, would have to work through, but that we think it’s important for DOJ to investigate these likely violations and act to bring about accountability whether or not that provision is applicable.”

Let’s just say, that there will be serious blowback if he were to be stopped from running for president again. Remember January 6?

My colleague Inae Oh has rounded that up here: They are mad. (Interestingly, the GOP House has tweeted about it, including leader Kevin McCarthy, but the Senate has not.) Republicans have been joined by Andrew Yang and Andrew Cuomo. Or, as I like to call them: The Andrews.

Yeah, Trump stalwarts (predictably) are pissed that the FBI isn’t focusing its considerable energies on looking into Hunter Biden’s foreign business dealings. Of course, there is a federal investigation into those business activities and Hunter’s taxes, which is ongoing. (His lurid photos published in the New York Post are of less concern.)

Yes. They’re saying she should’ve been arrested. Trump referenced her emails in his statement about the search.

And generally conspiracies about who controls the Deep State and the FBI?

Yes. But good to note that the FBI is led by Christopher Wray. He’s a Republican. Trump appointed him.

Did you see the video where that woman screamed “fuck you” outside Mar-a-Lago?

I had to look it up. Thank you.

one thing i will say is that the lady yelling "fuck you" really put her whole heart into it and i hope we can all find that kind of passion one day https://t.co/7aXCP98a4N

Is the “raid” another Watergate?

Trump, in a statement, called the FBI searching his home equivalent to the burglars raiding the Watergate hotel during the Nixon administration to spy on his Democratic opponent. Based on what we know so far, this is not Watergate because this does not appear to be a campaign orchestrated by President Joe Biden to attack a political opponent. Also, Richard Nixon is dead. But let me defer to my colleague David Corn again:

Let’s make this simple: the Watergate break-in was a crime conducted by criminals. This raid was conducted by law enforcement officers who are supposed to catch criminals. https://t.co/U8rN7P44wh

Why hedge the language so much there? Why the “does not appear”?

We don’t know what the FBI did and why—yet. It looks fine, based on what is known. But the agency has done some heinous things in the past, and some suspicion here never hurts.

But is it like Watergate in the other way? As in a sneaky and mendacious president going a bit too far?

A president is embroiled in a scandal meticulously followed by the press that blooms and blossoms and has legitimately bad things in it but…it also has to do with mundane codes of conduct broken as a potential cover-up is orchestrated.

So, when looking for some kind of historical precedent, we have Watergate. Or at least the high-level efforts to obstruct justice after the crime. One thing that will certainly happen is that Trump will double down on the idea that this is all a plot against him. Nixon did the same thing.

The journalist and historian Garry Wills once noted, in a New York Times review of a Nixon insider’s book, that there was an assumption by Republicans that Watergate was little more than a media hit job by those reeling from the power of the rising GOP; Nixon “had to be destroyed because he posed such a threat.” In 1992, Nixon told an interviewer that the press wanted to end his career because, in his quest to create a new conservative majority, the reporters would be displaced.

“I was going to get conservatives in there to take these people on,” Nixon said. “That’s why in ’72 they had to bring me down. They knew that I was after them and that I’d succeed.”

Yes. You’ll see people dunking on it today. But, sorry, I’m hopeful at heart: Can someone send her a copy of Ruth Wilson Gilmore’s new book of collected pieces on abolition and liberation? You never know what could happen.

What the hell is MAL?

It means Mar-a-Lago. I don’t know why, suddenly, last night—as my colleague Tim Murphy noted—people started using this acronym. But if gripped by some fervor, you too typed it… now would be a good time to stop. I would add to that short list of words to stop typing, “no one is above the law” (according to liberals on Twitter) and “there are consequences for us all.”

everyone's suddenly acting like "MAL" is an acronym we agreed to use.

Are those guys who used to hyperventilate about Robert Mueller’s investigation and draw over-sexualized comics about him still around?

But they must be losing their minds.