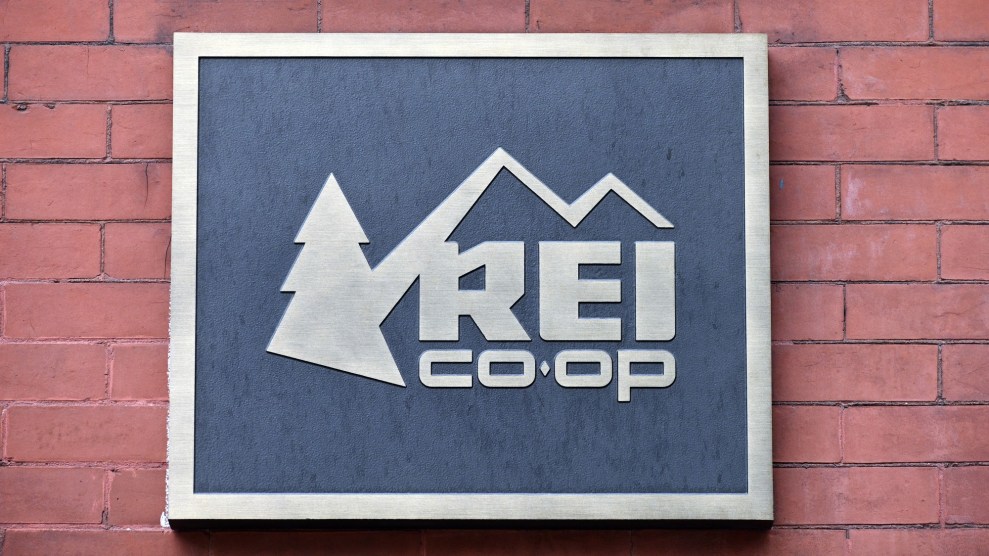 With a big win in California, REI's new union is going coast-to-coast.Anthony Behar/SIPA/AP

Some people hike from coast to coast. Others unionize. In Berkeley, California, trailblazing workers at Recreational Equipment, Inc.—the leading retailer for people who like to touch grass—voted Thursday to join the United Food and Commercial Workers’ 30,000-strong Local 5, breaking 56-38 in favor. The victory makes them the second REI branch to organize, following in the footsteps of workers at the company’s Manhattan flagship store, which unionized in March.

REI’s management likes to invoke the company’s progressive credentials, especially by emphasizing that the company is a “cooperative”—a “different kind of company,” as they put it. But as I’ve reported before, REI isn’t a worker co-op, where staff get a decisive stake in ownership, pay, and benefits:

Emphasizing the word “co-op” is a clever rhetorical move on REI’s part: For many of us, the term evokes farmers’ markets and stands run by barefoot hippies. We’re probably thinking of worker co-ops, which are slowly becoming more popular throughout America—and REI probably knows the phrase has an appealing ring for outdoorsy, left-leaning consumers. In a worker co-op, the workers own the business, typically sharing profits in ways the worker-owners have reached consensus on.

That’s not what REI does. REI is a consumer co-op: a buyers’ club meant to give bulk discounts and better deals to customers. Technically, the consumers own the company, buying in with a $20 lifetime membership that includes benefits like an annual dividend on future purchases, exclusive sales, and the ability to vote for their board of directors.

The “Greenvests,” as REI’s workers call themselves, are pushing the company to establish a culture they say is more in line with the progressive values it preaches. “We want to be a part of developing the agreements that impact every aspect of our working lives,” the Berkeley union’s organizing committee wrote to store management in a letter signed by 12 employees. “We don’t just want to be heard—we want to be active stewards of our store alongside you.”

The Berkeley store is significant for the company. Opened in 1975, it was REI’s first store outside the Seattle area. It’s huge, boasting nearly as many staff as the SoHo REI that unionized earlier this year. Now, its workers see an opportunity to pitch their tents under clearer skies: they’ve alleged understaffing, overwork, and racist behavior by some managers. Workers said that a meeting they believed would address their concerns about racism turned out to be a captive-audience anti-union lecture, according to Liberation News.

If you’ve followed the company’s union fights, you might not be surprised. Last time around, senior executives hosted a now-notorious podcast—workers alleged union-busting then, too, but at least management acknowledged that it was taking place on Indigenous land.

“REI believes in the right of every employee to vote for or against union representation,” the company wrote in an email. “We fully supported the vote process in Berkeley and will continue to support our employees going forward.”

And that’s exactly what their employees seem to be doing, perhaps dragging their bosses by the hiking boots.