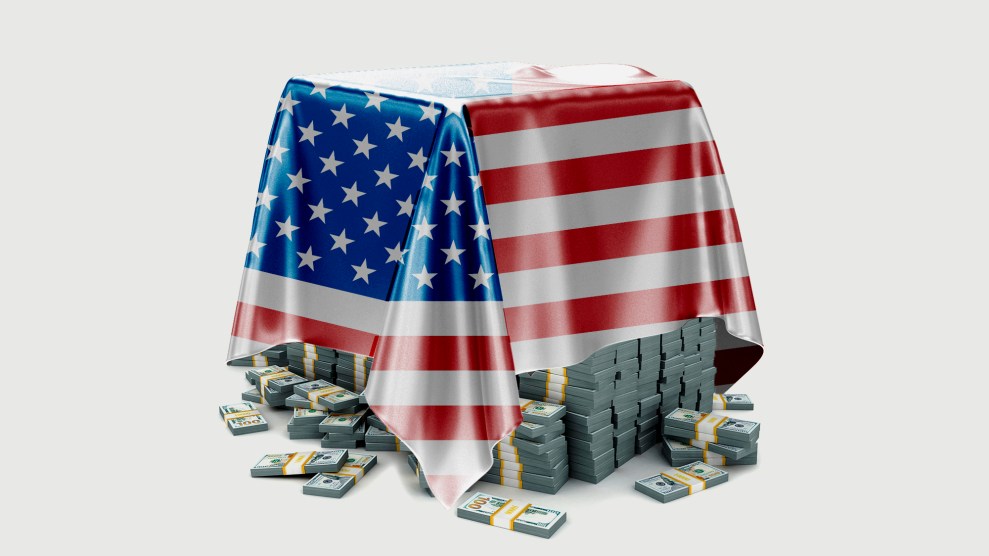 During the mid-1990s, trust and estate lawyer Jonathan Blattmachr had an innovative idea that would come to revolutionize the American trust industry. Blattmachr is a veteran of the wealth management field, cutting his teeth at the famous white shoe law firm Milbank, Tweed, Hadley & McCloy, wealth managers to the Rockefellers and other dynastically wealthy families.

Then based in New York, he knew about the success of offshore jurisdictions—places like the Cayman Islands and the Cook Islands allowed super-rich Americans to secretly stash their wealth overseas, hidden from creditors and the tax man. But many of his clients, he believed, would not “want to have their assets in a place they couldn’t find on a map.”

What if, Blattmachr thought, the offshore came onshore?

When Blattmachr proposed that New York allow onshore asset-protection trusts, “people thought I was absolutely out of my mind.” So he took his idea to Alaska instead.

With traditional trusts, you have the grantor (a.k.a. the client) who creates the trust and puts it in the care of a third-party trustee for the benefit of his beneficiaries—usually the grantor’s spouse or children. When offshore banking centers were first emerging, a major attraction was that they allowed grantors to create what’s known as an “asset protection” or “self-settled spendthrift” trust and house it offshore. Such trusts can be established for a very specific beneficiary: the grantor himself. (Most grantors are male.) By claiming he no longer owns the assets—in a way, they belong to the trust—he is able to avoid wealth-transfer taxes such as the estate tax, and dodge creditors, too. The intention is to put the grantor’s assets in an “ownership limbo,” which obfuscates his legal responsibilities.

That’s what was going down offshore in the 1980s and 1990s. Blattmachr was riveted by the question: What if the United States hosted these trusts, too? You could have domestic asset protection trusts. He brought his idea to the trusts and estates law section of the New York State Bar Association, and was “unanimously shot down,” as Blattmachr told the trade publication Tax Notes in 2016. “People thought I was absolutely out of my mind.” See, some lawyers deemed the purpose of an asset protection trust—allowing people to insulate their money from creditors—a form of fraud.

But Blattmachr wasn’t discouraged. He moved on to Alaska, figuring a state with such a small population and small state legislature might be an easier mark.

And so it was. In 1997, sold on the economic development boom they were assured was all but inevitable, state legislators passed the Alaska Trust Company Act, drafted by Blattmachr and other trust lawyers. Alaska thus became the first state to authorize domestic asset protection trusts (DAPTs).

Fast forward 25 years, and Alaska is a major trust jurisdiction, with Blattmachr at the helm as director of estate planning for Alaska’s Peak Trust Company. Eighteen other states have since followed in Alaska’s footsteps and passed their own DAPT legislation.

Like Blattmachr in Alaska, scores of trust and estate lawyers have remade state-level trust legislation in their own images for the benefit of their industry.

South Dakota, which has a state-sanctioned task force writing industry-friendly legislation, was placed in an uncomfortable spotlight in the fall of 2021—as were Alaska, Delaware, Nevada, and Wyoming—when the International Consortium of Investigative Journalists released the Pandora Papers.

The papers revealed a hidden world of shady global tax practices and detailed the United States’ transformation into an international tax haven. But it’s not exactly the United States—not all of them—serving as a tax havens quite yet. Just the handful that have allowed the wealth management industry to capture their legislatures and convert them into mini tax havens largely unchecked by federal law.

In a new Institute for Policy Studies report, “Billionaire Enabler States: How U.S. States Captured by the Trust Industry Help the World’s Wealthy Hide Their Fortunes,” my colleague Chuck Collins and I take a detailed look at this realm, profiling the big names in trust creation, and examining how individual states, eager for revenues, are passing new trust legislation and rolling back taxes, all for the benefit of the extremely wealthy.

Thanks in part to these changes, America was the repository for some $5.6 trillion in trust and estate assets as of 2021, according to estimates by inequality researchers Gabriel Zucman, Thomas Piketty, and Emmanuel Saez. This is likely a conservative figure. The reality is, industry secrecy and lax disclosure laws make it all but impossible to truly know how much trust wealth is being held in the United States. But ultimately, we find that three key state features—low or no taxes, trust secrecy, and trust longevity—make states especially attractive to the trust industry.

The complexity is the point. If trust policy were easy for the public to understand, state legislatures would be less likely to pass laws enabling the industry.

What exactly sets these trust jurisdictions apart from the other states? There are trust companies and a trust industry in every state, after all. But not every state legislature is a tool of the industry. Some work to woo ultrawealthy trust grantors. Others resist, showing accountability to constituencies other than trust industry lobbyists.

The states vying hardest for trust business have eased the burden of taxation on the rich. The top trust jurisdictions generally lack individual income taxes and inheritance taxes. Instead, they tend to rely on taxes that disproportionately affect the poor, such as property and sales taxes.

Alaska doesn’t have an income tax. When it considered one in 2015, Blattmachr’s brother and business partner, Douglas Blattmachr, wrote to the legislature threatening that if trusts were taxed, “we would have to shutter our business and move to another more favorable state.”

Alaska doesn’t have a statewide sales tax, either, but most localities levy them. Additionally, the state’s property tax system is regressive, requiring higher taxes as a share of income from the poor vs. the rich.

It should come as no surprise, then, that seven of the 13 trust states we profiled are among the 10 states with the most unequal and regressive tax policies, according to a ranking by the Institute on Taxation and Economic Policy.

In 2017, even as the state stared down a nearly $400 million budget gap, Delaware passed legislation repealing its estate tax. “The very wealthy don’t have to move down to Florida,” an estate lawyer told Forbes after the bill’s passage, invoking the common argument that the rich will leave a state (or a country) if overtaxed. The same argument was used by a group of lawyers lobbying Delaware’s governor, never mind that most people who set up trusts in a given trust jurisdiction don’t actually live there.

Trust jurisdiction states have also ensured that the billionaires who choose to park their wealth there can avoid federal taxes for generations—and possibly forever.

The aforementioned domestic asset protection trusts are one method the industry uses to “protect” its clients’ assets—a noble way to describe tax avoidance. By crafting state laws and policies that benefit wealth firms and their customers, the trust industry has made tax avoidance legal, if not exactly ethical. DAPTs can shield generations worth of investment profits from the tax man, and also from creditors that might include, say, a former spouse who is owed alimony.

Most US states have weakened or abolished the centuries-old common law “rule against perpetuities,” enabling the creation of tax-free dynasty trusts that can last, in theory, forever.

Another method—weakening or abolishing the so-called rule against perpetuities—allows tax avoidance in the form of a “dynasty trust” that can last so long that a wealthy family indeed becomes a dynasty.

When trust lawyers mention the rule against perpetuities, they often joke about how it’s a topic everyone hates in law school. They’re right that the concept is complicated, but the complexity is the point. If trust policy were easily understood by the public, more people would put up a fuss, and state legislatures would be less likely to pass laws enabling the industry.

The centuries-old rule against perpetuities, which came to America via British common law, pertains to the length of time a trust can last. The rule came about during feudal times to disrupt concentrated wealth and limit the power a grantor’s “dead hand” could exert over his heirs from the grave. Back then, a wealthy man could place a valuable asset—his estate, for example— in trust for future generations. He could allow whomever he liked to use it, and dictate the manner in which it could be used, still controlling the property long after he died.

Under the rule against perpetuities, a trust could no longer last forever. It had to vest within “life in being”— the lifespan of the youngest beneficiary alive at the time of the trust’s creation—plus 21 years. In effect, the rule limited trusts to a lifespan of roughly 90 years. That wasn’t enough for the extremely wealthy.

South Dakota abolished its rule against perpetuities in 1983. Today most states have abolished it, or weakened it enough to allow for the creation of dynasty trusts—trusts that can last for generation after generation, and facilitate the formation of actual dynasties. The Waltons, the Mars, and the Kochs are just a few examples of wealthy families who have created dynasty trusts, but be on the lookout for new ones—Bezos and Musk dynasties perhaps?

That is unless, of course, we do something about our trust jurisdictions. It won’t do for one state to crack down on trusts—the industry will simply move to a different state. The change has to come from the federal government.

Proposed solutions include taxing wealth held in trusts—thus limiting legal tax avoidance—and passing a federal rule against perpetuities, so that wealth can no longer grow in trust, virtually tax-free, forever. A federal registry of trusts would also go a long way to ensure that secrecy, the name of the game in the trust industry, is curtailed—and that the owners of the trusts are recognized as the owners of the trusts’ assets.

The arcana of estate-planning policy may not be the scintillating stuff of activist dreams. But if the American public hopes to curb the power of multimillionaires and billionaires over our elections, economy, policies, and, indeed, over the lives of what heiress Leona Helmsley, convicted in 1989 of income tax evasion, derisively called “the little people,” we’re going to have to tackle their trusts first and foremost.