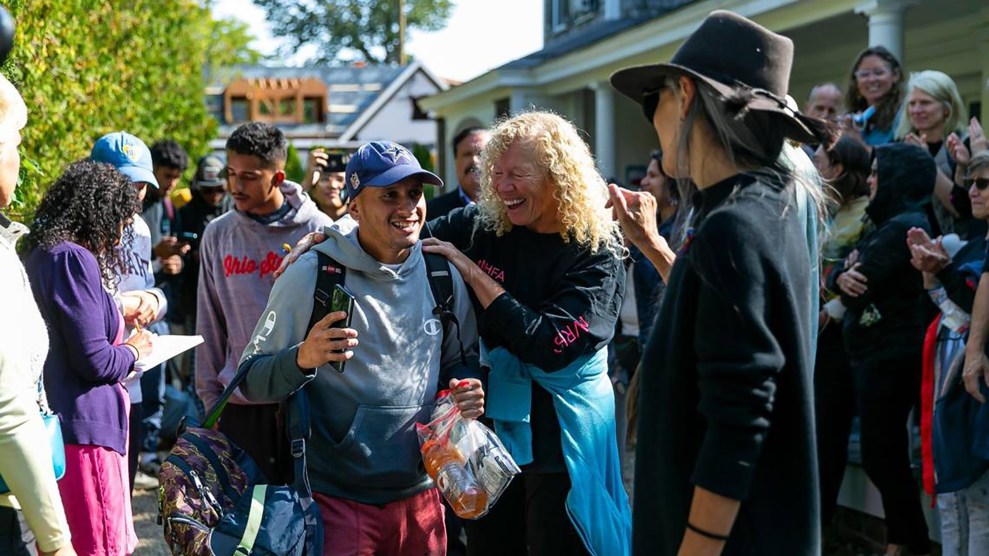 A Venezuelan migrant reacts as he is led onto a bus on the island of Martha's Vineyard. Matias J. Ocner/Miami Herald/ZUMA Press

On May 22, 1962, Victoria Bell and her 11 children, ranging in age from two to 14, arrived in Hyannis, Massachusetts, after a days-long bus ride to Cape Cod from Little Rock, Arkansas. Amis Guthridge, an attorney and the leader of the southern segregationist group, the Capital Citizens’ Council, gave Bell $60 and paid for the family’s one-way tickets north. Bell was forced to care for her children with little support after her husband left and the local government cut off her welfare. In a photo from that time, she and her sons and daughters can be seen waving in front of a sign for the Cape Cod Community College, which had been turned into temporary housing for her and other families. “I hope my children get a better chance here,” Bell told the Boston Globe. The following day, Lela Mae Williams, a mother of nine from Huttig, Arkansas, disembarked from a Greyhound bus at a stop near President John F. Kennedy’s summer home in Hyannis. She had heard about “free rides” on a Louisiana radio station and been lured by promises of housing, job prospects, and a presidential welcome at their final destination.

It was all a cruel hoax.

Bell and Williams were among almost 100 people to be shipped under false pretenses to the resort town over the spring and summer of 1962 as part of a white supremacist campaign to send Black people from the South to northern cities. Overall, some 200 people were bused to Chicago, Cleveland, New York, Los Angeles, and other cities in Indiana, Idaho, and New Hampshire. The political ploy was a retaliation for the Freedom Rides from the previous year, when a group of 13 Black and white civil rights activists with the Congress of Racial Equality (CORE) embarked on southbound buses from Washington, DC, to protest continued segregation in interstate transportation despite the Supreme Court having ruled that it was unconstitutional. What became known as the “Reverse Freedom Rides” was meant to embarrass liberal politicians fighting for civil rights and presumably expose their hypocrisy by confronting them with the demand to live up to their values and assist the Black southerners. “We want to see if Northern politicians really love the Negro or whether they love his vote,” Guthridge said. He framed the unapologetically racist campaign as being beneficent and humanitarian and then underscored its basic intent: “And we want to acquaint the North, which has been making the South a whipping boy with some Southern problems.”

Sixty years later, a similarly racist, cynical ploy reminiscent of the “Reverse Freedom Rides” is playing out, but this time with migrants as the innocent pawns. The historical parallels became clear after Gov. Ron DeSantis of Florida, which doesn’t share a land border with Mexico, flew 50 migrants from Texas to Martha’s Vineyard. As Jonathan Chait wrote in New York Magazine, DeSantis “had to find migrants in Texas and, essentially, kidnap them for his own use.” He was further escalating the political stunt Texas and Arizona have been carrying out for months by busing thousands of migrants from the border to Washington, DC, New York, and Chicago as a way of attacking federal government’s immigration policies and liberals generally.

In his attempt to outdo his fellow GOP governors, DeSantis’ move even overshadowed news of migrants being dropped off outside Vice-President Kamala Harris’s Washington, DC, residence. The flight to Martha’s Vineyard, where Barack Obama and Bill Clinton often vacationed, was part of “the state’s relocation program,” according to the Florida Governor, who told reporters “We are not a sanctuary state, and it’s better to be able to go to a sanctuary jurisdiction, and yes, we will help facilitate that transport for you to be able to go to greener pastures.” (The Massachusetts Supreme Court ruled in 2017 that local law enforcement can’t detain individuals solely for immigration purposes, but Republican Massachusetts Gov. Charlie Baker has opposed legislation to codify sanctuary status in the state. Still, eight cities including Boston limit cooperation with federal immigration authorities.)

The migrants who arrived at the island explained to reporters that they had been told there would be work, food, and housing waiting for them, which was “a sadistic lie,” as Martha’s Vineyard immigration attorney Rachel Self wrote in a statement “Not only did those responsible for this stunt know that there was no housing and no employment awaiting the migrants, they also very intentionally chose not to call ahead, to any single office or authority on Martha’s Vineyard, so that even the most basic human needs arrangements could be made. Ensuring that no help awaited the migrants at all was the entire point.”

Other migrants told NPR they thought they were heading to Boston where they would have access to work papers. Massachusetts state senator Julian Cyr noted, “This endeavor is a cruel ruse that is manipulating families who are seeking a better life. No one should be capitalizing on the difficult circumstances that these families are in and contorting that for the purposes of a ‘gotcha’ moment.”

“One of the threads connecting these events is the underlying racism and white supremacy motivating those who are using migrants as pawns in a large political game.”

But the historical throughline between these two events seems clear. “One of the threads connecting these events is the underlying racism and white supremacy motivating those who are using migrants as pawns in a large political game,” Elisa Minoff, a historian and senior policy analyst at the Center for the Study of Social Policy told me. “That was very clear in the 1960s and I think it’s equally clear now.”

Stop and watch this video.

Whatever you thought about the governors' stunt… it turns out it was worse.pic.twitter.com/GASpsChOzl

Then, as now, Minoff said, migration was a highly politicized issue and politicians used it to score points. Back in 1962, the Reverse Freedom Rides campaign started in Louisiana and quickly spread among White Citizens’ Councils in Georgia, Arkansas, and Mississippi. As Clive Webb wrote in a 2004  Journal of American Studies article, “A Cheap Trafficking in Human Misery”: The Reverse Freedom Rides of 1962, segregationists “had failed to prevent token integration of the public school system.”

In order to restore their influence, they took to increasingly desperate measures. George Singelmann of the Greater New Orleans Citizens’ Council was the architect behind the efforts to relocate some Black residents. But he described the busing as latter-day version of a great American tradition whereby, “Our forefathers put everything in their possession into covered wagons and went out across the plains.” As part of the campaign, Singelmann tried to recruit poor Black families, single mothers, and prisoners whose sentences were close to expiring. “Very truthfully, I make no bones about it. It was strictly a promotional venture,” he said. “I selected them by the number of children they had and things like that.” In other words, by what he considered to be the burden to society their presence would create.

“Free Transportation plus $5,00 for expenses to any [N]egro man or woman, or family (no limit to size) who desire to migrate to the Nation’s Capital or any city in the north of their choosing,” said one advertisement at the time. Another recruitment poster by Guthridge for prospective riders to Hyannis stated “President Kennedy’s Brother assures you a grand reception to Massachusetts. Good jobs, housing, etc. are promised.” (The ad was referring to Ted Kennedy.) Some of the new arrivals were temporarily housed at unused barracks at Camp Edwards, located on the Joint Base Cape Cod where, 60 years later, the migrants who arrived at Martha’s Vineyard by plane have been transferred.

Much in the same way as DeSantis gave Fox News an exclusive on his Martha’s Vineyard stunt, the white segregationists of the 1960s also tried to use the media to their advantage. But their plan largely backfired and the press, even in the South, was critical of the manipulation of vulnerable Black people. WDSU Radio in New Orleans described it as “sick sensationalism bordering on moronic.” Then Massachusetts Governor John Volpe said, “It is shameful that in this country there should be those who traffic in human misery.”

“They expected to have a lot more support for what they were doing than they got, both financially to pay for bus rides and general public support,” Minoff told me. “It became clear pretty quickly that it wasn’t playing out as they expected. If anything, it was increasing support for the civil rights movement and for the political leaders in the North who were not turning families away.” The white segregationists then—as the Republican governors now—didn’t anticipate that communities in the northern cities would rise to the occasion. While President Kennedy wasn’t waiting for the Bell and Williams families in Hyannis, local officials, faith leaders, and civil rights organizations opened up their arms in a show of solidarity similar to what is being showered upon the migrants of today. “Our island jumped into action putting together 50 beds, giving everyone a good meal, providing a play area for the children, making sure people have the healthcare and support they need,” State Rep. Dylan Fernandes who represents Martha’s Vineyard Tweeted. “We are a community that comes together to support immigrants.”

This is a community rallying to support immigrants children and families. It is the best of America. pic.twitter.com/qnQZYjNA9J