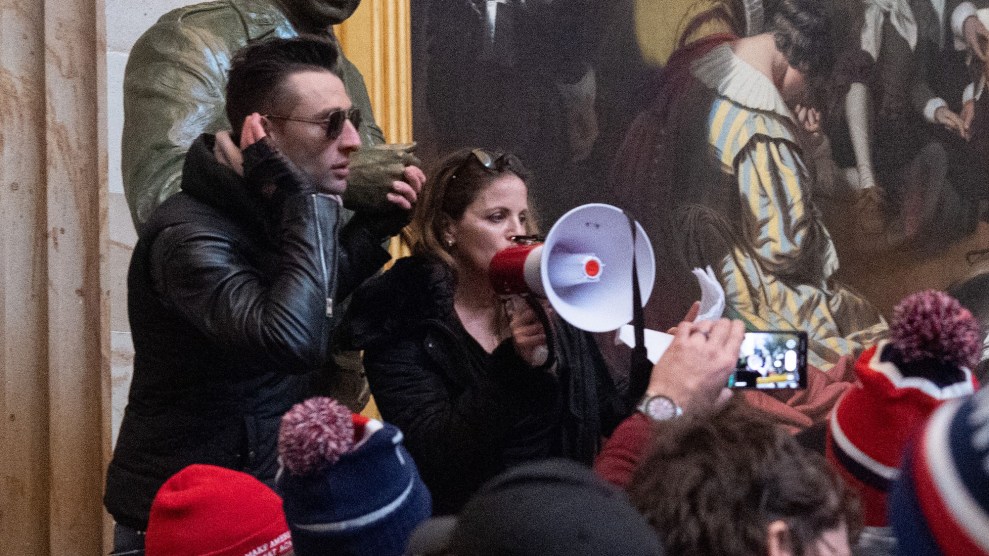 John Strand and Simone Gold inside the US Capitol on January 6, 2021. Saul Loeb/AFP via Getty Images

The image from the US Capitol riot on January 6, 2021 has been kicking around the internet for a year and a half. The centerpiece is anti-vaccine activist Simone Gold, founder of America’s Frontline Doctors, a group that has spent the past two years spreading misinformation about Covid. She’s with John Strand, an international underwear model and the spokesman for the doctors’ group. They are positioned at the front of an angry mob that has just broken down the door to the Rotunda, where a US Capitol Police officer attempts to hold them off. A hand reaches up and grabs the officer by the collar and pulls him to the ground. Gold and Strand push past and swarm into the Capitol with the rest of the rioters.

As the crowd began to force their way into the Capitol building, Dr. Simone Gold and John Strand were part of the crowd that violently pushed/pulled an officer down the stairs.

I slowed down/highlighted the pair currently being sought by the FBI.
H/T: @Cineaste_C
🎥: NyPost pic.twitter.com/nf7PGOqwJG

The image was striking for many reasons, but especially because Gold, a board-certified emergency room physician and a Stanford-educated lawyer, did nothing to assist the fallen officer. Others in the mob ultimately help him to his feet, but only after he had lost consciousness. Since the incident, Officer Joshua Pollitt has largely remained anonymous, but on Wednesday, he appeared in US District Court for the District of Columbia to testify in Strand’s trial on criminal charges related to the storming of the Capitol.

His emotional testimony was harrowing, as was the full video footage of the episode played for the jury. During the riot, Pollitt was with a group of officers guarding the East Capitol rotunda door, which is rarely open to the public. On the stand, he described how a rioter maced him in the eye during the confrontation, where he and his colleagues were violently outnumbered. Jurors watched the video in which rioters chanted “Stand down, let us in,” while Pollitt tried to hold the doors closed. At one point, smoke appears and Pollitt explained that officers had deployed a flash bang to try to repel the angry mob; it had little effect.

Gold and Strand were at the front of that angry mob, which pushed Pollitt against the door, pinning his hands at his sides. “I was crushed against the doorway,” he said, explaining that he lost consciousness and went down. “I was terrified that one of the rioters was going to get my gun and use it on one of my fellow officers.”

“I was terrified that one of the rioters was going to get my gun and use it on one of my fellow officers.”

Since their arrest less than two weeks after the riot, Gold and Strand have tried to frame themselves as free speech warriors, claiming that they were merely engaging in peaceful protest when they entered the Capitol on January 6. But what the fallen Capitol police officer described was anything but peaceful, and the video footage backed him up. Prosecutors pointed out the presence of men in Kevlar tactical gear with military-grade gas masks. “In your experience, do people usually wear Kevlar to the Capitol?” prosecutor Jason Manning asked US Capitol Police Sergeant Nelson Vargas during his testimony. “It’s not allowed,” he replied.

In the face of overwhelming documentary evidence of her participation in the riot, not to mention her acknowledgment to the Washington Post shortly after the event that she’d been inside the building, Gold quickly pleaded guilty to a single misdemeanor charge of unlawfully entering and remaining in a restricted area of the US Capitol. In June, she was sentenced to 60 days in prison. Earlier this month, she was released early with time off for good behavior. When she emerged from the prison gate, Rep. Louie Gohmert (R-Texas) presented her with an American flag that had hung over the Capitol building she had helped to sack.

Strand rejected the same plea bargain and opted to go to trial, which started this week before Judge Christopher Cooper, one of Gold’s Stanford classmates. Strand has embraced his status as a minor insurrectionist celebrity in conservative religious circles. On Sept. 12,  he gave an interview on YouTube to Brandon Straka, founder of the conservative Walk Away campaign. Strand blabbed extensively about what he did at the Capitol (and asked for donations) in a way that should make his lawyer cringe. Straka was also prosecuted, though he never entered the building. He pleaded guilty to a single misdemeanor charge for disorderly conduct and did not receive jail time because of the assistance he provided the government in its investigation. (Prosecutors accidentally released his cooperation agreement outlining all the people he’d snitched on to get a lesser sentence—including Gold.)

Strand is the first insurrectionist “influencer” to go on trial, and is arguably the most fashionable and impeccably groomed January 6 defendant. His signature undercut hairstyle, with the top carefully gelled into a rooster’s comb, leather jacket, and aviator sunglasses made him stand out in the crowd of old bearded white men, other MAGA maniacs, the QAnon Shaman, and the cammo-garbed militia types. That’s one reason why it’s so easy to see him on the videos, and one reason, a police officer testified, that people remembered him. On Wednesday, he wore a skinny plaid suit over a purple shirt, with loafers and no socks to court, and has refused to wear a mask as required. Instead, he is taking a daily Covid test and providing the results to the court. Lawyers have continued to argue before Cooper as to whether Strand can call Gold as a witness and what she might say. She was not in the courtroom Wednesday, though her adult son Jonah Gold was one of a few people there apparently giving Strand moral support.

Strand’s lawyer presented little in the way of defense during cross-examination, while the government put on hours and hours of video footage documenting his presence among the January 6 rioters. Here’s Strand with Gold, standing in front of a Confederate flag at the Rotunda door, while their fellow protesters use Trump flag poles like battering rams to break the glass. Here he is again, deep inside the Capitol in a cloud of fire extinguisher haze spread by an angry mob trying to break down the door to the House chamber. And here’s Strand filming Gold delivering a speech in Statuary Hall about the lack of government transparency in the election. Meanwhile, officers who’d spent the past two hours battling rioters and getting pepper sprayed and assaulted were trying to clear the remaining rioters from the building as Gold drew a crowd.

Here is Dr. Simone Gold giving an impromptu speech inside the building at the #DCRIOTS
Her partner, John Strand, stands back and films the erratic display.

By going to trial, Strand faces far stiffer punishment than he would have received if he’d taken the government’s offer and pleaded guilty to a single misdemeanor as Gold did. Instead, Strand is now on trial for five separate criminal charges and has said he could face a quarter-century of prison time if convicted on all counts. He is expected to testify Thursday in his own defense, where he will argue that he was simply in the Capitol providing security for Gold. His lawyer has said his defense will rely mostly on character witnesses. Closing arguments are expected on Friday when the case will be given to the jury for deliberations.