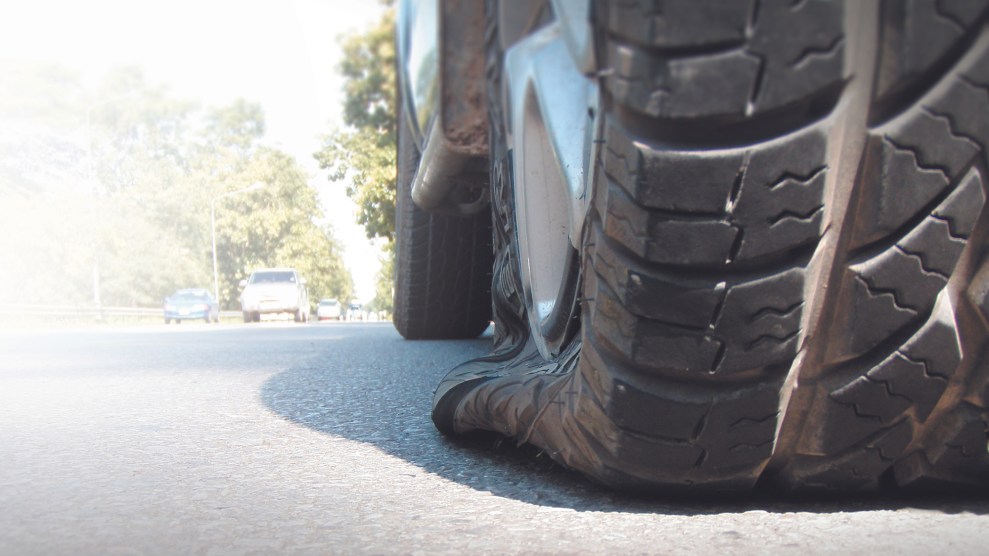 The climate activist group the Tyre Extinguishers has claimed its largest night of action yet against SUVs, with more than 600 vehicles “disarmed” across nine countries.

Over the night marking six months since the launch of the campaign, which encourages people to covertly deflate the tires of SUVs, activists took action in the UK, France, Germany, Switzerland, the Netherlands, Norway, Denmark, the Czech Republic, and Canada.

“Courageous citizens all over the world last night…deflated tyres on at least 600 SUVs, exactly two months before the opening of the United Nations Cop27 climate summit in Egypt,” the Tyre Extinguishers said on Tuesday. The group said the total was likely to rise, with more reports of actions expected.

Metropolitan police were left wondering whether deflating a car tire without damaging it is even a crime in England.

“The movement have now deflated tyres on around 9,000 SUVs in cities across the world since March, striking continuously, and look set to surpass their goal of 10,000 SUVs deflated by Christmas,” the statement added.

The group has said its aim is “to make it impossible to own an SUV in the world’s urban areas,” condemning the vehicles as “unnecessary ‘luxury emissions,’ flaunted by the wealthy, that are a climate disaster, cause air pollution, and make our roads more dangerous.”

It points to research published in 2019 by the International Energy Agency that found SUVs were the second largest cause of the global rise in carbon dioxide emissions over the past decade. But the group also opposes electric SUVs “on the grounds that they are still unsafe in urban areas.”

The campaign is coordinated via a website that hosts instructions on using lentils or other pulses to jam open the valves on SUV tires, slowly deflating them. They call on activists to conduct night-time sabotage raids and to leave on the windscreen of each vehicle a leaflet explaining to the owner why they have been targeted.

Among the SUV owners who have fallen victim to the campaign are John Browne, the former chief executive of BP, and the EastEnders actor Jessie Wallace, who posted a photo of the letter left for her by activists on Instagram, commenting: “These arseholes should be locked up.”

A source in the Metropolitan police said the force was unable to confirm Tyre Extinguishers’ claims to have launched actions in London. Inquiries within the force had turned up no paperwork about the group, he said. There was a question as to whether deflating a car tire without damaging it was even a crime.

The move towards covert action marks a shift from the stance of Extinction Rebellion, Just Stop Oil, and other recent climate campaigns, which have called on members to stand accountable for any potentially illegal actions, with their arrests and subsequent prosecutions an integral part of their protest strategy.

“The climate movement hasn’t made enough use of covert tactics so far,” said a Tyre Extinguishers spokesperson. “Ultimately we want to show people that sabotage to save lives is legitimate and that we need far more of it. If the polluters won’t stop polluting because we ask politely, we protest, we take conventional direct action—then what is left?”