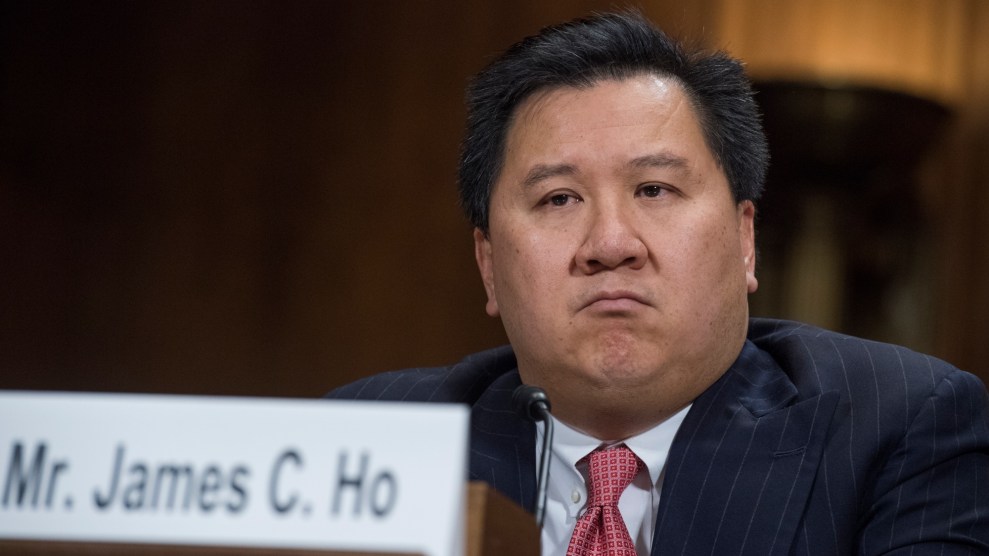 Have you been following what’s going on at Yale? I haven’t, because I’m 35 years old and didn’t go there. But James Ho, a Trump-appointed judge who sits on the Fifth Circuit Court of Appeals, has, and he’s pissed. So pissed, in fact, that he has announced in a speech on Thursday that he will no longer hire any clerks from Yale Law School, and is encouraging other judges to do the same.

According to National Review, which broke the story, Ho was upset about a string of recent events at the university where students disrupted conservative speakers, and another incident last year in which the administration censured a member of the campus chapter of the Federalist Society for inviting classmates to a party at his “trap house.”

“Yale not only tolerates the cancellation of views, it actively practices it,” Ho said in his address. Per NR, his remarks continued:

Ho is mad at the ways in which some students at a private college campus are using their speech to criticize other people’s speech, and so his response is to actually ban anyone from that law school from working in his specific fiefdom of the federal government. It’s a pretty nice illustration of the gulf between what “cancel culture” looks like on television and what it means in practice in 2022.

But I don’t come to criticize Judge Ho, I come to praise him. The highest levels of the federal judiciary have for too long been dominated by graduates of the same handful of select law schools, and it’d be a mistake to say we’re better for it. The illusion of meritocracy they sell has, if anything, helped to sustain the conservative legal movement’s own illusion of balls-and-strikes impartiality and the “originalism” that purportedly guides it—the Supreme Court’s majority bloc has cultivated an aura of exclusivity and scholarly diligence even as it increasingly resembles nothing more than an appendage of the Republican Party.

Yale in particular has been a feeder program and networking pen for the men (mostly) who have done the most to weaponize the legal system for conservative ends. I’m referring to people like Samuel Alito, whose belligerent opinion in Dobbs ended the federal right to abortion by leaning on literally medieval texts, and his colleagues Clarence Thomas and Brett Kavanaugh. Josh Hawley, who led the congressional opposition to certifying the 2020 election results, would not be a senator from Missouri today had he not been a Yale Law School graduate and Supreme Court clerk years ago. I don’t know that Ho is doing this for the soundest reasons, but it’s about time someone recognized Connecticut’s preeminent pedigree-mill for what it is and tried to shut the whole thing down. We could at least try unplugging it and then plugging it back in.