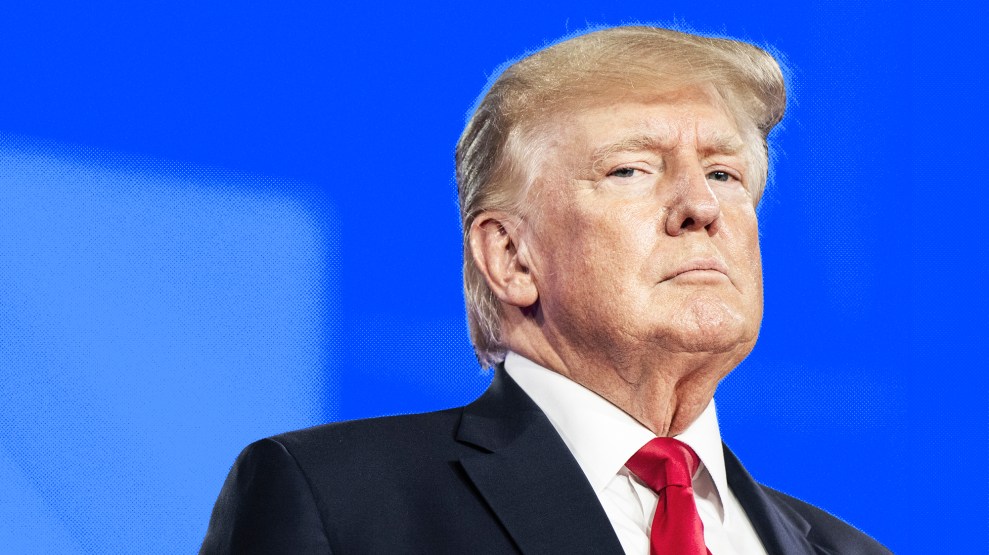 The congressional committee investigating January 6 on Thursday revealed new evidence that Donald Trump had a preexisting plan to falsely declare victory on election night in 2020—part of a plot to use made-up voting fraud claims in an attempt to retain power.

For the second time, the committee played leaked audio first reported by Mother Jones in which Trump adviser Steve Bannon, during an October 31, 2020, meeting, said that Trump had a “strategy” to prematurely assert he had won on Election Day. Explaining the so-called “red mirage,” in which Trump would show early leads in key states before mail-in ballots favoring Joe Biden were counted, Bannon said: “Trump’s going to take advantage of it. That’s our strategy. He’s gonna declare himself a winner.”

On November 1, 2020, before Election Day, Axios first reported Trump’s plan. But Trump denied it at the time. And he and his supporters have since claimed that he was not lying when he announced—just hours after the polls had closed—that he had won. He legitimately believed election fraud cost him victory, they claim.

The committee, however, presented new evidence Thursday that Trump actually knew he had lost—he admitted it to aides—and that his victory declaration was part of plan to rally his supporters to help him stay in office anyway.

“This Big Lie—President Trump’s effort to convince Americans that he had won the 2020 election—began before the election results even came in,” Rep. Zoe Lofgren (D-Calif.) said during Thursday’s hearing. “It was intentional. It was premeditated. It was not based on election results, or any evidence of actual fraud affecting the results, or any actual problems with voting machines. It was a plan concocted in advance, to convince his supporters that he won. And the people who seemingly knew about that plan in advance would ultimately play a significant role in the events of January 6.”

The committee on Thursday played video, shot by a Danish documentarian, in which longtime Trump adviser Roger Stone told Trump supporters on November 1, 2020, that the election would likely remain too close to call on election night. “The key thing to do is to claim victory,” Stone added. “Possession is nine-tenths of the law.”

The committee also revealed a pre-election memo that Tom Fitton, an occasional Trump adviser who runs of the right-wing nonprofit Judicial Watch, emailed to White House aides on October 31, 2020. In it, Fitton proposed victory remarks for Trump. “We had an election today—and I won,” Fitton’s suggested remarks said. Fitton resent the memo on Nov. 3, 2020—Election Day—and said that he had discussed it with Trump.

Thursday’s hearing also included newly aired testimony from Greg Jacob, who was Vice President Mike Pence’s counsel. Jacob said that he learned days before Election Day from Pence’s chief of staff, Marc Short, that Trump planned to prematurely announce that he had won. Short and Jacob reacted by working to distance Pence from Trump’s declaration.

“It is essential that the Vice President not be perceived by the public as having decided questions concerning disputed electoral votes prior to the full development of all relevant facts,” Jacob wrote in a November 3, 2020, memo to Short, which Lofgren said the panel had obtained from the National Archives.

Bannon, Stone, Short, Fitton, and others were all talking around this time about Trump’s plan to falsely declare victory because, it seems clear, Trump had recently informed aides that he was firmly committed to that course of action.

CBS News reporter Robert Costa tweeted Thursday he had seen “texts from that night from some aides” indicating that they realized “declaring victory was Trump’s plan” and that White House lawyers were alarmed.

This is important because it shows that Trump was not simply deluded about the election results. He executed a strategy to lie to Americans about the outcome, to motivate his supporters to help him subvert democracy. The January 6 attack was the culmination of that effort.