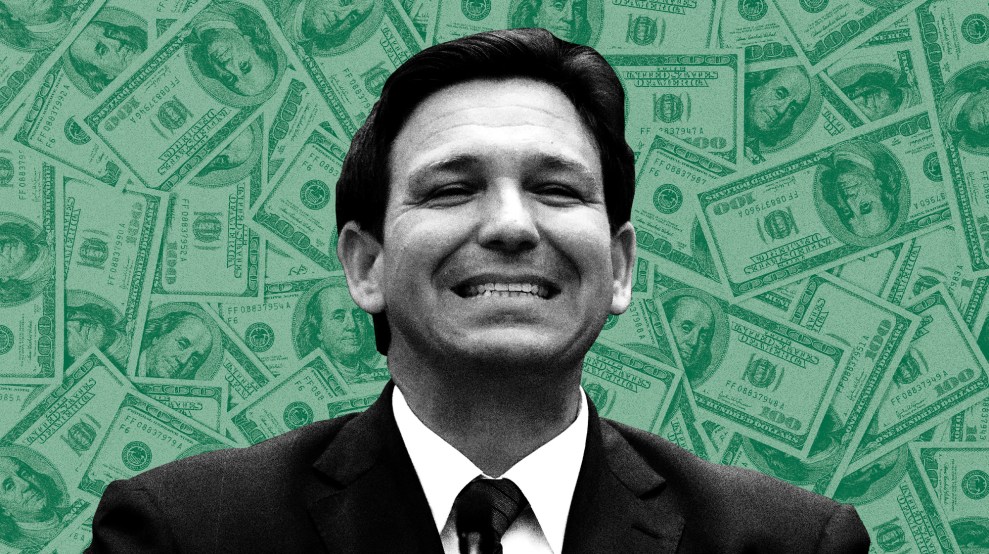 A record $16.3 billion will be spent on 2022 state and federal elections, according to research published Wednesday. The eye-popping figure comes from a new report released by OpenSecrets, a non-partisan group that tracks campaign finance. OpenSecrets estimates at least $9.3 billion will be spent on federal races—a runaway record for a mid-term election year—and at least $7 billion will go toward state-level elections, which would also be a record. Those figures do not include money spent by outside groups, which are harder to track, but which OpenSecrets recently determined had already spent $1.3 billion this cycle—yet another record for the mid-terms, despite the fact that Election Day is still weeks away.

The new analysis shows that, on the state level, Republican and Democratic party committees are remarkably even in their fundraising efforts, with both sides likely to raise about $400 million. But, like at the federal level, individual GOP state candidates appear to have a decided edge in fundraising, outpacing Democratic candidates by about 17 percent for this election—a marked change from 2018, when candidates from both sides raised in the neighborhood of $1.9 billion.

“As with federal races, money flowing into state elections has skyrocketed in recent years—and 2022 ups the ante again. With so many governors up for election this year, gubernatorial races could have enormous consequences in states across the country,” said OpenSecrets executive director Sheila Krumholz.

One major caveat is that the money is not distributed evenly across the board, either on the federal level or the state level. While GOP candidates might have the overall edge, in particular races Democrats may hold enormous advantages, or vice-versa. And of course, not all races will be competitive—a situation in which a huge monetary advantage for one side or the other doesn’t really mean a lot.

The majority of money on the state level is winding up in gubernatorial races—this year there are 36 governorships up for grabs—and GOP candidates have a clear advantage, raising $940 million compared to the $646 million raised by Democratic candidates. However, OpenSecrets researchers cautioned, three particularly expensive races—in Florida, Illinois, and Texas—account for a large portion of that, and much of the GOP advantage is accounted for by the fundraising leads that Ron DeSantis and Greg Abbott have in Florida and Texas. DeSantis alone has raised $187 million and leads his Democratic opponent, Charlie Crist, by about $160 million. Both DeSantis and Abbott have significant leads in most polls over their opponents, as does Illinois incumbent Gov. J.B. Pritzker (D), who has largely financed his own campaign.

Further down the ballot, state races for the offices of attorney general and secretary of state are also hotbeds of activity. According to the OpenSecrets analysis, spending on AG contests is likely to match 2018, when roughly $190 million was spent. On the aggregate, candidates from the two parties have been roughly even in their fundraising totals. But in certain key states, including several where state attorneys general have played roles in election-related litigation, there are enormous disparities; that includes Arizona and Ohio, where GOP AG candidates have spent far more than their Democratic opponents. However, the OpenSecrets research doesn’t distinguish between spending in the primary and general elections, and the GOP candidates in both of these states had to spend heavily to secure the nomination.

Races for secretary of state, typically a sleepy corner of the election, have also garnered unusual attention—and money—in large part due to the pivotal role the job plays in overseeing elections. Candidates have so far raised a record-setting $50 million, and Democrats hold the overall advantage.

Despite having an overall fundraising disadvantage, Democratic campaigns and committees appear to be having more success with small donors—people who give less than $200. On the federal level, according to OpenSecrets, these donors had contributed more than $728 million, through September 30, and Democrats have a 33 percent advantage with this group.