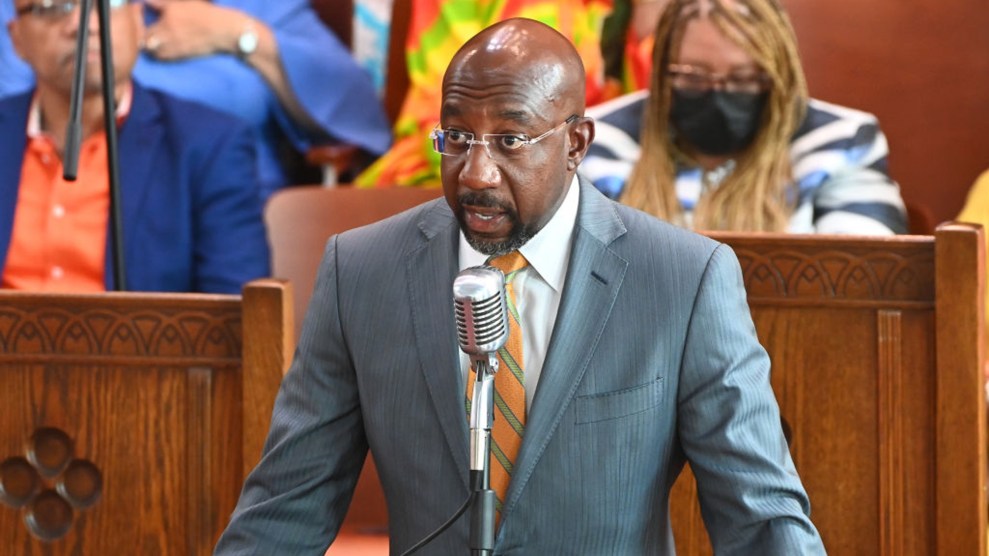 When Sen. Raphael Warnock addressed several dozen supporters at Atlanta’s East Point Avenue United Methodist Church on Wednesday night, what he didn’t say spoke more loudly than what he did.

Warnock’s speech at this outreach event for Latino voters was full of religious and pro-immigration sentiments. “I am a Senator for all Georgia—no matter what country you’re from, and no matter what language you speak,” the reverend said. “The Bible tells us to welcome the stranger.” But it was also surprisingly hospitable to Warnock’s scandal-plagued opponent. That’s because Warnock did not criticize or even mention Herschel Walker once. During his comments, simultaneously interpreted into Spanish, Warnock didn’t bring up that Walker has been accused of holding a gun to his ex-wife’s head. He didn’t mention that Walker has criticized absentee fathers, while also having been accused of being one. Nor did Warnock mention the most recent allegation: that Walker, who supports total abortion bans without exception, has been credibly accused of urging a woman to get an abortion, and paying for the procedure.

Perhaps Warnock has decided that the allegations against the famed 1982 Heisman Trophy Winner are garnering plenty of attention on their own, or that the mud-slinging that has become customary among such high-profile elections is unbecoming of a man who first rose to political prominence as the senior pastor at Atlanta’s Ebeneezer Baptist Church, where Martin Luther King, Jr. once presided.

Asked why he hasn’t commented on the abortion allegations against Walker, outside of once calling them “disturbing,” Warnock told Mother Jones: “I’m focused on the job that the people of Georgia have hired me to do. And I think at the end of the day, the contrast—the deep differences between me and him—will be exceedingly clear.”

But the stakes of his nice-guy gamble couldn’t be higher. National polls averaged by FiveThirtyEight show just a 4-point lead for Warnock in an election that very well may be a factor—or even the final determinant—in whether Democrats retain their narrow control of the Senate. Georgia’s elections decided Senate control in 2020, when Sen. Jon Ossoff and Warnock both won their races in run-offs. Out of 50 states, just Georgia and Louisiana require run-offs when no candidate receives a majority of ballots cast in general elections. Elsewhere, candidates win when they have a plurality of votes. (If Georgia’s election concludes with neither Warnock or Walker winning more than 50 percent of the vote tally because the Libertarian candidate claims even a small percentage of the votes, a second election will take place about a month later.)

Instead of dinging his opponent during his remarks, Warnock went through a laundry list of what he has accomplished in the Senate since being elected in the 2020 special election run-off. Namely, he mentioned his contributions to the Democrats’ recently passed Inflation Reduction Act, such as caps on insulin and prescription drug prices.

“One provision that I wrote caps the costs of prescription drugs for seniors so they don’t have to choose between buying medicine and buying groceries,” Warnock said.

Though he touted legislative victories, Warnock also focused on the work his party has left to do, such as comprehensive immigration reform that “provide[s] for people a reasonable and dignified path to citizenship.”

That focus on real issues over hammering Walker impressed Elliot Lepe, a 34-year-old immigration advocate. “I think it shows he’s a man of class,” Lepe said. “Honestly, if I were in his position, let’s just say I’m glad he’s running for Senate and not me, because I think that it’s fair game.”

The incumbent has to hope some independents and Republicans share Lepe’s opinion. As conservative political radio personality Dana Loesch said recently, many conservatives would vote for Walker whether he “paid to abort endangered baby eagles.” She added: “I want control of the Senate.”

Democratic voter turnout will also be paramount. According to polling released this month by Morning Consult, Republicans are more likely to turn out than their Democrat counterparts by a 5-point margin.

On that note, Warnock again invoked his religious background.

“I often say that a vote is a prayer for the kind of world we desire for ourselves and for our children, so I ask that you would pray with me,” he said, before urging the attendees to vote “the very first week” in which they are eligible.