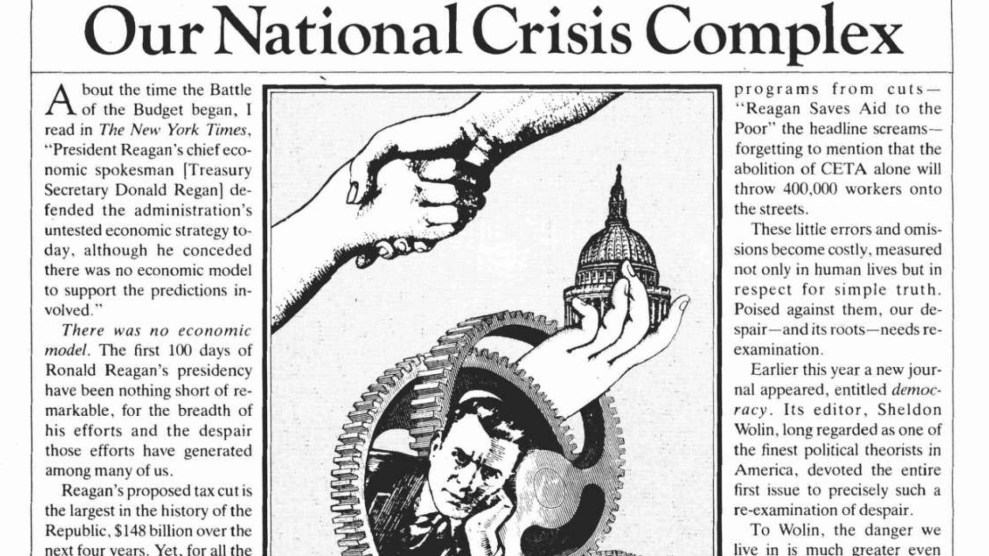 Each week, we take a look at our archives for boosts to propel you into the weekend.

In 1981, the new president, Ronald Reagan, set out to cut taxes. But—as Richard Parker noted in a column from our May 1981 issue—there was a hitch: Treasury Secretary Donald Regan had admitted to the New York Times that “there was no economic model to support the predictions involved.” In the end, Reagan’s adviser was right. The Economic Recovery Tax Act of 1981 passed in August; in 2012, a report (which Republicans attempted to suppress) from the Congressional Research Service found no connection between cutting tax rates during the Reagan era for the wealthy and growth. No economic model to support the predictions.

I went looking for Reagan tax cut news for two reasons. One is this report from the Washington Post about how the first coronavirus stimulus package included a slew of tax cuts. The other is because I’d been listening to Prince’s Controversy (“Ronnie,” he pleads on a track to Ronald Reagan, “talk to Russia”) and a string of Warren Zevon records (the man who said he was “to the right of your father and Ronald Reagan”) and I frankly wondered what the hell was going on in the early ’80s with the left.

Parker’s short piece offers answers for those dislodged by the Reagan era. As he writes, the Reagan administration’s early days were notable for the “breadth of his efforts and the despair those efforts have generated among many of us.” The economy, during this time, was shrunk in technocratic wizardry of semantics to be “only the domain of business-which-produces rather than of we-who-consume.” In the process, talk of real people stunk of the past: “In a world of technique, computers and cost benefits, our generalism seems archaic, a throwback to an earlier, preindustrial age.” Economics meant numbers; progress meant supply-side capitalism; “the president’s chief domestic policy advisor telling us that poverty has almost totally disappeared.”

In this age, the new age, what to do?

Parker laid out, in the essay, a bit of a bizarre theory of personal relationships. He wanted to retake the community aspect of power. But the way he proposed it (value friendships, more dignity and less “self-revelation,” change language) sounds off, at least to my convoluted mind of 2020. Nowadays, we are equally—I would say more so!—made crazy by the disconnect between the world and the world as presented by politicians. (Please see yesterday’s controversy over a green screen message from the president for a basic taste.)

Yet if Parker’s solution is off for 2020, his diagnosis helps guide us through similar times. “We do have power,” he writes, “if we choose to exercise it.”

The point is that institutions are ultimately made by the authority we give them. This is still a personal choice. “Failing to understand that we have power denudes us not only of that power but also of the hope for change that is fundamental to our lives,” he says. “That is the nature of our current despair over Reagan’s ‘economy.'”

Do not give up hope. Life is not all fancy formulas for the economy. Things are, still, basic: You don’t have to know much or any math, really, to know, in the words of Zevon, looking at our one-sided economy, that “shit’s fucked up.”