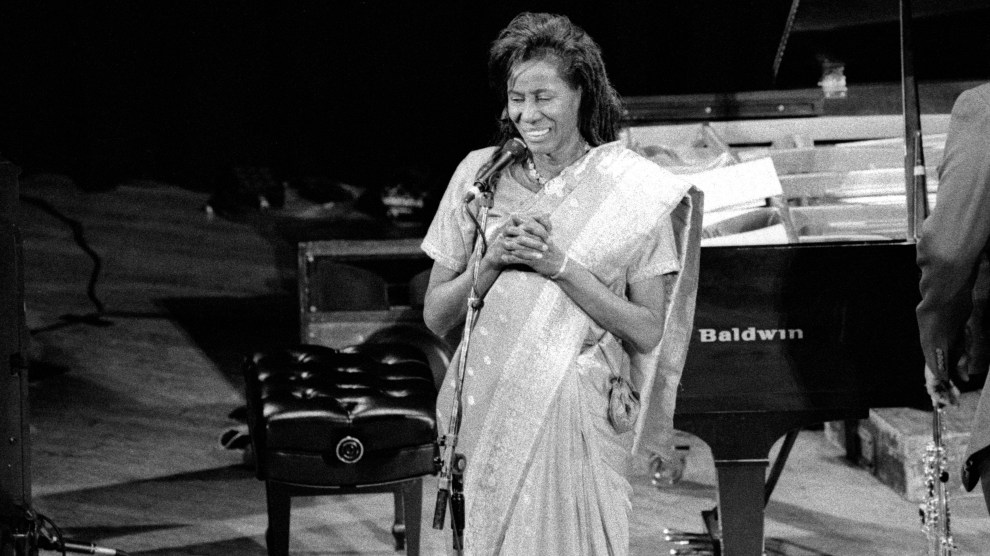 “I remember her coming up in Detroit, where I’m from,” the pianist Geri Allen told me in 2007, one day after Alice Coltrane had made her exit from this world and one year after Allen herself had composed a towering, timeless suite, For the Healing of the Nations.

Coltrane was—much like Allen—a spiritually searching, universally acclaimed pianist and educator “who musicians would refer to at the time: They would speak of Alice McLeod and how much respect they had for her talent. Her technique was fleet and fierce,” Allen said.

Coltrane’s 1981 recordings were newly released this summer, and her impact reverberates across countless chords.

“Being a mother now, I have three children and I saw Alice a number of times with her children,” Allen said. “That had a big impression on me—what she represents,” not just in strides for justice and equality in a field historically framed for and by the reverence and reporting of men in jazz, but also as a pioneer whose impact spans genres, generations, and continents. “I first saw her perform in Europe. It was beautiful watching her daughter Miki make sure she had everything she needed. I saw her in Detroit recently and I needed to connect with her. Ravi and I have played together for years and he graciously took me backstage to meet Alice. She was a spiritual avatar.”

As singer Abbey Lincoln put it to me that year, “Alice Coltrane now…There’s a song I wrote and I want to say a few of the lines: ‘There are some folks I used to know / who used to smile and say hello / and spin the world and turn the page / entertaining from the stage. Father Time forever true / love its own and me and you / disappear just like the sun / when the day is done.'”

Coltrane’s legacy, like Lincoln’s and Allen’s, evokes an aspect of American history summed up in the words of Farah Jasmine Griffin, the jazz educator and author who told me, “We always think of Alice in relationship to John but I think of her in relationship to Dorothy Ashby as well—that whole Detroit-woman harp-player scene. I saw her when she and Ravi were in New Jersey. It was like greeting royalty who’d been in exile. From the moment Alice walked onstage, she could do no wrong. The crowd was a range of devotees: Amina and Amiri Baraka were there, Cornel West.”

“With the exception of Abbey Lincoln, whose audience is always captive, Alice had a palpable love that almost no one else really has.”

As the bassist Reggie Workman said of Alice, “If you listen to the album we did at UCLA, Transfiguration, it’s hard to hear it without hearing the special way she dealt with harmony. She brought strings into an improvisational trance…Alice was a special spirit.”

“I first saw Alice when I was with Dizzy Gillespie,” the saxophonist Yusef Lateef recalled. “We were in southwest Detroit at the Westin Hotel after-hours session, and she would come and sit in. Her brother, Ernie Farrow, worked with me too. Sonny Stitt was there. Barry Harris, Paul Chambers, Hugh Lawson. The object is to find your own voice. And Alice did.”

An essential feature of Coltrane’s framing in the media was distilled vividly by the artist and author Thulani Davis, who told me, “Alice Coltrane is the only person I have ever seen who initially received obituaries that bore the picture of a deceased spouse instead of herself. I suppose that says it all, as far as how this culture was able to perceive her. Alice’s music was sacred music. So the fact that she is seen primarily as John Coltrane’s widow also speaks to the fact that creating sacred music made her somewhat invisible in a culture that does not know what to do with the truly sacred.”

Alice McLeod Coltrane, also known by her Sanskrit name, Turiyasangitananda, was born 84 years ago today. She grew up in an era when Detroit was the epicenter of spiritually expansive jazz and soul. She wove up-tempo arpeggios with cascading, trancelike ragas and a sweeping use of octaves to build layers of color and harmony. But as her contemporaries and listeners point out, to stop there—to isolate her style—is to overlook the underlying reason her sound endures: Through her music, she gave listeners a revealing look into her character as a boundary-pushing spiritualist.

If you want more, email recharge@motherjones.com and I’ll share an excerpt of the podcast I recorded with Alice Coltrane—her last—with Ornette Coleman, McCoy Tyner, and Pharoah Sanders, all in one, in honor of Alice.