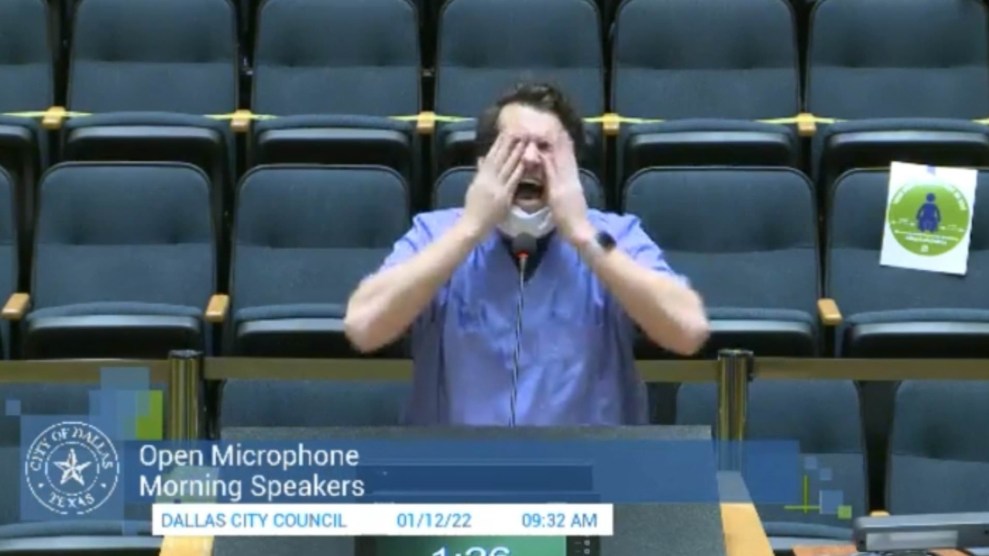 Let’s face it: Everybody’s brain is broken. Spending two years in a pandemic, with no end in sight, has made everyone—on all sides of the political spectrum—act a little…out of pocket. Nowhere is this more true than the public comment portions of City Council meetings, the closest thing to a wildlife refuge for the American weirdo.

At Wednesday’s meeting of the Dallas City Council, the people of Dallas were greeted with perhaps the most perplexing public comment yet: a man dressed in blue surgical scrubs, shouting a pro-vaccination song.

Alex Stein, a YouTube comedian, hit the podium and performed a rap to the tune of Eminem’s “The Real Slim Shady,” with lyrics including “vaccinate me in my thong” and “Dr. Fauci, give me that ouchie.” His audience: some two dozen council members in a largely empty and silent conference room.

This isn’t the first time ordinary people have trolled City Council meetings (nor will it be the last). In December, as it deliberated whether to extend a local Covid emergency order, the San Diego County Board of Supervisors was met with this Santa hat–wearing anti-vaxxer:

A woman identifying herself as Bridget fielded her own (botched) take on Mariah Carey’s record-breaking “All I Want for Christmas Is You”: I don’t want a lot for Christmas, just body autonomy / I don’t care about the variants, because of natural immunity. She promoted ivermectin and hydroxychloroquine, drugs supported by anti-vaxxers, and argued for keeping schools open. (She starts spreading the holiday cheer at 2:03:50).

Or take June 2020, when dozens of upset citizens called in to a public meeting of the Los Angeles Police Department Commission to dunk on the city’s police chief. One viewer, Jeremy Frisch, entered legend with his takedown of LAPD Chief Michel Moore: “I refuse to call you an officer or a chief because you don’t deserve those titles. You are a disgrace. Suck my dick and choke on it. I yield my time. FUCK YOU,” Frisch said. He later told Jezebel he’d practiced his sermon for six hours.

Blessed be public comment for making the mundanity of city governance a little more thrilling.