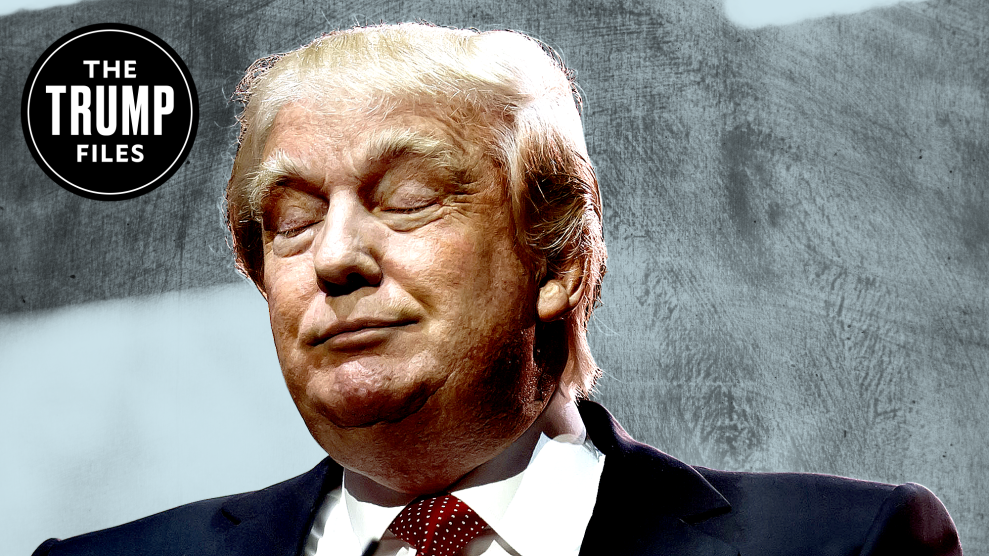 This post was originally published as part of “The Trump Files“—a collection of telling episodes, strange but true stories, and curious scenes from the life of our current president—on October 10, 2016.

If you’ve been following the news about Donald Trump’s charity donations, this is going to come as no surprise: Trump seems to never have followed through on a pledge to donate the profits from sales of his Trump Vodka to charity.

Trump frequently made such pledges while hawking products like “Trump: The Game,” his 2015 campaign book Crippled America, and his infamous Trump University, but there’s no evidence that he ever gave the money he promised to charities. The case of Trump Vodka, however, has an added, poignant twist.

Trump’s older brother, Fred C. Trump, Jr., was an alcoholic who died in 1981 at just 42 years old. Donald has spoken about how his brother’s death deeply affected him. “He had a profound impact on my life, because you never know where you’re going to end up,” he said to People last year. Trump is a famous teetotaler in part because of his brother’s warnings to him about the dangers of alcohol.

So when Trump signed up to promote his own line of vodka (especially to Russian millionaires), he had misgivings. “I sort of hated doing it,” he said in 2005 on his syndicated national radio segment, Trumped!, according to transcripts published by the Wall Street Journal. “I thought about it and what I’ve decided to do is donate any and all money that I make from alcoholic beverages to Mothers Against Drunk Drivers [sic]. I’m going to give 100 percent of that money to them in honor of my late brother, Fred Trump. I guarantee you that Fred is looking down now and saying, ‘That’s really the best thing to do.'”

Except that Mothers Against Drunk Driving doesn’t take donations from alcohol sales, as the group explained to the Huffington Post. In fact, it doesn’t seem he donated the profits to any charity after MADD rebuffed him. “Despite Trump’s promises, there appears to be no record he donated money from Trump Vodka to charity,” HuffPost wrote in June. Trump did, however, sue Drinks Americas, the company that licensed his name, in a New York federal court for $4.8 million dollars (plus interest) he claimed he was owed from the deal. The court dismissed the case, saying it didn’t have jurisdiction.

As for Trump Vodka, the brand started collapsing along with the economy in 2008, according to Bloomberg. Sales declined, Drinks Americas’ credit dried up, Trump Vodka’s distiller went bankrupt, and the booze is no longer sold in the US. But it does live on in Israel, where it’s a dubiously kosher-for-Passover backup option.

Read the rest of “The Trump Files”: