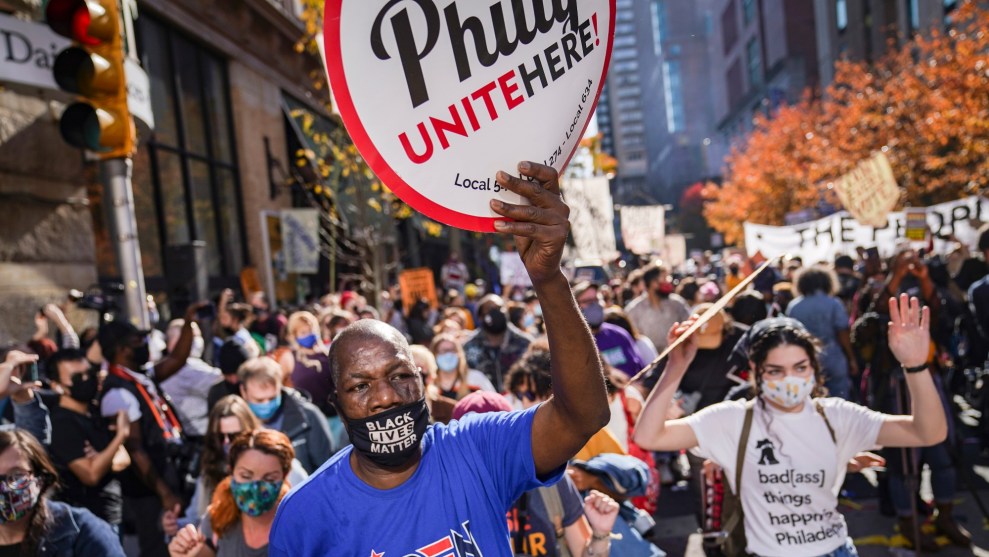 The Philadelphia residents who filled the street outside the Pennsylvania Convention Center on Thursday were already a joyful bunch. The scene was even more merry on Friday, as union workers, musicians, activists, and other protesters cheered the news that Joe Biden had taken a lead in Pennsylvania and Georgia and was within striking distance of victory over Donald Trump.

More than a dozen progressive groups, including Reclaim Philadelphia and the Movement Alliance Project, staged the block party in response to protests from Trump supporters, who grew in number from Thursday but attracted barely any notice from the progressives, who danced and held signs saying, “Count Every Vote.” A line of police officers on bikes kept the two sides separated.

If no journalists were here, the Trump supporters would be getting zero attention. The “Count the Vote” folks seem completely disinterested in engaging with them. (There being a line of bike cops between the two certainly isn’t encouraging engagement either.) pic.twitter.com/Z8HX1TwjSd

With victory in Pennsylvania seeming likely, the “Count Every Vote” crowd seemed more interested in looking ahead to a possible Biden presidency. “Listen, Biden is aggressively fine for this moment in American history,” said Melissa Dunphy, a musician who joined the rally with a sign—featuring Philadelphia Flyers mascot Gritty—that read, “Fuck Around and Find Out.”

“Compared to what we have right now as president, Biden is going to feel like manna from heaven,” she added. “But there is so much more work to do.”

Certainly no one would mistake the “Count Every Vote” contingent with a staunchly pro-Biden crowd. The rally’s highest-profile speakers, including Councilmembers Kendra Brooks and Helen Gym, endorsed Bernie Sanders in the Democratic primary, and another speaker, Sergio Cea of Reclaim Philadelphia, expressly described the rally as “pro-people power and pro-democracy,” not pro-Biden.

“This is NOT a pro Biden rally, this is a pro people power and pro democracy rally” Reclaim leader Sergio @PAStandsUp @formadeluchar #CountEveryVote pic.twitter.com/SueZtu65Xk

Even as the presidential election has occupied virtually everyone’s attention—and thrust Philadelphia into the national spotlight—local injustices remain paramount in the minds of Philadelphians who took to the streets this week. The death of Walter Wallace, a West Philadelphia man who was shot by police officers last month, led to citywide unrest and a mandatory curfew ahead of the election. The release on Wednesday of 911 audio and bodycam footage related to Wallace’s case sparked protests outside City Hall.

Wallace’s funeral, which is scheduled for Saturday, could be another event that draws protesters. Biden’s likely victory was, as Dunphy said, a “first step,” but nowhere close to the last gasp for Philadelphia’s progressive movement.