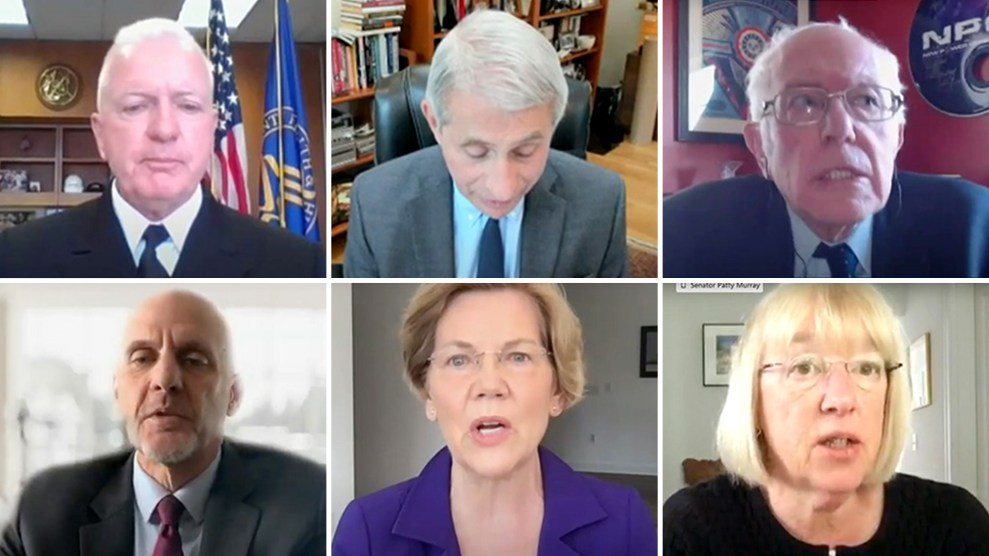 Looking our best during an online work appearance is a real struggle. The public had a rare opportunity on Tuesday to see some of their leaders and top medical officials share that pain, during a Senate hearing into the Trump administration’s coronavirus pandemic response that mixed in-person attendance with video conferencing.

Putting aside the substance for one moment (my colleagues are doing a great job of highlighting the best moments), there were mixed results—ranging from terrifying to broadcast-worthy—in terms of production value. Perhaps their failures and successes can be used to make your next Zoom better.

Fauci’s setup is good. Very on-brand: lots of books; a neat but busy mind. It’s exactly how I imagined (and wanted) his home office to be. But he’s taken the “lift your camera higher” advice too far. Usually this guidance helps lift a subject’s face, smoothing out necklines, and establishing a direct line of eye contact with the viewer. In this case, the camera being too high has a counter-effect, closing Fauci’s face off to the viewer, because he needs to look down to read his notes or cast his eyes to other participants on his screen. The camera angle shows too much floor, and not enough wall.

But overall, his composition is good. Most importantly, he knows how to find his light. He has placed himself in the center, and given himself a nice amount of headroom so he’s not butting the top of the frame. The array of interesting props doesn’t distract from his performance. I’d like him a bit closer to the camera. That could mean bringing his computer closer, because that chair doesn’t look like it will come in any more under the desk. But that’s a quibble.

Anthony Fauci has so much credibility that books get out of bookcases and settle behind him on the floor. The chevron made by the desks produces two streams away but Anthony and the books are central and immovable. He is the tip of the credibility spear and they are his shaft. pic.twitter.com/8LI0Uev6Yz

Bernie’s frame is good. Normally, I’d be worried about this amount of backlight throwing a face into silhouette. But he appears to be countering that with another light source behind the camera, either another window, or a fixed light from his campaign? I like the vermilion wall, which gives character and makes his face pop. But there’s crowding in his wall furnishings. I think it’s good to leave as much room around your head as possible (even though my colleagues were very excited to learn about his Red Hot Chili Peppers fandom).

Don’t think we can’t see the people who spent years angrily insisting that their Bernie fandom is 100% about rigoroous policy analysis gushing over his Red Hot Chili Peppers posters.

Murray is doing a few things to avoid, and a few things to embrace. She’s not in the center, and the top of her head bumps the top of her frame. Also, there is a lot of echo in her room. If that’s happening, it’s because there are a lot of hard surfaces; you can break that up with soft furnishings like cushions, a blanket, a rug, or curtains. That said, her light is good, especially the way it’s catching her hair. A great tip before you hop on camera is do the thing that makes you feel good. If it’s showing off your hair (hard in a pandemic, I know), do that. If it’s your favorite shirt, the one that always gets great comments, wear that. Make yourself feel good. It gives you confidence. So whatever that thing is you do to make yourself feel sharp, do it.

Whoa. He looks like a ghost popping up to say “Boo!” to a small child, sponsored by Shutterstock. To get that kind of shallow depth of field would require a ridiculously low f-stop on a proper camera, and then tons of front-light to combat the extreme back-light. The haziness around the edges indicates it’s almost certainly a fake background. There’s just no way he’s actually pulling off the look he’s faking. Not cool.

In fact, it looks like someone has found the exact background, called “school library or office lobby waiting area for educational business background,” from Getty:

Stephen Hahn is using a Getty stock image as his background during his testimony: https://t.co/OypfcCJGdH

Okay, Brett, look, some real missed opportunities here. The light is great. You look great in that uniform. You’re facing a window. The eye level is spot-on. But the flag composition is wrong, interrupting your head space. Set them further aside so you exist in the middle of the frame without competition. Or place two on each side? Or just no flags? Feature that nice bureaucratic wood paneling without guilt—don’t be shy about that government chic. Also I feel like I’m on a slant, like everything is about to slide starboard, like you’re calling in from a boat. For some reason your connection craps out. Hardwiring your computer to your router can sometimes squeeze out a bit more bandwidth. Do a speed-test beforehand. Make sure your kids aren’t hogging your home system during an important call.

This got quite a bit of criticism from our Slack chatter, but I have to say, he’s got pretty good general composition, placing himself centrally, and has put in some thought and prep. The main problem: His camera needs to be slightly above his eye line; Fauci went too far, Redfield not far enough. Rob, put some more books under your computer. This angle makes it look like you’re about to fall at us. Your background is a too chaotic for my tastes. But good lighting and I love the pop of teal.

His hunting cabin man cave thing is dialed up. Big Energy! That… pelt? But the amazing background here is squandered by lazy composition. He’s (obviously) too close to the camera, and he hasn’t centered himself. If you have a background like this, lean into it! Make it a feature. Show a bit more of it by moving back into the room. As long as your sound is good and clear (and given the amount of soft furnishings and angles that would interrupt echoes, I think Adele would be happy to record something in this room), just let your personality shine.

Total pro. A little more space above the hair would be a bonus. Otherwise, no notes.

Important update, 7 p.m., ET: Lest a competitor in the pandemic video-conferencing wars casually slip into the lexicon unchallenged, like Hoover, or Kleenex, Cisco Public Relations contacted me Tuesday evening with a clarification: the Senate committee was, in fact, using Cisco’s Webex video system, not Zoom, like our headline suggests. “Some have made that error so wanted to be clear,” a spokesperson said. She did, however, concede “those images of the Senators and Dr. Fauci are iconic.”

Correction: An earlier version of this article misidentified today’s day as “Wednesday”. It is Tuesday. (But, honestly, what are “days” anymore?)