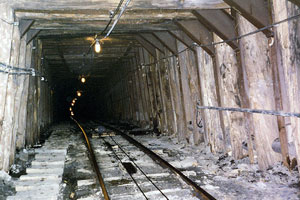 Coal mining is a dangerous business. But it shouldn’t have to be deadly. The explosion that killed at least 25 miners in Montcoal, West Virginia on Monday happened in the Upper Big Branch mine. Federal regulators have fined the mine’s owner, Massey Energy, nearly $400,000 over the past year for “repeated” and “serious” safety violations relating to its plan for venting of toxic methane gas. (“The violations also cover failing to follow the plan, allowing combustible coal dust to pile up, and having improper firefighting equipment,” the Associated Press reported.) A buildup of methane or coal dust—the exact problems the regulators warned about—is the suspected culprit in Monday’s explosion. Meanwhile, as the Washington Independent‘s Aaron Weiner has noted, Massey’s website is citing “another record setting year for safety.”

You would think that repeated warnings about major safety violations would be enough to convince Massey to fix potentially fatal problems in its mine. But the company has a lot of other things on its plate: ignoring environmental regulations, for example. My colleague Andy Kroll mentioned Massey’s environmental record in an article last month:

Between 2000 and 2006, Massey violated the Clean Water Act more than 4,500 times by dumping sediment and leftover mining waste into rivers in Kentucky and West Virginia, the EPA said in 2008. (Environmental groups say the EPA’s tally is a lowball figure; they estimate that the true number of violations is more than 12,000.) As a result of these breaches of the law, the company agreed to pay the EPA a $20 million settlement.

Massey’s CEO, Don Blankenship, is a real piece of work. The country’s highest-paid coal executive, Blankenship is on the board of the US Chamber of Commerce and loves to slam “greeniacs” for believing in things like climate change. He first earned national noteriety in 2004 when he spent some $3 million to defeat Warren McGraw, a liberal incumbent justice on West Virginia’s highest court. Brent Benjamin, who beat McGraw, ruled in favor of Massey in a $50 million breach-of-contract lawsuit. The US Supreme Court later ruled Benjamin should have recused himself from the case. (The battle was so fiercely fought that it inspired a John Grisham novel, The Appeal.)

Rep. Nick Rahall (D-W.Va.), who represents the part of West Virginia where Monday’s accident occured, has said that, “Don Blankenship would actually be less powerful if he were in elected office…. He would be twice as accountable and half as feared.” Rahall’s Republican challenger, Spike Maynard, also used to be on West Virginia’s high court—but lost a reelection fight in 2008 after photos surfaced of him lunching with Blankenship on the French Riviera.

Here you can see Blankenship being a real class act when confronted by a Nightline camera crew:

One more item: You might think that a fatal mine accident of this magnitude would be trouble for Massey. Industry analysts at Jefferies & Company just “reiterated” their “buy” rating on the company’s stock.