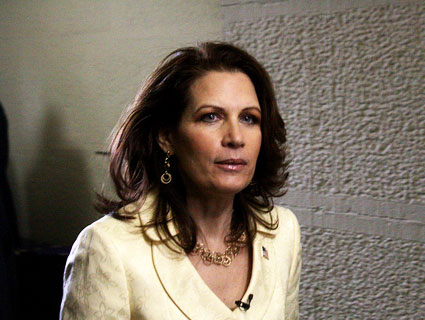 Rep. Michele Bachmann (R-Minn.) thinks the ACLU is in charge of the CIA.<a href="http://www.flickr.com/photos/gageskidmore/5554589051/sizes/z/in/photostream/">Gage Skidmore</a>/Flickr

During Saturday night’s GOP presidential primary debate on CBS, Rep. Michele Bachmann accused President Barack Obama of “allowing the ACLU to run the CIA.” On NBC’s Meet the Press the next day, Bachmann doubled down on the assertion that the Obama administration has been manipulated by diabolical civil libertarian groups:

We all know that that isn’t a long-term solution to this problem. We aren’t adding any new terrorists to Guantanamo Bay. We only have Khalid Sheikh Mohammed, the admitted mastermind of 9/11, who is at Guantanamo Bay, and others as well. But we don’t have a place to put Al Qaeda when we pick them up. It’s either catch and release, which is a terrible idea, or we have to kill them. What we need to win this war on terror is interrogation. This is where my comment about the ACLU comes in because today the CIA is no longer able to go through the interrogation that yielded such profitable information that saved American lives. That’s what I’m interested in, David…The, the, the only thing that we have available to us today is the Army field manual. That’s online. So terrorists can go ahead and read ahead of time what will happen to them when we capture them, and it’s really, effectively, when we capture them today, it’s a slap on the wrist. I want to save American lives, and that’s why I want the CIA…

Host David Gregory pointed out that the United States does in fact continue to detain terrorism suspects in Afghanistan, on aircraft carriers, and in secret foreign facilities, but for some reason he neglected to mention the dozens of domestic maximum and supermax facilities available on American soil, which hold hundreds of convicted terrorists. There are more terrorists serving prison terms in the US than there are detainees at Gitmo.

When Bachmann said that Obama was allowing the ACLU to run the CIA, what she really meant was that she objects to the United States no longer using Communist torture techniques designed to produce false confessions on detainees in American custody. From David Petraeus to former CIA clandestine services officer Glenn Carle to former FBI interrogator Ali Soufan—the list of national-security officials who have criticized the use of torture is long and spans the full range of government entities responsible for dealing with terrorism. When President Ronald Reagan signed the Convention Against Torture, he probably could not have imagined that more than 20 years later opposing torture would be the minority opinion in a GOP presidential debate. The ACLU is in fairly distinguished company in its opposition to torture.

This is not an issue of torture being immoral or not working—even the CIA’s own investigation was inconclusive on whether its interrogation tactics were useful. The effectiveness of international agreements regarding the treatment of people in detention depend on powerful countries like the United States following the rules. If the US ignores these conventions, it is easier for other countries to argue that mistreatment of Americans in their custody doesn’t amount to torture either. The more the United States ignores prohibitions against torture, the more inclined America’s enemies are to feel comfortable doing the same.

Given that the ACLU has spent the last few years suing Obama over accountability for torture, warrantless surveillance, and targeted killing, it’s fair to say if Obama were actually following the ACLU’s lead America’s national security policies would look very different. But perhaps as with her ill-advised remarks on vaccines, Bachmann is just thoughtlessly repeating what’s she’s heard.