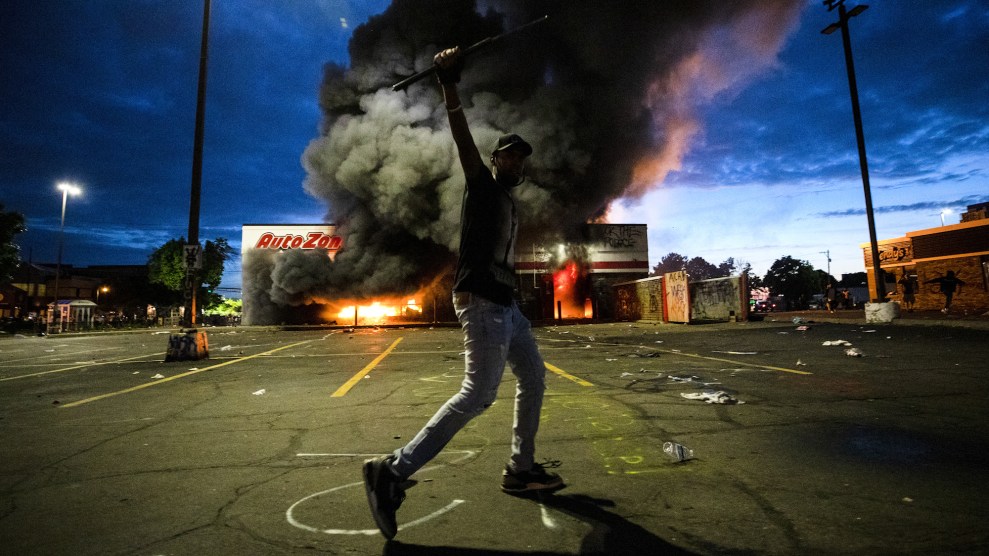 Mayor Jacob Frey begged for peace; President Trump threatened violence. A consensus held fast among liberals and conservatives that peaceful protest was one thing but property damage was beyond the pale—that the rioting could be separated from more acceptable and articulate expressions of grievance.

But that’s the wrong way of thinking about riots, says Joshua Clover, an English professor at UC Davis and author of Riot. Strike. Riot. The riot “cannot be anything but political,” he writes. He envisions riots as an alternative to strikes, which are “production struggles” where laborers fight for better wages and working conditions. In a period of deindustrialization and thinning union density, the fight shifts from the site of the production of goods to the sites of their circulation—from the shop floor of Wisconsin Steel to the aisles of the chain stores where people feel their vulnerability to exploitation most acutely. A riot is a “circulation struggle,” a strike without a workplace. “People fight where they are,” Clover says.

Mother Jones recently spoke to Clover about the history and function of riots. The conversation below has been edited and condensed for clarity.

How would you define a riot?

It does, I think, set itself against a legal order. I understand why people often identify it with violence, but every time the question of violence comes up, I want to point out that the violence always begins not with rioters but with these other forces that are ongoing and then immediate. Longstanding dispossession and grinding imposition of poverty is violence, but then the cops killing George Floyd or Breonna Taylor, or those three people who were cop-adjacent killing Ahmaud Arbery—that’s violence too.

How has the high unemployment we’re seeing as a result of the coronavirus impacted the riots of the last few weeks?

People fight where they are; that’s my great political rule. If you’re in an organized workplace, you’re gonna organize with a labor union and strike. But if that’s not available to you, you’re gonna fight somewhere else. If people who’ve been thrown out of work are gonna gather together to try and transform the world, they’re not gonna do it by organizing their workplace, because it isn’t there.

What role do police play in this theory of riots?

The police oversee commodity. One of their main historical functions is making sure that property stays property. That fact has really different meanings if you’re part of a community whose family has historically been property. We live in the United States where there’s a history of chattel slavery, of making humans the property of other humans, and in that sense, the police, as keepers of property, are always going to be the keepers of a racial order. In that sense, the police role in making sure property stays property is fundamentally anti-Black, fundamentally white supremacist, at the same time that it’s fundamentally in defense of capital.

How do the Minneapolis riots differ from previous riots in response to police brutality, like those in Ferguson in 2014 or in Baltimore in 2015?

I think our social memory is short, and people don’t quite remember the intensity of those riots. A lot of people are saying, “This is historically unique.” The Ferguson riots were very chaotic and intense and happened in two waves, first in Ferguson and then nationally. The Baltimore riots involved nine days of martial law in Maryland, which we haven’t yet seen here. I really want to hold on to and remember the intensity of the ways people struggled at those times.

That said, there are aspects of the present events which are extraordinary and novel. The tradition in the United States has been that when the cops kill a young Black person in ways that really capture people’s political attention, there’s often rioting locally. Then, at some later time, when the cops are found not guilty or they’re not even charged, the rioting goes national. That’s what happened after the beating of Rodney King in 1992. That’s what happened after the murder of Michael Brown in Ferguson in 2014. That’s not the pattern that happened this time. After the killing of George Floyd, the riots started in Minneapolis and spread nationally almost instantly, and that seems like a striking shared national experience of collective struggles that I think is very powerful and something we should pay attention to.

Right, and despite the officers having been charged.

It’s always interesting the question of how much the state is going to sacrifice to try and quell the riots, and clearly this time they’re willing to hang the officers out to dry, which the state is historically very unwilling to do. It gets called “qualified immunity,” but the very set of policies through which police have impunity from any retribution has been a core feature of racial policing in the United States. This time, the police in Minneapolis may face consequences. That would be a sign of how powerful the social struggle has been against the state that it feels necessary to make that sacrifice. I don’t think it’s enough, but it is a useful measure of how frightened the state is right now.

What do you make of the participation in the unrest not just of dispossessed groups, but of people of all races in cities and towns across the US?

It makes sense to me. As I said, this history of policing and of social management is deeply racialized, but it’s not exclusive. For the last couple of years, the increase in incarceration has been in large part driven by white incarceration, especially in very poor counties that suffer from opioid addiction. So, the phenomenon of police domination and incarceration as a strategy of social control really affects a lot of people, although it affects them unevenly. I’m not surprised to see uneven responses, but I’m certainly not surprised to see a lot of solidarity across races and across communities.

A common refrain among people who disapprove of the riots is that people shouldn’t be destroying property in their own communities. How would you respond to that argument?

The idea that people’s community is made of things seems to me like a mistake. Our community is our willingness to care for each other and defend each other and our capacity to do so. Our community is not made of laundry detergent and flatscreen TVs. It’s not made of houses that we don’t own, that our landlord owns. Community and commodity are two very distinct categories, and people willfully confusing them are acting in bad faith. No one’s destroying their own community as far as I know, but people might be responding to their exclusion from the world of things in fairly intense ways. The idea that anyone’s destroying their own community is misleading about what a community is in the first place, especially when you’re talking about people who are fundamentally dispossessed, immiserated, and don’t own very much. No one’s taking their child’s crib out into the street and burning it.

The other thing about people who make that claim is they act as if, “Well, if people only made a rational decision about what they destroyed, I would support it,” as if they would support it if people went to the fancy neighborhood and burned down those houses. But of course people don’t support that either, and that’s how you can tell they’re in bad faith. They’re gonna criticize people and concern-troll people no matter what they do.

What do you foresee being a result of these riots?

Consequences take a long time. It’s surely the case that there will be some gestures toward police reform, as there always is after riots like this. I don’t think they’ll be very effective because I don’t think police can be reformed. The Minneapolis police force announced it would no longer authorize chokeholds or knees to the neck, which I guess some people could count as a victory, but the concession that they’ll be slightly more thoughtful in deciding how to kill Black people doesn’t move me very much.

Ten days ago, there were 330 million Americans who did not know a single thing: They didn’t know that you could sack a police station. And now they know that. They’re slow to know that. This is known around the world. Early in the Egyptian revolution in 2011 there was a night where 99 police stations were burned. So it’s a common historical phenomenon. People recognize the police are the source of their unfreedom, and they fight back against them. And that now appears as a possibility in the United States. That to me seems like an advance, like a gain.