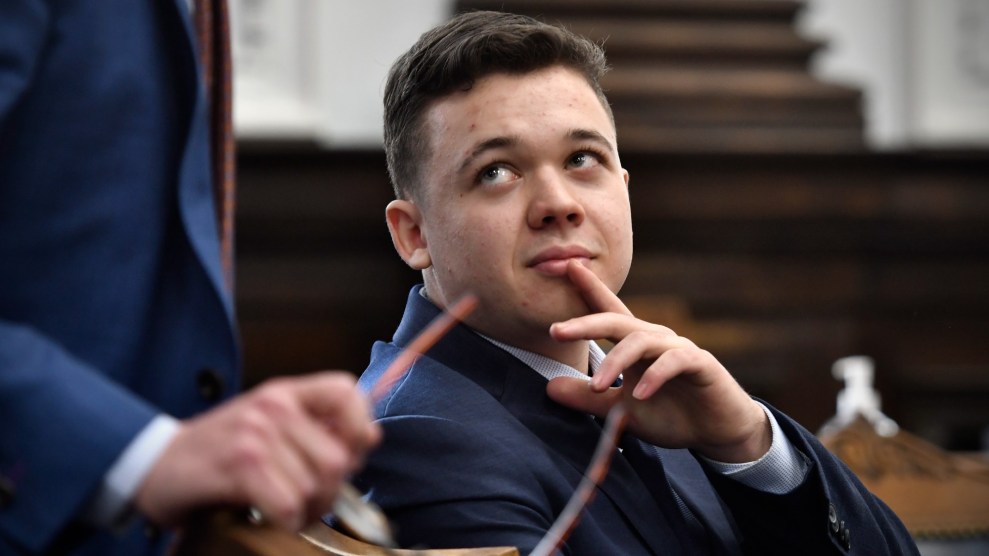 Kyle Rittenhouse was 17 when he killed two Black Lives Matter protesters in Kenosha, Wisconsin, and wounded another. Rittenhouse, who is now 18, has been charged as an adult with five felonies and is accused of crossing state lines and using a gun to kill Anthony Huber and Joseph Rosenbaum, and injure Gaige Grosskreutz. Earlier this month, amid a swarm of controversy, he went on trial in a Kenosha courtroom.

The killings occurred in August 2020, during a series of protests that took place after Rusten Sheskey, a white Kenosha police officer, shot 27-year-old Jacob Blake, a Black man, seven times in the back after a woman called 911 about a domestic incident. Blake was not killed but is now paralyzed from the waist down. Upon hearing about the violence, Rittenhouse left his home in Antioch, Illinois, and then returned there after his actions. When he was charged with the crimes, Rittenhouse quickly became the perfect young, right-wing celebrity for our dystopian times, easily raising $2 million for bail. For many conservatives, Rittenhouse wasn’t a violent vigilante, illegally taking matters into his own hands, but rather a hero defending himself, the besieged businesses of Kenosha, and, of course, white supremacy.

The prosecution has had a tough time in court, which I will get to later. But the unfortunate overarching truth is that the actions of the prosecution hardly seem to matter. Should Rittenhouse be convicted, he becomes a martyr. An acquittal legitimizes what he did, and he becomes a hero. Whatever the jury’s verdict, Kyle Rittenhouse will secure his place as a role model to be emulated.

The killings in Kenosha took place during a period of racial reckoning in the summer of 2020. In February 2020, Ahmaud Arbery, a 25-year-old Black man who was out for a run, was killed by three white men, who assumed he was responsible for a series of burglaries in their community, a small, majority-white neighborhood in Georgia. Coincidentally, at the same time as the Rittenhouse trial is taking place, Gregory McMichael, his son Travis, and their neighbor William Bryan whose actions were videotaped are also standing trial for the murder in Glynn County, Georgia. The video of Arbery’s death went viral in May 2020. Then, after George Floyd was murdered by white police officer Derek Chauvin in Minneapolis, Minnesota, later that month, massive racial justice protests swept the country. Countless instances of police violence appeared leading to even more demonstrations. Two months after Floyd’s death, on August 23, Sheskey shot Blake and sparked a fresh round of demonstrations, this time in Kenosha, some of which turned destructive.

Rittenhouse was arrested the day after the shootings and charged with two counts of intentional homicide, attempted homicide, recklessly endangering the safety of a journalist who was recording the incident, and possessing a weapon as a minor, which is a misdemeanor. Rittenhouse insists he was there to protect businesses and help strangers; his attorneys have argued that Rittenhouse was acting purely in self-defense.

Repeatedly the prosecution appeared to stumble. First, they angered presiding Judge Bruce Schroeder for entering evidence that was already excluded. “You’re telling me that when the judge says, ‘I’m excluding this,’ you just take it upon yourself to put it in ’cause you think that you’ve found a way around it,” Schroeder said. “Come on!”

Things did not improve. Initially, Grosskreutz, a paramedic armed with his own gun who survived being shot by Rittenhouse, described his encounter with him. “I was never trying to kill the defendant,” Grosskreutz said. “In that moment, I was trying to preserve my own life, but doing so while taking the life of another is not something I am capable or comfortable doing.” That seemed to be what the prosecution had hoped for.

But during cross-examination, Grosskreutz said he pointed his gun at Rittenhouse before he was shot, and that he had lied to investigators when he said his gun had fallen out of his pants earlier in the night. These admissions bolstered the claim that Rittenhouse was acting in self-defense. “So when you were standing three to five feet from him with your arms up in the air, he never fired, right?” Corey Chirafisi, one of Rittenhouse’s lawyers asked. Grosskreutz confirmed with a simple, “Correct.” As evidence of at least the right-wing take on his testimony, Fox News trumpeted: “Defense hit it out of the ballpark with Gaige Grosskreutz testimony, experts say.”

Rittenhouse, who also testified, recounted the fatal night in Kenosha, breaking into a sob at one point. “I didn’t intend to kill them. I intended to stop the people who were attacking me,” he said. “I did what I had to do to stop the person who was attacking me.” Whether or not you believe they were genuine tears, Rittenhouse’s raw emotions on the stand offered still more ammunition for right-wing fans. J.D. Vance, who is a Yale alum, author of Hillbilly Elegy, and running for US Senate in Ohio, launched a hysterical and thinly veiled anti-Semitic brief tweet thread. It’s a vivid foreshadowing of how conservatives will react if Rittenhouse is convicted.

We leave our boys without fathers. We let the wolves set fire to their communities. And when human nature tells them to go and defend what no one else is defending, we bring the full weight of the state and the global monopolists against them.

In Vance’s version, Kyle Rittenhouse isn’t a vigilante who took a gun to shoot protesters, he’s a scared boy who was doing what the police failed to do. “I didn’t do anything wrong,” the defendant testified. “I defended myself.” If the jury decides that Rittenhouse indeed is that scared, vulnerable boy, and that white people may act out their violent fantasies so long as they can claim they are simply “defending themselves” white vigilantism becomes further legitimized and more deeply entrenched.

But let’s say Rittenhouse is acquitted. That’s easy. The message to 17-year-olds with an attitude and a gun is that crossing state lines to attack racial justice protesters is the right thing to do. (Even not crossing state lines.) The country already has an outsized problem with vigilante “justice” and an acquittal will only embolden those who are so inclined. On the other hand, a conviction likely would end the same way.

Despite the heightened awareness around white supremacy and violence, recent evidence proves that a conviction would not magically transform the opinion of the vocal minority. After three weeks in court, Minneapolis police officer Derek Chauvin was found guilty by a jury of his peers. But his conviction only fueled the whitelash. Conservatives doubled down in their support of law enforcement blaming rising homicide rates on the protests in 2020, or the alleged  “defunding” of police, and refusing to engage in even modest reforms of policing.

Convicting Rittenhouse would just add to the tired old narrative that white conservatives are persecuted. I can already see the incoherent Donald Trump statement in my Twitter feed and working-class cosplayer Tucker Carlson frothing at the mouth during his nightly Fox News show. Never mind the viewpoint of the victims’ loved ones. After all, if you can’t shoot protesters in the name of “protecting” businesses from violent Black people and their allies, who can you legitimately shoot?

In the end, this is what America is. It’s not a matter of if there will be more political violence and more protests, but when. After the trial, somewhere out there, the next Kyle Rittenhouse will be waiting for his chance to kill and claim self-defense. The script is already written.