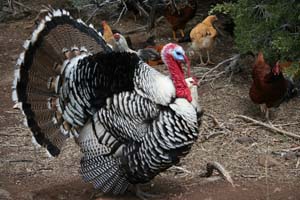 I never manage much sleep the night before the roundup.

By the time butchering day rolls around in early November, I’ve spent more than six months nurturing my flock of heritage turkeys from day-old poults into full-size roasters. This spring I hatched eggs from my breeding stock of three hens (and a tom) that I kept over from last season’s flock. I know my turkeys are destined for the Thanksgiving table, yet it’s hard for me to remain completely detached.

Turkeys are social creatures, and each year they come to treat me as one of their flock. In the evening when I make my special clucking sound to signal dinnertime, they follow me into the barn as if I were the Pied Piper.

I do my best to give them full and healthy lives. By day, they have free run of a three-acre fenced orchard with an irrigation ditch flowing through, and while they’re fully capable of flying over the fence or taking off on their own, they choose to stay. Apparently, life is pretty good on our farm. So good that this past spring three wild turkey hens came by for a conjugal visit with our year-old tom. One of the hens felt enough at home that she followed the others into our predator-resistant barn and spent the night roosting beside her domestic brethren until I chased her away the next morning.

This year’s butchering day fell on a cloudy, cold morning. My husband Dave and I rose at dawn with long faces. We dread the inevitable chaos that ensues when 50 turkeys shut in a confined area realize we’re out to catch them. The first one is easy to nab, but once we place him in a transport crate, the others panic.

As hard as we try to accomplish the roundup without stressing our birds, we rarely fully succeed. They don’t understand where they’re headed, but they do know something’s amiss, and they’re scared. I’m stressed, too. We use a long hook to snag their legs so we can grasp their feet and lift them into the crates. And while we take great care not to hurt them, it pains me to have to wrangle them like this.

I recently learned that researchers are looking at the possibility of genetically engineering livestock to lack the capacity for pain. At first glance, it kind of sounds like a good idea. If my birds went calmly and willingly to the slaughter, butchering day would be far less stressful for all.

Or would it? As I drove this year’s turkeys to our butcher, I thought about the first turkey we ever raised. When Thanksgiving came that year, Dave picked up our tom without a fight. As he walked it over to the butchering block on the far side of our shed, I was struck by how calm and unknowing the turkey seemed. He trusted us, and our violation of that trust made me more uneasy than any struggle I’ve since experienced trying to load our turkeys into crates. That first tom stayed eerily serene up until the moment we spun him around and placed his head on the block. And in an instant—before he could know what was happening—his head was off. As I held his convulsing body up by the feet, I felt heartless and sad for killing such an unsuspecting creature.

I need to know the birds can resist. Somehow it feels fairer, more like the normal predator-prey relationships I’ve witnessed so many times as a poultry farmer. This year, I lost a couple of chickens to a fox and one to a Cooper’s hawk. Others got away, saved by their natural fear instincts. I’d be fooling myself to think raising poultry is sporting, or that my turkeys and chickens have a chance against the butcher’s blade. Yet it feels wrong to remove their fighting instinct. When my turkeys resist my efforts to corral them, I know they’re fully alive. I don’t want them to suffer, of course, but I don’t want them numbed, either. Without pain—and thus fear—I’d have no way to gauge whether I’m treating them humanely.

The fact is, eating meat means an animal must die, and factory farms and slaughterhouses have already done more than enough to turn life into a cheap commodity. Removing the animals’ capacity for normal behavior would quite simply remove the soul from our food. Indeed, I have never cherished a meal like I did that first Thanksgiving turkey. I knew that tom well, and I was grateful for his unwitting sacrifice.

Now that I sell the turkeys I raise, I use a certified butcher, and this year I took a look around the processing facility when I brought the turkeys. A USDA inspector stood watch in a white lab coat as a crew of workers in plastic aprons went about their work. I took special note of the techniques employed by a man who wielded a long knife to slash birds’ throats with one broad stroke. He saw me watching, and looked up. “I just don’t want them to suffer,” I explained.

“Oh no ma’am, I make sure,” he said. “We just had an inspection from the Humane Society a few days ago and they said we are the most humane facility they’ve seen.” Welcome information, but it didn’t change the fact that I was going to miss them. The man with the knife started to say something else, but I had already turned my back. I got into the truck and drove away before he could see the tears streaming down my face.