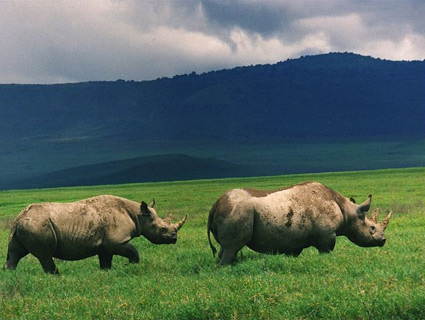 Two black rhinos walk through the Ngorongoro Crater in Tanzania. Courtesy of <a href=http://en.wikipedia.org/wiki/File:Black_rhinos_in_crater.jpg>Wikimedia Commons</a>

The scene of a rhino crime
On a grassy expanse somewhere in South Africa’s Kariega Game Reserve in March, a male rhinoceros struggled to its feet, hobbled several paces, and then thudded back down under its own weight. The beast’s iconic horn had been macheted off by poachers, and all that remained was a mound of raw, mutilated flesh. Not too far off, the carnage was even worse. Sprawled beside a bush, a female rhino heaved for air on a patch of grass damp with her own blood. “I just thought surely we can’t save this one,” says wildlife veterinarian Dr. William Fowlds in the footage below, as he examines the bull’s injuries and tends to the aftermath.

After making surprising steps toward recovery, the male rhino, Themba, drowned in a watering hole. Miraculously, the female, Thandi, fought against the odds and successfully survived her brutal skull hacking: 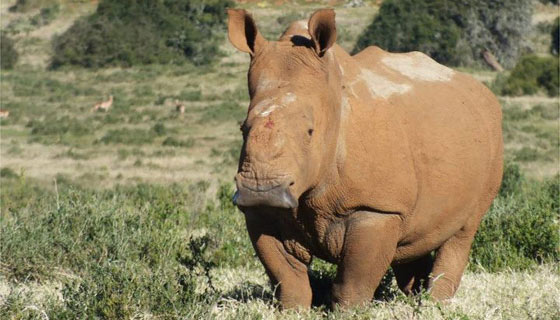 Wait, this is just an isolated incident, right?
Since the 1970s, rhino populations have declined by more than 90 percent. Due to increased law enforcement and conservation efforts, poaching in South Africa began to slow during the early 90s and through most of the next decade, with killings consistently in the single or low double digits. In 2008, however, a resurgence occurred. The number of poachings skyrocketed from 13 in 2007 to 83 in 2008. In 2010, the number shot up to 333. And then, last year, it hit a high of 448. The latest numbers (281) suggest that 2012 will edge out 2011. “Poaching levels are unsustainable,” says John Scanlon, the secretary-general of the Convention on International Trade in Endangered Species of Wild Fauna and Flora (CITES), in a recent documentary that premiered at the United Nations’ Rio+20 conference. “This species will be driven to extinction in the wild if these trends continue.” South Africa, which is home to 90 percent of the world’s rhino population, hosts two species, the black rhino and the white rhino. The black rhino is listed as critically endangered while the white rhino is listed as near-threatened (though its northern subspecies is also critically endangered.)

Why the recent uptick in rhino poachings?
For thousands of years, rhino horn has been prized as an elixir by practitioners of traditional Chinese medicine. A few years ago, though, rumors swirled that a high-ranking official in Vietnam had been cured of cancer after ingesting the remedy, which is made from horns ground against bowls and then dissolved in water. Some say this gossip is what has led to the recent soaring demand in Asia. On the Vietnamese black market, dealers are hustling a gram of the stuff for anywhere between $40 to $140, according to CITES. At the top end, it’s more valuable than cocaine and almost triple the price of gold. The only problem is that it’s all bogus. Rhino horn is composed entirely of keratin, the same protein found in human fingernails and hair. “There is no evidence at all that any constituent of rhino horn has any medical property,” Dr. Raj Amin at the Zoological Society of London told PBS. “Medically, it’s the same as actually chewing your own nails.”

How do the poachers operate?
According to CITES, poachers are employing increasingly sophisticated methods, including helicopter flights to locate the animals among massive swaths of land and night vision equipment. Armed to the teeth with silencers, crossbows, pistols, AK47s, and hand grenades, poachers rove in bands of five or six men and are willing to kill to escape and pass their profitable loot along to middlemen. South African soldiers and field rangers are already putting their lives on the line to stop them. Dr. David Mabunda, the chief executive of South Africa’s national conservation agency, SANParks, recently said the violence has ratcheted up to the point where it “can rightfully be called a low intensity war.” For a short cinematic breakdown of everything from horn removal to consumer purchases in Asia, check out what Tom Milliken, a rhino horn trade expert, told NBC:

What is the most effective method of thwarting this sh*t storm?
University of Montana wildlife biologist Joel Berger, an expert in hoofed animals, spent three years in Africa closely evaluating the practice of removing rhino horn safely down to the base as a conservation strategy. “The idea being, of course: no horns, then no incentive to poach,” Berger told Mother Jones. But 90 percent of the dehorned white rhinos that his PhD student tracked in Zimbabwe were still targeted and killed by the poachers for their nubs. What’s more, the dehorned mama black rhinos that he studied himself in Namibia were unable to protect their calves from pesky hyenas.

Berger advocates funneling more funding into armed guards and the fortification of game reserves. “That’s the only thing that has really been effective for reversing the climbing trend,” says Berger.

Well, at least the rhino horn trade is one evil thing Americans aren’t participating in.
Think again. The Deputy Chief of Law Enforcement for the US Fish and Wildlife Service (USFWS), Edward Grace, is calling the US rhino trade his “number one priority.” Grace told Mother Jones that the eight arrests his agency has made on US soil thus far in 2012 are “just the start of” a widespread crackdown. When asked for an estimate of current investigations, Grace declined to comment, reiterating that the investigation was ongoing. But he did say the agency has served search warrants and conducted interviews related to the investigation, dubbed “Operation Crash” after the term for a rhino herd, in more than 25 states.

When did USFWS get on the trail of the rhino horn trade?
Two years ago, a buy-bust operation in Colorado ensnared two interested Irish nationals, according to Grace. The pair offered undercover agents $17,000 for four black rhino horns, according to the Irish Examiner. They were known members of the Rathkeale Rovers, an organized crime syndicate from Rathkeale, County Limerick, that has become notorious for its multi-million dollar rhino horn smuggling operation and other scams. The organized crime connection, as well as the recent uptick in poaching in Africa, raised enough red flags to assign the special investigations unit. “Any time that we know that there’s a syndicate or organized crime involved in a wildlife trading,” Grace says, “that then becomes one of our priorities because they’ll have the resources to be able to really deal in these wildlife products.”

When Grace conducted sting operations six or seven years ago in the US, he bought a horn from a South African for $10,000. But now, he says, they’re selling anywhere from $5,000 to $10,000 a pound, meaning one horn could go for $80,000 or more. Criminals have taken notice of the skyrocketing demand and tried to carve out a niche in the high-profit, low-risk trade. “If you get caught, you may go to jail for a couple of years,” Grace says, “but it’s not like going to jail if you get caught with a kilo of heroin or cocaine, where you could be looking at 10 or 25 years.”

Who else has been busted?
The USFWS has taken down quite a colorful assortment of bandits beyond just Irish gangsters and, as Grace says, there will be more. Back in February, they arrested a Chinese national, Jin Zhao Feng, who had coordinated dozens of rhino horn shipments to his home country, after he got off a plane at LAX. The agency also nabbed some of Feng’s suppliers: ex-professional rodeo cowboy Wade Steffen, father-and-son team Jimmy and Felix Kha, and Mai Nguyen, the owner of a nail shop that was receiving horn shipments. Steffen had been stopped at Long Beach Airport earlier in February, where a search of his luggage turned up $337,000 in cash, some of it stuffed in a diaper bag. In later searches, USFWS and ICE officials discovered 17 packages with 37 rhino horns, $1 million in gold ingots, diamonds, Rolex watches, and another $1 million in cash.

Last month, 67-year-old New York antiques expert David Hausman, who was picked up at around the same time, plead guilty to obstructing justice for posing as an informant to USFWS while covertly purchasing horns himself. In both cases, the horns discovered were sourced from the critically endangered black rhino, though many of them likely came from old trophy mounts sold in auction houses and antique shops.

At the end of the day, Grace hopes that choking off part of the black market here will do something to halt the brutal poaching back in Africa. “There’s no reason a majestic species like that should end up going extinct because of a myth,” he says.