ON A CLOUDY spring morning, Ethan Ritter sat behind the wheel of a dump truck, lost in the maze of oil rigs northeast of Williston, North Dakota. Ritter, then 21, was hauling a load of gravel for his brother, who was doing road construction. He made a full stop at the tracks; there were no boom gates, only a crossing sign. His CB radio was off and all was quiet. Ritter looked both ways, then eased on the gas and headed into the crossing.

Next thing he knew, a Burlington Northern Santa Fe engine was shoving his truck down the track sideways at more than 40 miles an hour. “It was crazier than any roller coaster you can find, I’ll tell you that!” he recalls. “All I know is I got hit by the train. And that I was still kicking.”

In the past four years the intersection—the only access point to a handful of oil wells—has seen four train-truck accidents, one of them fatal. Nationwide, collisions of trains and motor vehicles have dropped by 32 percent since 2006, but in North Dakota they’re up 67 percent.

Fracking relies on trucks. In its lifetime, a single well requires some 1,500 trips by semis, tankers, and pickups—oil out; water, sand, and chemicals in. This is especially true in places like the Bakken Shale, where pipelines are scarce. On Williston’s crumbling roads, mud-caked semis jostle for space like massive bumper cars. Rush-hour backups can stretch for miles. 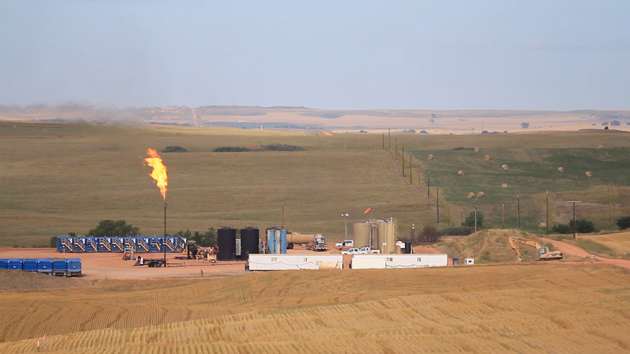 Oil rigs like this one pepper the landscape outside Williston, North Dakota. James West/Climate Desk

Vehicle accidents are the top danger to oil and gas workers, who are killed on the job at a rate nearly eight times the national average, according to the National Institute for Occupational Safety and Health. As the number of rigs increases, fatalities increase in tandem. NIOSH researcher Ryan Hill cites a lethal combination of factors: thousands of young, inexperienced workers; a glut of new, often mom-and-pop contractors; and out-of-date oil rigs being brought back online.

Job growth in the oil and gas industry has tripled since 2007, according to data from the North Dakota Petroleum Council (NDPC). But workers’ compensation claims have soared almost sixfold among the state’s oil and gas truckers and have more than quadrupled among its gas and oil workers as a whole.

Those figures only account for the people who actually file workers’ comp claims. Many injured workers are encouraged not to. Lawyer Dan Fleck, whose Wyoming firm has represented thousands of injured oil workers in its 60 years, says companies often create a “culture of safety” by offering rewards for low injury rates. “There became a huge push to not report so people can get their stupid jean jackets,” Fleck says. “Those are ways of manipulating injury rates in a way that’s really disingenuous.” The result, especially in states like North Dakota, where companies are allowed to compensate workers directly for their injuries: “It’s the Wild Fucking West out there right now.”

Three years before his encounter with the train, Ethan Ritter crushed two vertebrae working at a gas plant. A coworker told him to “quit being a pussy,” but doctors ordered him to stop working, so he did. His employer quietly covered his salary for a year. “When you report something up here to workman’s comp,” Ritter says, “there’s a lot of companies that look at your accident record, and if you have X amount of accidents they’re not gonna let your company work for them.” 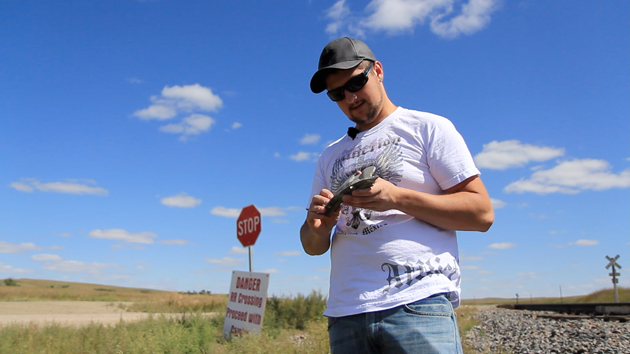 When Ethan Ritter injured his back on an oil rig, a coworker told him to “quit being a pussy.” James West/Climate DeskThat’s a common story, says Dr. Leszek Jaszczak, director of a medical clinic in Williston. “There’s always a push by the company to take care of the workers on one hand, but if something can be cleaned up and patched up, then that’s fine,” he says, referring to minor injuries. “If we can not report something, we don’t.”

Peg Seminario, safety chief for the AFL-CIO, says underreporting warps national safety figures in an industry that’s already notoriously opaque. For all the attention to fracking’s environmental impact, she says, “there hasn’t been sufficient attention paid to workers’ safety.”

Companies in the Bakken says worker protection is a top priority. Workers’ comp premiums dropped a bit last year (pdf), “an indicator that safety incidences and associated claims were lower than anticipated,” a spokeswoman for the NDPC told us in a written statement. “The industry takes the safety of its employees to be of the utmost importance and has created and maintained a very robust safety culture.”

Yet even if companies manage to stanch the rate of injuries, there’s another menace lurking down the road: Each well requires up to 2,000 tons of sand for its cement casing and for the fracking process itself. But this isn’t the stuff you play in at the beach: Fracking sand contains fine silica, which can penetrate deep into workers’ lungs. In May, NIOSH reported that 92 of 116 air samples it had taken from fracking sites in five states exceeded the recommended safe levels for silica. Too much exposure over a career may result in a grim prognosis: Silicosis is an incurable, irreversible lung disease that can lead to lung cancer and make people more susceptible to tuberculosis. “If you’ve got something that’s an insidious disease, those are very hard to do surveillance for,” says NIOSH chemical exposure expert Eric Esswein. “I couldn’t even project what’s going to happen with silicosis.”

Back at the railroad crossing, Ritter stoops to pick up one of the bits of truck scattered on the ground. “Maybe I’ll find my wallet out here,” he says. “Never found that.” A Williston native, he remembers snowmobiling on the hills nearby, which used to be grassy meadows in the summertime. Now the landscape is stripped to the bone as far as the eye can see. The boom “needs to slow down a little bit,” he says. “But then again, it can’t.”