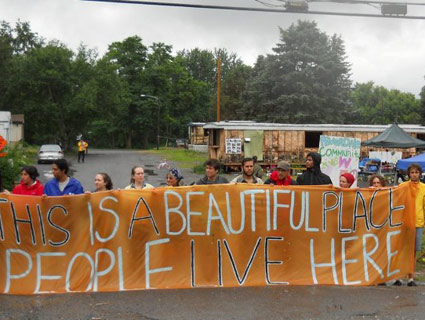 When the 32 families of the Riverdale Mobile Home Park in Jersey Shore, Pennsylvania, found out that they were losing their homes to the state’s latest fracking operation, the news didn’t come from their landlord, or an eviction notice in the mail—they read about it in their morning paper.

The February 18 article, published in the Williamsport Sun-Gazette, nonchalantly detailed the approval of three natural gas projects in Lycoming County, PA, including a water withdrawal station that would pipe millions of gallons of water from the Susquehanna River to fracking stations in the mountains further north. The article noted that an “added benefit” of the plans was “the removal of mobile homes,” which were located in a potential flood plain.

Later that afternoon, Riverdale’s landlord came by and confirmed what residents had already read in the paper: The property had been sold to Aqua America, a water company dedicated to fracking. The full magnitude of the blow came days later, when the eviction notices arrived, informing the residents that they had until May 1 to relocate so that work on the site could begin in June. Each family was offered $2,500 if they got off the property by April 1; $1,500 if they moved by May 1; and zero compensation after that. It wasn’t nearly enough; lawyers for Riverdale residents later estimated that the cost of moving each trailer was, on average, between $8,000 to $10,000.

For communities on the Rust Belt, it’s one of the oldest stories in the book: A new industry comes in and needs to build roadways or pipelines, and poor communities have to get out of its way. “This happens all the time in Pennsylvania,” said Alex Lotorto, a Pennsylvania activist and delegate for the union group Industrial Workers of the World. “Industry comes in and uses our skilled labor. Then both government and industry end up abusing us because honestly, nobody even thinks about the people north of I-80.”

But in Riverdale, something unexpected happened: People decided they weren’t going to go quietly.

It started with a single post in the comments section of the Sun-Gazette, when Riverdale resident Kevin June posted his contact information and a plea for outside help. “I live in this park and pray everyday that God will give some of us an answer,” he wrote. “Would everyone that reads this contact all the news media so the ones that have no where to go or the money to move or that there homes are to old to move into another park can have some answers as to what we do next.”

Lotorto was one of the first to respond. For months, he worked with Riverdale residents to lawyer up in order to fight the eviction and to pressure Aqua America into negotiations.

But by the end of May, with several families still on site who had been unwilling or physically and financially unable to move, Riverdale was running low on options. With construction due to begin June 1, Riverdale residents, volunteers, and activists took a final stand: They built a blockade and said they wouldn’t move until they were forced to.

The blockade lasted almost two weeks. Activists from Occupy Cleveland arrived on the scene on June 4, driving across the state line to respond to Riverdale’s open call for volunteers to help them hold the site. Volunteers began coming, and a modest flow of monetary donations trickled in. On June 11, Riverdale sent out an emergency call after being told by a utility worker that Aqua America’s construction crew would arrive to begin excavations the following day.

But at noon on June 12, a private security company contracted by Aqua America arrived on the scene and began dismantling the blockade (watch a video here.) Nonresident protesters were told to leave or risk arrest for trespassing. When some resisted, the Pennsylvania State Police were called to the scene. Riverdale residents stepped in before any arrests were made, requesting that all volunteers leave in compliance with the police.

“There are three private security guards at all times and floodlights on the place all night. They can’t get their mail; the mailman isn’t allowed in there. They can’t get anyone to come help them move their things. It’s like they’re incarcerated.”

Over the past 10 days, construction has begun on the former trailer park. Seven families remain on the premises and are in negotiations with Aqua America for financial compensation.

Lotorto noted that they are also banned from having guests, a measure originally meant to prevent additional barricades and protesters that may have gotten out of hand. “There are three private security guards at all times and floodlights on the place all night,” he said. “They can’t get their mail; the mailman isn’t allowed in there. They can’t get anyone to come help them move their things. It’s like they’re incarcerated.”

But former Riverdale resident Eric Daniels, a truck driver in the natural gas industry, wants everyone in the country to know this: “We were a small group of people who stood up against this injustice.”

And it looks like Riverdale won’t be the last Pennsylvania community that gets fracked. Just yesterday, residents of nearby Bucknell View Mobile Home Park received notice that they would have to pay thousands of dollars to raise their trailers to higher ground—or get out by August 1. “The issues in our area are out of control,” Daniels said.

Nor are community fights over fracking damages by any means isolated to the Susquehanna area. In upstate New York, five underserved counties are about to get fracked, and communities are split between their need for income and their fears of water contamination and other health risks. In California, 600 unregulated wells were fracked in 2011, and upset citizens have allied with national environmental nonprofits to coordinate protests.

“Fracking is always going to have to be fought largely at the local and state level because that’s where the controlling government jurisdictions mostly are,” said environmental activist and author Bill McKibben, whose organization 350.org used its clout to pass Riverdale’s call to action on to its regional supporters via Twitter and email. “It makes it hard, but powerful.”