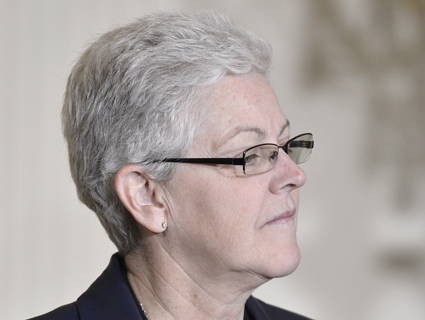 Earlier this month, when a burst pipe spilled thousands of gallons of heavy oil into an Arkansas suburb, the message from the White House went something like: “Everybody chill, the EPA has it under control.” But reporters on the scene found the cleanup orchestrated by the same company, ExxonMobil, that allowed the spill, and heard only crickets when they asked the EPA about its involvement.

Turns out, on some of the nation’s most pressing environmental health issues, the EPA’s transparency record isn’t exactly crystal-clear.

So with a vote on President Obama’s new pick to head the EPA, Gina McCarthy, coming up as soon as next week, it perhaps isn’t a surprise that Congressional scrutiny of her nomination has centered more on the agency’s secret-keeping habits than on its environmental enforcement goals. At a hearing last Thursday before the Senate’s Environment and Public Works Committee, McCarthy got grilled on EPA’s transparency record by Republican members, led by Louisiana’s David Vitter. On Tuesday, the committee’s Republicans sent a memo demanding details on her plans to open up the agency’s inner workings.

But for all their zeal, Vitter and his GOP colleagues (including climate change denier-in-chief James Inhofe (R-Okla.)) might be barking up the wrong tree: A major thrust of their complaint against McCarthy, a feisty Bostonian currently overseeing EPA’s air quality division, hinges on the use of email aliases by top EPA officials and the possibility that they’ve used personal email accounts for official business, an issue currently under investigation by the EPA Inspector General.

Outgoing EPA administrator Lisa Jackson and Bush-era EPA head Christie Whitman both created official email addresses under fake names (Jackson’s was “Richard Windsor,” after a pet dog), apparently to circumvent a chronic deluge of spam. McCarthy says she doesn’t have an alias email and told the Senate committee she found only one instance of using her personal email for work—which didn’t stop Vitter, in the memo, from demanding a full audit of her personal emails.

And while the use of unofficial email addresses beyond the reach of federal public records laws clearly raises the specter of important information being kept in the dark, few in the transparency or environmental journalism communities think it should be the focus of complaints about the agency’s openness.

“The concerns over fake emails are totally bogus,” says Joe Davis, a veteran environmental journalist and a member of the Society of Environmental Journalists’ freedom of information taskforce. “This wasn’t some made-up thing by Lisa Jackson to fool us all. They’re simply efforts to politically damage McCarthy and Lisa Jackson and EPA by people with an anti-regulatory agenda.”

Indeed, a review of a cache of “secret” emails from Jackson uncovered such pressing matters as whether “turducken” is a real thing (it is), and lyrics for a Santa-themed jingle about coal ash regulation.

The problem, Davis said, is that focusing on the emails distracts from more legitimate transparency concerns, like whether McCarthy mislead Congress about greenhouse gas regulations, lawsuits alleging the EPA deliberately destroyed official instant messaging threads, and what Davis describes as a longstanding agency-wide pattern of rebuffing the news media—a pattern that has only gotten worse during the Obama administration. And if Senate Republicans are asking the wrong questions, Davis says, they’re at least doing better than Democrats, who haven’t raised any questions in the nomination process about the EPA’s openness with the media.

There’s plenty that could use a good airing: Back in 2010, the EPA asked the natural gas industry to cough up details on the ingredients in fracking fluid after companies were caught pumping toxic chemicals like benzene and toluene into the ground. It was a chance to shine a light on a practice that had been notoriously murky since being exempted from Safe Drinking Water Act disclosure rules five years before. There was only one problem: Under industry pressure, the EPA agreed to keep the ingredient lists a secret from the public, and by last year was still scrambling just to get the lists for themselves.

Transparency is “a chronic, burning issue at EPA.”

Meanwhile, a rule to crack down on toxic coal ash disposal that EPA boss Lisa Jackson hoped would be one of her flagship achievements was watered down during closed-door meetings with industry groups and then mysteriously delayed; with Jackson on her way out, it has yet to be finalized.

President Obama’s broader campaign promises to bring more transparency across the federal government have fallen short, and environmental watchdogs have called foul on the EPA in particular for shutting out journalists, controlling messages for political gain, obfuscating public comments on proposed policies, and a host of other transparency issues. A 2008 Union of Concerned Scientists study found that hundreds of EPA scientists had their work interfered with by officials for political reasons.

Transparency is “a chronic, burning issue at EPA,” says the SEJ’s Joe Davis. “It’s a way of insulating themselves from PR disasters and political and public accountability.”

An EPA spokesperson declined to comment for this story, instead forwarding an April 8 letter from McCarthy to Vitter saying that “the Agency should strive for excellence with respect to transparency and accountability.” And there are already indications that McCarthy has a different view from many environmental journalists of what “excellence” would look like. At a panel last September hosted by the Union of Concerned Scientists, McCarthy defended the agency’s practice of keeping their staff scientists under lock and key—and away from journalists: “It is the job of the agency to make sure that personalities don’t get in the way of really discussing the science in a way that maintains the agency’s credibility,” she said then.

The EPA is the environmental agency perhaps most often besieged by private industry and Republicans, and its transparency record makes it a sitting turducken for this kind of criticism, said Nancy Watzman, a consultant with the Sunlight Foundation, which monitors government openness.

Still, Watzman said, given the preponderance of transparency problems at the EPA, it’s critical for lawmakers to choose their battles wisely: “Transparency is kind of a feel-good word,” she said, but one that can too easily be wielded as a cudgel. “We believe in it, but it’s often used in a political way.”