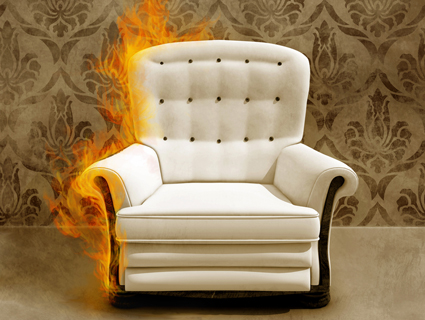 The EPA announced this week that it will study the health and environmental risks of 23 chemicals, with an emphasis on chemical flame retardants that are found in many common products.

Even though they were phased out of baby clothes back in the 1970s due to health concerns, flame retardants are still used in baby cribs and car seats, couches, and electronics. Many have been linked to cancer and neurological and developmental problems, particularly in children. And we use so much of them that they’re turning up in our food, too.

The EPA’s announcement came just as a new study found extremely high levels of flame retardant chemicals on airplanes—”some of the highest measurements I’ve ever seen,” according to the paper’s co-author. This is less of a concern for airline passengers than it is for the pilots and flight attendants, but it does raise questions about yet another way we’re being exposed to potentially dangerous chemicals.

The EPA plans to evaluate four common flame retardants—TBB, TBPH, TCEP, and HBCD—under the Toxic Substances Control Act (TSCA), the 37-year-old law governing chemical regulation. As we’ve reported here before, that law is both weak and outdated, an issue that the EPA noted in its announcement on Wednesday:

“EPA is committed to more fully understanding the potential risks of flame retardant chemicals, taking action if warranted, and identifying safer substitutes when possible,” said James J. Jones, Acting assistant administrator for the Office of Chemical Safety and Pollution Prevention. “Though today’s announcement represents a significant step forward on chemical safety, it’s important to remember that TSCA, this country’s chemicals management legislation, remains in dire need of reform in order to ensure that all Americans are protected from toxic chemicals in their environment.”

TSCA reform advocates point to flame retardants as an example of why current chemical regulations are a total failure. EPA is just now evaluating their safety, after decades of human exposure to these chemicals. “Flame retardants have become exhibit A for our nation’s failed chemical policy,” said Andy Igrejas, executive director of Safer Chemicals, Healthy Families. “Many have have turned out to be very toxic, and yet they have found their way into our homes and our bodies through their use in consumer products.”