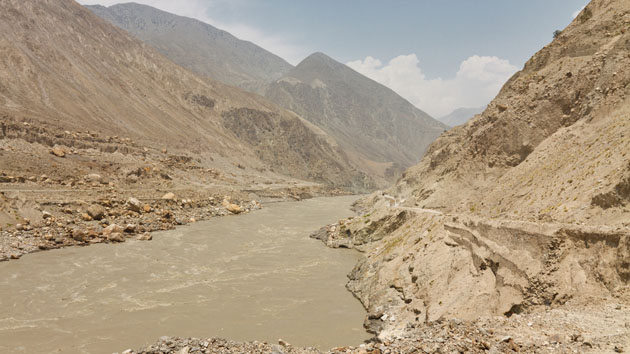 This story first appeared in The Atlantic and is reproduced here as part of the Climate Desk collaboration.

In a report released last week by the Asian Development Bank (ADB), Pakistan was pinpointed as “one of the most water-stressed countries in the world, not far from being classified, ‘water-scarce.'” As water demand exceeds supply in the South Asian country, more and more water is being withdrawn from the nation’s reservoirs, leaving them in a critically precarious position. According to the ADB, Pakistan’s storage capacity, the amount of water it has on reserve in case of an emergency, is limited to a 30-day supply—far below the recommended 1,000 days for countries with similar climates. Without meaningful action, a water crisis could push the country into further chaos.

Consider what a water shortage means for Pakistan. The last several years have seen the country plagued by chronic energy scarcities. Power outages lasting up to 18 hours a day are routine throughout the country, and they have had damaging effects on the economy and on the wellbeing of Pakistanis. Citizens frequently take to the streets, demanding a solution from their government in protests that often turn violent, worsening an already tumultuous political environment. Deficiencies of another precious natural resource, such as water, have the potential to intensify the already unstable situation in the country.

Early signs of the potential imbroglio that could transpire are already beginning to take shape. Late last week, residents in Abbottabad vowed to hold mass demonstrations if the local government was unable to address rampant water shortages in the city. The city has lacked sufficient water for the past month, with over 5,000 homes impacted in the hottest months of the year.

At a conference organized around water shortages in the province of Sindh earlier this month, leaders of political parties and various trade organizations blamed a wide array of individuals, including former Pakistani heads of state, other provinces in the country, and even Pakistan’s neighbors, for the nation’s water woes.

Extremist groups, of which there is no dearth in Pakistan, have also weighed in on the matter, using it as an opportunity to garner support for their movement. Hafiz Saeed, the founder of the militant group, Lakshar-e-Taiba—the organization behind the 2008 Mumbai attacks—has unequivocally blamed India for Pakistan’s water crunch, accusing its government of committing “water terrorism.” By evoking an issue that is sensitive to millions of Pakistanis, Saeed’s rhetoric demonstrates the potential of militant groups to exploit this issue.

The country’s demographics make it seem as though this trend will only worsen over time. Pakistan’s population has grown exponentially over the past several decades. With two-thirds of the population currently under the age of 30, the nation of 180 million is expected to swell to 256 million by the year 2030, and demand for water will only grow. Meanwhile, climate change, which has reduced water flows into the Indus River, Pakistan’s main supply source, will continue to shrink the available water supply.

The response to any crisis is likely to play out, in part, through Pakistan’s foreign policy. For starters, the government has been pushing to redefine the terms of the Indus Water Treaty of 1960—the water-sharing plan struck between India and Pakistan that outlines how the six rivers of the Indus basin would be shared. Pakistan has recently contested the construction of Indian dams on rivers that begin in India but flow into Pakistan, arguing that the dams would restrict Pakistani supply.

The dispute, which is currently being reviewed by the International Court of Arbitration in The Hague, will clearly impact the relationship between the two historic rivals, as water demand increases in both countries. But with pressure mounting from various groups within Pakistan, and the likelihood of instability increasing due to shortages, the Pakistani government may find itself in a difficult position when negotiating with India—it will have limited bargaining room against an Indian government that may be reluctant to renegotiate a treaty that has been in place for 53 years.

There are other ways, outside of India, for Pakistan to alleviate the problem. Requiring and enforcing updated, modern farming techniques is a start. Pakistan’s agriculture industry is notorious for its inefficient irrigation and drainage processes, which have contributed to the scarcity. The government will also need to reach out beyond its borders to create solutions. The Memorandum of Understanding between the Karachi Water and Sewage board and the China International Water and Electric Corporation, which strives to make Karachi self-sufficient in water supply, is one example of how deliberate international efforts can help the situation.

Water deficiency, and how Pakistan responds to it, has the propensity to shape the country significantly over the next several years and decades. Without any meaningful action, the future looks alarming. A growing population without the resources it needs to survive, let alone thrive economically, will throw the country into a period of instability that may be far worse than anything we see today.