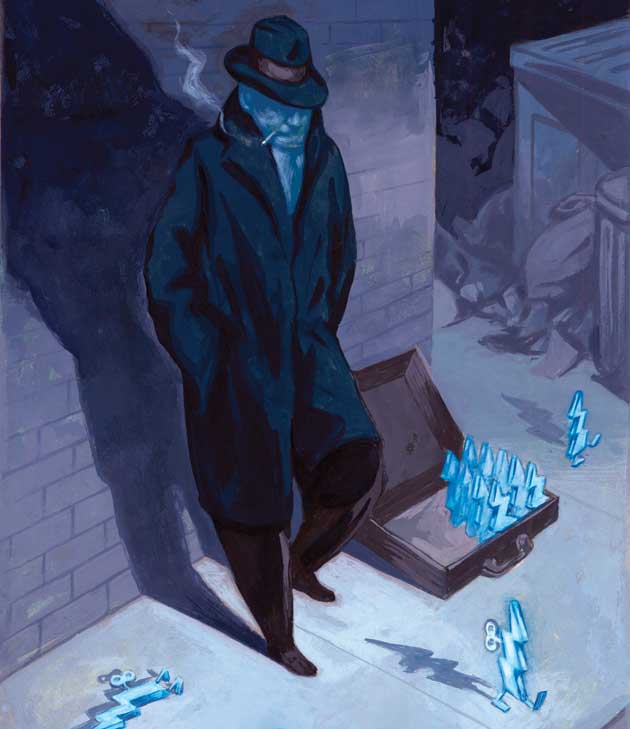 Mabel Buford hadn’t been home from the hospital very long when a sales rep knocked on her door in Washington, DC, and announced that she could save her some money. Buford, a 72-year-old widow who is battling cancer, told the woman she didn’t feel well. But the sales rep wouldn’t leave. For the next hour, she urged, cajoled, and pressured Buford to show her one of her electric bills. Finally, exhausted and groggy from medication, Buford relented. “I just got tired of her,” she says.

Plug and Played: Meet some of the shady operators lurking in the retail power market.

The sales rep put Buford on the phone with her company, Starion Energy, to sign up. Buford, a retired federal contracts officer, warned that she had a contract with another electric provider and wanted no trouble with her bills. “She promised it would be okay,” Buford recalls. “She honest to God stood over the stoop and hugged me. I told her, ‘Don’t play with me.’ But, see, she tried it anyway.”

A few weeks later, Buford got two electricity bills—one from Starion and one from her old provider. Livid, she filed a complaint with the city’s consumer protection agency, which helped her escape Starion’s contract without the termination fee the company wanted. (Starion declined to comment.) Buford’s was one of a wave of complaints rolling in across the city—and throughout the 16 states with deregulated utility markets, where a host of new retail electric companies are chasing consumers with hard-sell offers to switch away from traditional utilities like DC’s PEPCO or New York’s Con Edison.

A market that lacks both regulation and transparency, with a product everyone buys and few people really understand, has proven a target-rich environment for the kind of operators previously drawn to mortgage rip-offs, long-distance schemes, and multilevel-marketing (MLM) companies. One consumer advocate likens it to the “Wild West” of the mortgage business before 2008.

Retail electric companies aren’t really power companies. Instead, they’re middlemen who buy power in the wholesale market, largely from the same power plants once owned and operated by the monopoly utilities that were broken apart in the late 1990s and early 2000s. Retail firms then sell the electricity to consumers, delivering it via the transmission lines still owned by traditional utilities. All that really changes is the name on your bill.

But there’s one major difference: A traditional utility like Con Ed can’t raise electric rates without justifying the need to regulators and the public. Retail companies have no such requirement, meaning they can jack up prices at will. These companies have aggressively employed telemarketing, door-to-door visits, TV ads, and pamphlets, luring customers into restrictive contracts promising savings that did not materialize. The problem has gotten so bad in New Jersey that legislators are considering a bill to restrict the number of calls an electric company can make to a consumer. In January 2013, New York‘s attorney general told the state public service commission that 91.5 percent of upstate low-income consumers who’d switched over were paying higher rates than if they’d stuck with the traditional utility.

“One of the key things they teach people is ‘Do not talk about rates.’ Talking about rates is called ‘the valley of death.'”

Paula Carmody, the people’s counsel for the state of Maryland, says allegations of dubious marketing among retail energy suppliers are not uncommon in her state, ranging from “slamming”—switching a customer to a new utility without authorization—to unintelligible contracts and excessive fees. Maryland’s public service commission last year slapped Viridian Energy with a $60,000 fine after it ran ads promising massive savings (which never materialized) and its reps distributed flyers bearing the logo of the state’s regulated power company, suggesting an association. In 2011, the commission fined North American Power Company $100,000 for similar problems. And Carmody says the regulators are only scratching the surface: “An agency like mine is so tied up with regulated utility cases, rate cases, merger cases, we don’t have the resources to consistently go in to monitor what’s going on in the marketplace.”

Much of the groundwork for the uptick in abuses was laid by Enron, the Houston energy company that melted down epically after being exposed for manipulating power markets. Enron lobbied hard to break up monopoly utilities and to allow the entrance of retail competitors into electricity markets. But the recent spike in abuses also stems from an unlikely source: fracking, which has produced a glut of cheap fuel, leading to unusually low and stable electricity prices. As a result, it has become far easier to start up a retail electric company, says Tyson Slocum, who heads the energy program at the advocacy group Public Citizen.

The companies attracted by the low barrier to entry and the potential for easy cash include some familiar—and colorful—characters. One of Starion’s founders, for example, was previously alleged to have run what the Connecticut attorney general called a “one-stop shopping predatory lending scheme.” In 2006, Robert Zappone and his business partners agreed to pay $750,000 to that state to settle charges that they’d lured people with poor credit or limited English into their “Mortgage SuperCenter,” falsified applications, and saddled them with loans that often went to decrepit, overpriced houses sold by another Zappone company. Many of the buyers ended up filing for bankruptcy and losing their homes. At Starion, Zappone is in charge of recruiting and training door-to-door salespeople like the one who visited Mabel Buford, according to Maryland regulatory documents. 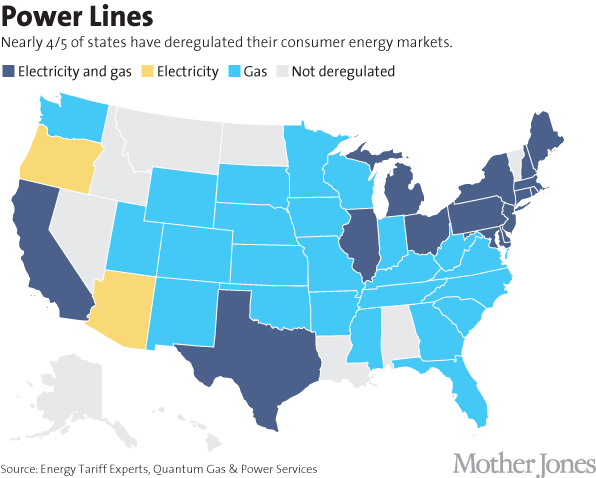 Then there’s Virgin Islands-based Glacial Energy, which operates in 20 states. According to legal documents, its shareholders have included Donald Bernard, a lawyer who surrendered his license in lieu of disciplinary proceedings after he “loaned” money from a trust he oversaw to one of his own companies and failed to repay it in a timely fashion. Another of Glacial‘s investors, the documents indicate, was Peter Koeck, an Austrian immigrant alleged by immigration officials to have neo-Nazi connections. (He was also arrested for cocaine possession in Texas in 1996.) When federal authorities raided a house Koeck owned in Las Vegas, they found 62 firearms, an illegal silencer, and 42,459 rounds of ammunition. Koeck was forced to leave the country in 2004.

In a 2011 lawsuit, a former business partner of Glacial Energy’s then-CEO, Gary Mole, accused the company of being a “racketeering enterprise” created to launder money for a blood diamond mining operation in the Democratic Republic of the Congo. Glacial denied those allegations, and it prevailed in the lawsuit. But in 2012, Texas regulators moved to revoke Glacial’s state license after allegations that the company hadn’t disclosed Mole’s role in a previous retail electric venture that failed, leaving consumers in the lurch. In August, Glacial agreed to pay $100,000 in fines and replace Mole.

Mole says he is no longer involved with Glacial, which now has new owners, and denies the Congolese diamond allegations. “I haven’t even bought my wife a diamond,” he says. “I’ve never even been to the Democratic Republic of Congo.” Mole says he’s never met Koeck. Koeck declined to comment for this story.

Stream Energy, a Texas-based company licensed in six states and DC, claims it has earned more than $5 billion since it was founded in 2005. Among its leaders are top executives of a bankrupt MLM long-distance phone company; in 2011, some of its salespeople filed a class action suit against Stream and its MLM arm, Ignite, alleging the operation was a pyramid scheme. According to the complaint, in 2008, more than 30 percent of the company’s 330,000 electric customers were also “directors,” salespeople who’d paid $329 for the right to recruit customers, and the company was adding directors at nearly twice the rate it was finding regular buyers for its electric services. That same year, it allegedly earned more than $9 million in fees from distributors who never made a dime, and another $20 million from salespeople, whose average take was $174.

Hedge brushed off concerns about pyramid schemes: “I don’t care if you call it an octagon, parallelogram, rectangle. They’re sending me a check!”

Amy Power, a spokeswoman for Stream/Ignite, said in an email that the lawsuit is “spurious and unfounded.” She added, “We are confident we will prevail when the merits are finally addressed and these baseless smear campaigns are ended.”

One of Stream/Ignite’s top salespeople, Randy “The Cowboy” Hedge, seems even less perturbed. A folksy former insurance salesman from De Queen, Arkansas, who dons a 10-gallon hat for high-energy recruiting pitches, Hedge brushed off concerns about pyramid schemes in one of his presentations: “I don’t care if you call it an octagon, parallelogram, rectangle. They’re sending me a check!”

Stream’s variable-rate customers pay significantly more than those of the state’s monopoly utilities, in some cases two or three times as much per kilowatt-hour. (Stream says its rates are competitive.) “One of the key things they teach people [through Ignite] is ‘Do not talk about rates,'” says Scott Clearman, the attorney who has sued Stream and Ignite. “Talking about rates is called ‘the valley of death.'” Texas regulators fined Stream nearly $100,000 in 2011 and 2012 for violating customer protection rules.

With little regulation at the federal level, questionable operators find it easy to do business in one state even while under scrutiny in another. For instance, Starion was under investigation in Connecticut for illegally switching customers to its service, yet at the same time Maryland granted it a license. (The company is currently being investigated in four of the eight states where it operates.) And penalties, says Slocum, are often so low that companies accept them as a cost of doing business: “You engage in false and deceptive stuff, and then you pay a fine and you keep going.”

In DC, the public service commission has held hearings on Starion’s conduct and is negotiating a settlement. Meanwhile, Buford has talked to her neighbors, who’ve also been pestered by energy companies, and they plan to slam the door on any sales reps who show up. The woman from Starion, Buford says, “stood there and lied to me. I’m not the only one, but I’m the one she shouldn’t have messed with.”