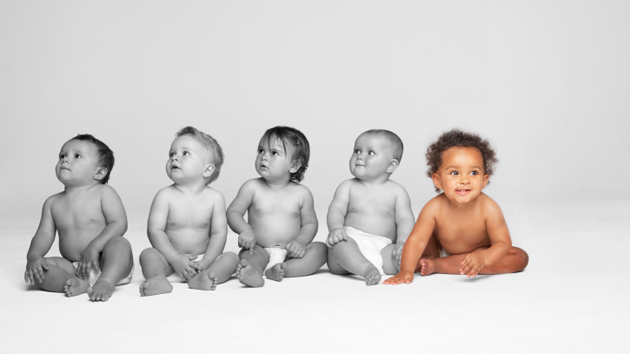 The world is warming. The beasts are dying en masse. The oceans are rising. The deserts are roasting. It’s the survival of the fittest out there, guys. Who’s going to win, evolutionarily speaking?

It turns out that warming temperatures may have a surprising gender bias—in favor of women. That’s the conclusion of a team of Japanese researchers who have discovered a “statistically significant” association between climate change—including rising temperatures and extreme weather events—and the birth rates of boys and girls in Japan. Warmer temperatures have accompanied an increased proportion of female babies in the population, and a decline in males.

The findings, published in the journal Fertility and Sterility—reveal that the proportion of male Japanese newborns has steadily declined since the 1970s. At the same time, the number of male “fetal deaths” during that general period—those that were spontaneously miscarried after 12 weeks of pregnancy—has increased. The researchers see a clear link to Japan’s temperature fluctuations. 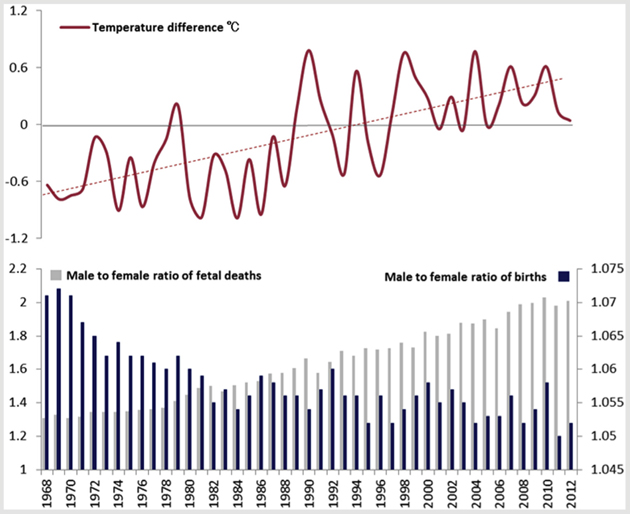 The team also picked out one very hot summer in 2010—Japan’s warmest since 1898—and one very cold winter in 2011, and found similar trends linked to climactic extremes: more fetal deaths followed by a lower ratio of male to female newborns.

It’s not an open and shut case. The researchers point out that climate change certainly isn’t the only factor affecting the newborn gender ratio—and they stop short of arguing that there’s a causal relationship between increased temperatures and more female offspring.

In general, the birth ratio is fairly constant around the world, with sightly more males born than females. And while the science is far from settled, female fetuses appear to be the tougher of the two when presented with outside stresses. At a population level, the gender mix at birth is thought to be influenced by external factors such as air pollution, chemical exposure, and “extraordinary stresses” like war and economic hardship. The Japanese researchers argue that male fetuses appear “especially vulnerable” to these factors, “including climate changes.”

Their hypotheses are supported by other studies. “The results regarding the association between the increase in annual temperature and the change in sex ratio seem fairly robust,” says Claudia Valeggia, a professor of biological anthropology at Yale University, who did not work on the study, but reviewed the findings at my request. “There seems to be now very strong evidence suggesting that male fetuses are more vulnerable, in general, to sub-optimal conditions—for example maternal malnutrition or stressful situations.”

A study published in The Lancet in 1997, for example, documented a decline in the proportion of male newborns in Denmark between 1951 and 1995, possibly due to environmental hazards. Another study looking at China’s famine during the tumultuous Great Leap Forward—a failed economic program to rapidly modernize the countryside—from 1959 through 1961 and found that women during that period were more likely to give birth to girls.

A more recent Swedish study showed that the temperature shifts expected from climate change could influence which fetuses—male or female—would be more likely to survive pregnancy and succeed in a more extreme world. Natural selection, they argue, tends to favor female babies during times of temperature upheaval, with mothers’ bodies evolutionarily programmed to give birth to girls.

“When you are not 100 percent in top shape, it’s more advantageous, evolutionarily speaking, to carry on with a female fetus pregnancy,” Valeggia says; that’s because women are more stable producers of offspring, so it’s better to have more of them around when times are tough.

And yet similar studies using data sets from Finland and New Zealand failed to produce any compelling connections between temperature and male-to-female sex ratios.

The Japanese researchers, led by Dr. Misao Fukuda, of the M&K Health Institute in Ako, acknowledge the discrepancy, but point out that Finland and New Zealand don’t experience the same enormous shifts in temperature between summer and winter as Japan does. Japan has also warmed at a greater rate than the global average over the last century, which might account for the differences in the results.

Valleggia is less convinced on this point. “I would like to see this repeated in other latitudes, with variations in temperatures in different parts of the world,” she says. Another aspect unaccounted for in the Japanese study, she notes, is that in Japan “most of the population must have some kind of access to shelter from these wide swings in temperature,” due to air-conditioning and central heating. “I would like to have more data on populations in which this is not the case, like developing countries, where you don’t have this kind of manmade shelter from temperature changes.”

So will climate change give rise to a female super-race? No—these birth fluctuations are small ones. Vallegia cautions that this is a study of demographics at a population level, not a study of impacts on individual pregnancies. That is, pregnant women should not take it to mean they should avoid warmer temperatures. So you’re free to enjoy the beach.