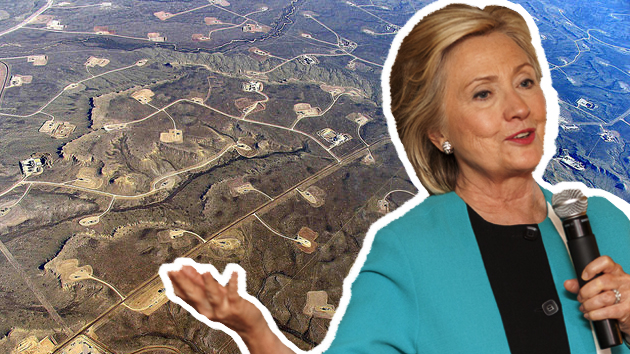 The story was originally published by the Huffington Post and is reproduced here as part of the Climate Desk collaboration.

Nearly all of the lobbyists bundling contributions for Democratic presidential candidate Hillary Clinton’s campaign have at one time or another worked for the fossil fuel industry.

A list of 40 registered lobbyists that the Clinton camp disclosed to the Federal Election Commission on Wednesday revealed a number of Democratic Party lobbyists who have worked against regulations to curb climate change, advocated for offshore drilling, or sought government approval for natural gas exports.

Clinton, the former secretary of state, has called climate change the most “consequential, urgent, sweeping collection of challenges we face as a nation and a world” and says it would be a major focus of her administration if she wins the White House. But having so many supporters who have sold their services to fossil fuel companies may complicate her emphasis on pro-environment policies.

Scott Parven and Brian Pomper, lobbyists at Akin Gump Strauss Hauer & Feld, have been registered to lobby for the Southern California-based oil giant Chevron since 2006, with contracts totaling more than $3 million. The two bundled Clinton contributions of $24,700 and $29,700, respectively. They have helped Chevron over the years resist efforts to eliminate oil and gas tax breaks and to impose regulations to reduce carbon emissions.

The two Clinton bundlers also were part of a much-criticized campaign by Chevron to manipulate Congress into inserting language into the Andean Trade Preferences Act that would require Ecuador to dismiss a longstanding lawsuit against the company for polluting the Amazon jungle. Democratic lawmakers pushed back against the campaign and the lawsuit is continuing.

One prominent lobbying topic embraced by Clinton bundlers is the expansion of liquefied natural gas exports and federal approval of new LNG terminals.

Ankit Desai, vice president for government relations at top LNG exporter Cheniere Energy, bundled $82,000 to the Clinton camp, with much of it coming from Cheniere Energy executives. Cheniere executives, including Desai, have donated $38,800 to Clinton’s campaign.

The company has lobbied hard in Washington and maintains close ties to the Obama administration. The company won the first approval to export gas to countries outside of US free-trade agreements. The company is seeking approval to open additional terminals to export LNG, and will likely need a friend in the White House come 2017.

ML Strategies’ David Leiter lobbied in 2014 on behalf of Sempra Energy when the company received approval for its LNG export facility in Hackberry, Louisiana. Leiter, who bundled $36,550 for Clinton’s campaign, also is a lobbyist for ExxonMobil. Steve Coll noted in a New Yorker article derived from his book on the oil giant, Private Empire, that Leiter, an ex-staffer to former Sen. John Kerry (D-Mass.), was retained, along with a host of others, to increase the company’s reach into the Democratic Party it had ignored for years.

ExxonMobil’s top lobbyist in Washington, Theresa Fariello, may not be a bundler for Clinton’s campaign, but she is a donor. Fariello, who was a Department of Energy official in President Bill Clinton’s administration, gave $2,700 to Clinton’s campaign. Another Washington-based Exxon lawyer, Judith Batty, donated $2,700.

Aside from lobbyists currently working to advance fossil fuel interests, there is one Hillblazer bundler—the name for Clinton boosters raising more than $100,000—who stands out.

Bundler Gordon Giffin is a former lobbyist for TransCanada, the company working to build the controversial Keystone XL pipeline. Giffin sits on the board of Canadian Imperial Bank of Commerce, an investor in the pipeline. The Canadian bank paid Clinton $990,000 for speeches in the months leading up to her presidential announcement. Another Canadian financial institution with an interest in Keystone XL, TD Bank, paid her $651,000 for speaking engagements.

Clinton’s position on Keystone XL—or lack thereof—may prove the biggest challenge for her in gaining support from progressive activists. Whether to grant a permit for the leg of the pipeline that crosses the Canadian border into the U.S. is up to the State Department, which has been considering it since Clinton’s time as secretary of state. In October 2010 remarks, Clinton said the department was “inclined” to sign off on the pipeline, a statement that enraged environmental groups working to stop it. On the campaign trail, Clinton has largely evaded questions about the pipeline.

But the issue has dogged Clinton. The speaking fees from Canadian banks came to light in May. In June, Clinton’s campaign announced the hiring of former TransCanada lobbyist Jeff Berman as a consultant.

The issue of campaign donations from fossil fuel interests has become a topic in the Democratic Party primary, as both Sen. Bernie Sanders (I-Vt.) and former Maryland Gov. Martin O’Malley have pledged they will not accept contributions from oil, gas or coal companies. Clinton has not signed that pledge.

“I’m disappointed about the answer you gave to climate change,” Giselle Hart, an activist with 350 Action, told Clinton.  I’m wondering if your answer…is due to contributions from the fossil fuel industry to your campaign.”

Activists unfurled banners and demanded that Clinton support a ban on fossil fuel extraction on public lands. Clinton responded that she would phase out extraction over time, though not immediately. “We still have to run our economy, we still have to turn on the lights,” she said.

Reached for comment, a representative for the campaign simply pointed HuffPost to Clinton’s remarks at the Thursday’s town hall.