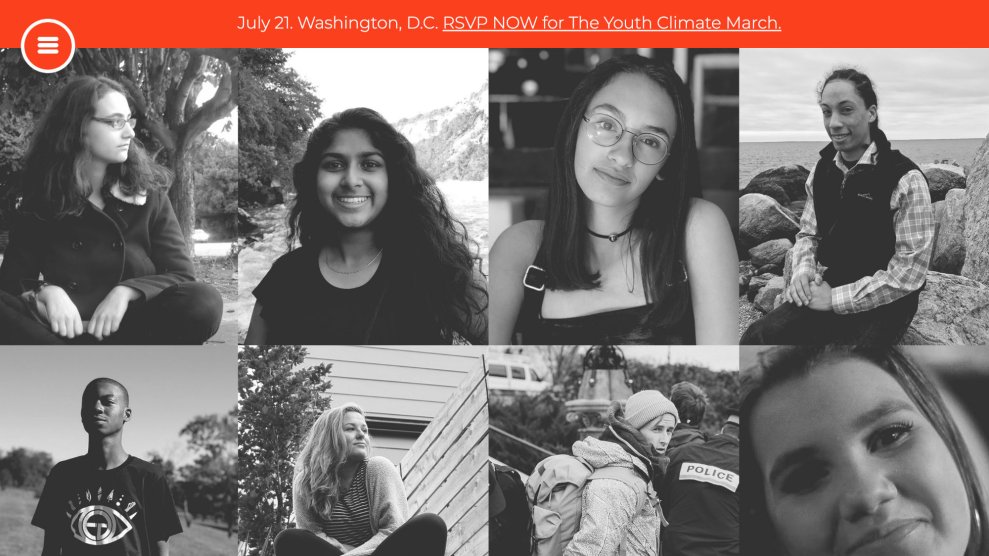 Fifteen months ago, thousands of protesters swarmed the streets of Washington, DC, and other cities all over the world in a climate march that even included a group of 1,000 grandmothers and an appearance by actor Leonardo DiCaprio.

That may not be an easy event to top, but a group of teenagers have organized a series of climate mobilization events taking place this weekend around the world, in cities from Washington, DC, to Butere, Kenya. The three-day event is the culmination of months of planning by over 20 student organizers from across the country.

Zero Hour, the group organizing the events, was founded last year by four teenagers who described the organization on its website as “a movement of unstoppable youth,” fighting for a clean, safe, and healthy environment that will “ensure a livable future where we not just survive, but flourish.” One of the founders, 16-year-old Jamie Margolin, described the origin of the name to Mother Jones: “It’s zero hour to act on climate change. Let’s take advantage of this window of time we have left. Let’s change everything, because the world literally depends on it.” Already, the teen activists have been endorsed by the Sierra Club, Citizens Climate Lobby, and other advocacy groups.

In looking at the power of teen activists who organized the March for Our Lives, Margolin said that she and other young activists realized this was kind of “attention and urgency [was] exactly what we at Zero Hour have been trying to instill for climate change.”  They put together an ambitious agenda of events in the Nation’s Capital this week before the weekend march. On Thursday, members went to Capitol Hill to lobby lawmakers and legislative staffers from both sides of the aisle to take a pledge to accept no donations from fossil fuel companies.

#ThisIsZeroHour youth meeting with @elizabethforma office to talk about #climatechange and ask her to take the #NoFossilFuelMoney pledge. Their response – “she has not and will not take #fossilfuel money.” GREAT. @SenWarren take the pledge publicly here 👉 https://t.co/BKiAEFL0Fl pic.twitter.com/YqYgYT3283

“We appreciate the work that @marcorubio has done…but we need moral clarity from him. We need him to stand with our generation and take the #NoFossilFuelMoney pledge.”—@FernandoGarciC with @ThisIsZeroHour

On Friday, there was an arts festival organized by Baltimore-area high schooler Nadia Nazar, a Zero Hour co-founder who also is in charge of designing graphics and managing their partnerships. “We really wanted to get young voices and young performers out there,” she says.

Among the performers was hip-hop artist Xiuhtezcatl Martinez, one of 13 kids who, along with Margolin, joined a lawsuit against the state of Washington in February for not doing enough to curb the effects of climate change. The centerpiece is a Saturday rally on the National Mall. Broadway actress Antonique Smith and 7-year-old Havana Chapman-Edwards, also known as “the tiny diplomat,” are featured speakers. Chapman-Edwards garnered headlines as a the only student at her school in Alexandra, Virginia, who joined in the National School Walkout on April 20, protesting gun violence in schools.

Even though climate action and environmental justice are the group’s primary focus, Zero Hour’s leaders also affirm that “queer and trans people must be heard,” “rape culture must be dismantled, and “people with disabilities must be included and respected.” These views not only align Zero Hour with the wider progressive movement, but, they say, also underscore the importance of diversity and inclusion in addressing the implications of the Trump administration’s environmental policies.

Kibiriti Majuto, a 20-year-old refugee who was born in the Democratic Republic of the Congo, was in charge of developing the platform and says he was proud of the way it represented intersectional progressive goals. “Our platform is very multi-class,” he said, adding that the guidelines encompassed respect for people of all identities and racial backgrounds.