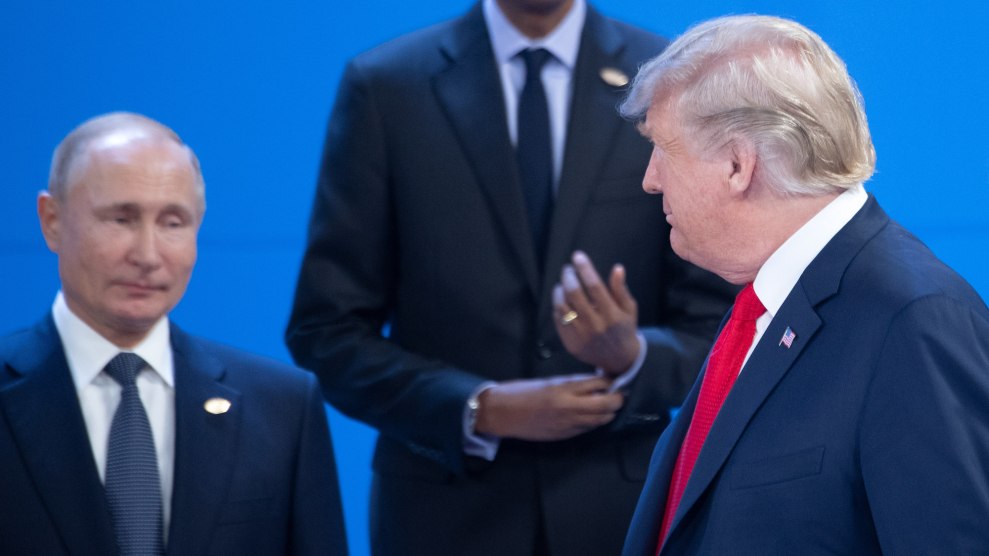 The United States was one of the 196 countries that adopted a climate agreement on Saturday, which took the shape of a 133-page rulebook for implementing the landmark 2015 Paris climate change negotiations. The Katowice deal from the United Nations talks signals that the world should step up its ambitions beyond current pledges—which are far from adequate to contain warming to under a disastrous 2 degrees Celsius—when the Paris agreement kicks into effect in 2020.

Negotiators with the UN Climate Action summit ended up with a deal that was a mixed bag of ambition and unresolved issues. Anytime the United States does anything to acknowledge that climate change is a problem now seems remarkable, but there were also signs of Trump’s ability to overturn norms. These talks marked the first illustration of how petro-states like Russia and Saudi Arabia are able to assert their power on the global stage when the United States leaves a vacuum.

The meeting in Katowice, Poland, ran overtime after a series of all-nighters when participants grappled with establishing clear benchmarks for progress in terms of both transparency and reporting measures. The eleventh-hour scramble is not an unusual situation for conferences that involve some 23,000 negotiators sorting through a dizzying number of issues. This meeting had another layer of complexity, thanks to the outspoken climate change denier in the Oval Office. While the smaller-than-usual US delegation—mostly career officials—largely cooperated in the talks, there were a few notable exceptions. The biggest occurred when the United States joined three petro-states—Russia, Saudi Arabia, and Kuwait—to water down the UN’s commitment to a recent scientific report that examined the damaging global effects of 1.5 degrees of Celsius.

Following the cooperation among these four countries, New York Times columnist Paul Krugman described Russia, Saudi Arabia, and the United States as “a new axis of evil.” This informal bloc seemed to underscore concerns by some negotiators that Trump would form an “axis of mass destruction” with Russia to block momentum on climate action.

The oil-rich government of Saudi Arabia has long played a spoiler role in climate negotiations. In 2009, for example, Saudi Arabia warned before the climate negotiations that year in Copenhagen that an email hack targeting climate scientists, dubbed Climategate, would have a “huge impact” on the negotiations. Ultimately, the hack turned out to be a minor problem in a dysfunctional conference that failed to produce a meaningful agreement. Saudi Arabia tried to argue it deserved compensation for its oil as the world moves off fossil fuels, and while that request was a non-starter, Copenhagen ultimately produced a weak deal that failed to bridge old divides between historically large polluters and relative newcomers like China and India.

But the view that the United States will spearhead a damaging coalition with Russia was never quite right. Russian President Vladmir Putin has gamed global climate politics for decades, and he exploits the weaknesses in the US position on climate change exceptionally well. He has seen the rollercoaster of climate policies across the administrations of Bill Clinton, George W. Bush, and Barack Obama. Whether expressing skepticism and outright denial of the climate science or exchanging support for a climate pact for transactional gain, Putin has always seemed less interested in participating in an axis for disruption than gaming the situation for his own self-interest. Russians “really always have kept their cards closest to their chest in negotiations,” says World Resources Institute’s Andrew Light, a former State Department official. “Russia has always been an enigma in the talks because they’re never out there transparently on what their positions are.”

The Russian leader is neither as overt nor as consistent in his climate change denial as President Donald Trump, but he’s long played the contrarian to cast doubt on the science and seriousness of the issue. What distinguishes him from Trump is his unpredictability; Putin has always lagged behind the world’s pulse on climate change, yet he hasn’t actively disrupted international agreements in the way the United States has. Instead, he’s capitalized on the instability, especially when the United States has either retreated or completely reversed itself on climate change.

The clearest example of Putin’s transactional approach was in response to the Kyoto Protocol from 1997. That was the world’s first major attempt at a legally binding treaty to cap greenhouse gas pollution, which the United States ultimately never ratified because of political opposition. Russia’s support for Kyoto was far more critical to make the pact enforceable in the US absence. Putin played coy for years until Russia ratified the agreement in 2004, “with the proviso that European members approve Russia’s participation in the World Trade Organization.” Leading up to the Paris agreement, Light remembers, “Russia was the big party we knew the least about when it comes to their views coming into the meeting.”

In the end, Russia and Saudi Arabia agreed to the terms of the Katowice deal, showing how they strategically play a spoiler role only when there is political cover. Trump’s climate change denial provided that cover during these UN talks, and could do still more damage when negotiators meet again in 2019 to determine the next incremental gains in reducing greenhouse gases that were laid out in Paris. Russia “didn’t want to be isolated,” Light told me last year, “and now they don’t have to be.”