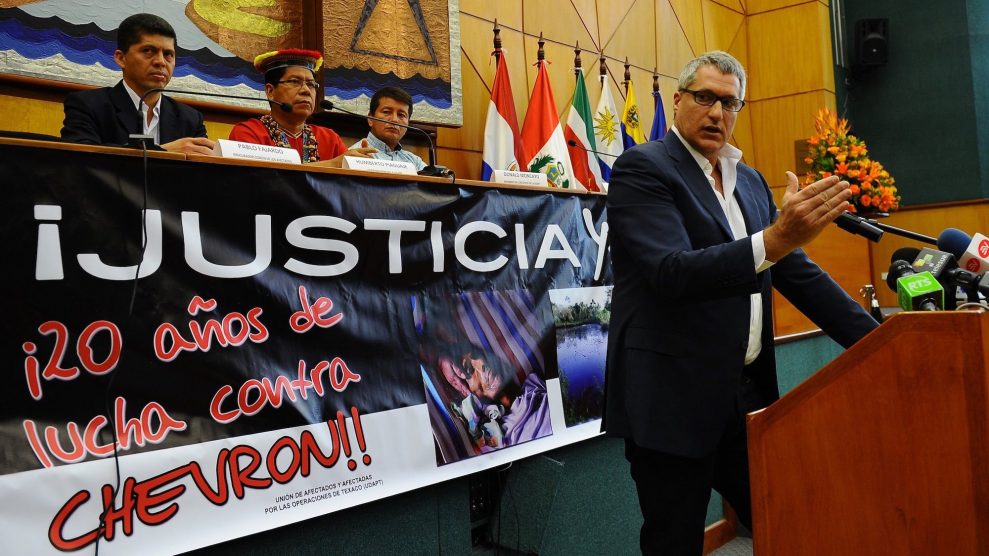 Steven Donziger, gestures during a press conference on March 19, 2014 in Quito, Ecuador.Rodrigo Buendia/Getty

Last September, I travelled from Western Canada to New York City to see the human rights lawyer Steven Donziger. Donziger cannot travel. He cannot even stroll the hallway of his Upper West Side apartment building on 104th Street without special court permission. He remains under house arrest, wearing an ankle bracelet.

Eight years ago, Donziger and a team of Ecuadorian lawyers, on behalf of Indigenous and farmer plaintiffs, won the largest human rights and environmental court judgment in history, a $9.5-billion US verdict against the Chevron Corporation for massive oil pollution in Ecuador’s Amazon basin.

Following the trial, Chevron removed its assets from Ecuador, left the country, and has refused to pay. The company now claims the Ecuador verdict was achieved fraudulently, and produced a witness, who told a US court that he possessed knowledge of a bribe. Judge Lewis Kaplan ruled in Chevron’s favour, halting collection of the pollution fine in the US and placing Donziger in electronic chains in his home.

Donziger’s wife Laura let me in. Their son Matthew shook my hand. In spite of the dire circumstances, the household bustled with preparations for a dinner party that evening. I found Donziger in his modest living room, on the phone, taking notes on a legal pad.

Is this man the renowned human rights attorney, celebrated by Nobel laureates and international lawyers, or is he a fraud artist?

Donziger, born in Jacksonville, Florida, in 1961, graduated from Harvard Law in 1991, and founded Project Due Process, offering legal services to Cuban refugees. In 1993, Ecuador’s Frente de Defensa de la Amazonía (FDA), representing 30,000 victims of Chevron’s pollution, heard about Donziger and asked him to help win compensation for their lost land, polluted water, and epidemics of cancer and birth defects in a region now known as the “Amazon Chernobyl.”

Donziger originally filed the claim in New York, but Chevron insisted the case be heard in Ecuador, where the trial began in 1993.

Evidence showed that between 1964 and 1992, Texaco (now Chevron) dumped 16 billion gallons of toxic wastewater into rivers and pits. Fifty-four judicial site inspections confirmed that the average Chevron waste pit in Ecuador contained 200 times the contamination allowed by US and world standards, including illegal levels of barium, cadmium, copper, mercury, lead, and other metals that can damage the immune and reproductive systems and cause cancer. According to Amazon Watch, by ignoring regulations, the company saved about $3 per barrel of oil, earning an extra $5 billion over 20 years.

In 2007, during the trial, Chevron stated that if the victims pursued the case, they faced a “lifetime of … litigation.” The plaintiffs persevered. Since the victims were dirt poor, Donziger and his team, with FDA support, devised an innovative solution to fund the case, offering investors a tiny portion of any eventual settlement.

“I believe the injustice to him is intended to intimidate the rest of us, to chill the work of other environmental and corporate accountability advocates.”

In 2011, after an eight-year trial, the court ruled in favor of the plaintiffs. Two appeals courts and the nation’s Supreme Court, the Court of Cassation, confirmed the decision. Seventeen appellate judges ruled unanimously that Chevron was responsible for the contamination and owed Donziger’s clients $9.5 billion.

According to court documents, Chevron “refus(ed) to comply” with the judgment and began to make good on its threat for a “lifetime of litigation.” According to internal company memos, Chevron launched a retaliatory campaign to attack the victims, discredit Ecuador’s courts, and “demonize” Donziger.

Chevron hired one of the world’s most notorious law firms, Gibson, Dunn & Crutcher—previously censured by England’s High Court of Justice for fabricating evidence. Judges in California, Montana, and New York have censured and fined Gibson Dunn for such misbehavior as witness tampering, obstruction, intimidation, and what one judge called “legal thuggery.”

Using US RICO statutes designed to prosecute organized crime syndicates, the firm filed a “racketeering” case against Donziger. Judge Kaplan at the US Court of Appeals for the Second Circuit in New York—a former tobacco company lawyer widely viewed as being friendly to large corporations—agreed to hear the peculiar case. Kaplan claimed the Ecuador trial “was not a bona fide litigation” and insulted the victims, calling them “so-called plaintiffs.” Gibson Dunn lawyer Randy Mastro called the Ecuador courts “a sham.”

On the eve of the trial, Chevron dropped its financial claims, allowing Kaplan to dismiss the jury and decide the outcome himself. Then Chevron unveiled their star witness—Alberto Guerra, a disgraced former Ecuadorian judge removed from the bench for accepting bribes. In a Chicago hotel room, Chevron and Gibson Dunn lawyers rehearsed Guerra for 53 days.

In Kaplan’s court, Guerra claimed that Donziger had approved a “bribe” to an Ecuadorian judge and had written the final court ruling for the judge, allegedly transferred on a computer thumb drive. No corroborating evidence was ever offered. Guerra later admitted lying about these facts, and a forensic investigation of the Ecuadorian judge’s computer proved that Guerra had lied.

The entire story now appears fabricated. Donziger’s lawyers have attempted to locate Guerra and depose him, but the star witness has not yet been found.

“Chevron’s case,” said Donziger’s lawyer Andrew Frisch, “rested on the testimony of a witness who was paid over $1 million.” Frisch stated that Kaplan’s rulings “have been contradicted in whole or in part by 17 appellate judges in Ecuador and 10 in Canada, including unanimous decisions of the highest courts in both countries.”

Nevertheless, without a jury, Kaplan accepted Guerra’s testimony and found that Donziger had committed fraud. Finally, Kaplan ordered Donziger to turn over his computer and cellphone to Chevron. Since this order violated attorney-client confidentiality, Donziger refused until the court of appeals could decide the issue.

Kaplan charged Donziger with “criminal contempt” for refusing his order. However, the order and the contempt charge were so outrageous that the N.Y. prosecutor’s office refused to accept the case. Kaplan defied the state authorities and appointed a private law firm, Seward & Kissel—with commercial ties to Chevron—to act as prosecutor, which, in turn, ordered Donziger be placed under “pretrial home detention.”

An unnamed New York Second Circuit judge—presumed by Donziger and his lawyers to be Kaplan—filed a complaint against Donziger with the bar grievance committee in New York, which then suspended Donziger’s law license without a hearing. However, bar referee and former federal prosecutor John Horan called for a hearing and recommended the return of Donziger’s law license. “The extent of his pursuit by Chevron is so extravagant, and at this point so unnecessary and punitive,” Horan wrote, “he should be allowed to resume the practice of law.” Donziger responded that, “Any neutral judicial officer who looks objectively at the record almost always finds against Chevron and Kaplan. The tide is turning and the hard evidence about the extreme injustice in Kaplan’s court will be exposed.”

This case appears to be about bullying. Chevron is one of the wealthiest corporations in the world. The plaintiffs are poor, Indigenous, and campesino people with scarce access to money or lawyers. “Donziger came to our rescue,” says FDA president Luis Yanza. How big can high-stakes corporate bullying get? Donziger’s lawyers estimate the oil giant has spent over $2 billion on 2,000 lawyers, public relations teams, and private investigators.

At the dinner party at Donziger’s, I met supporters from around the world, from Amazon Watch and Global Witness, journalists, lawyers, and human rights advocates. “This case is not just about Steven’s fate,” said Simon Taylor, director of Global Witness in London. “I believe the injustice to him is intended to intimidate the rest of us, to chill the work of other environmental and corporate accountability advocates.”

The tide may be turning for Donziger and the victims in Ecuador. In June 2019, Amnesty International asked the US Department of Justice to conduct a criminal investigation into Chevron’s and Gibson Dunn’s conduct, witness bribery, and fraud in the Ecuador pollution litigation

This past February, Prof. Ellen Yaroshefsky, director of the Monroe H. Freedman Institute for the Study of Legal Ethics at Hofstra University in New York, wrote that the Kaplan and Seward & Kissel prosecution of Donziger is flawed with conflicts of interest, financial ties to Chevron Corporation, and judicial bias.

In April, 29 Nobel laureates signed a letter stating, “(We) support Steven Donziger and the Indigenous peoples and local communities in Ecuador in their decades-long work to achieve environmental justice over pollution caused by Chevron…. Chevron and a pro-corporate judicial ally, US District Judge Lewis A. Kaplan, manufactured ‘contempt’ charges against Donziger. (Chevron’s) goal is to intimidate and disempower the victims of its pollution and a lawyer who has worked for decades on their behalf.”

A month later, more than 475 international lawyers, bar associations, and human rights advocates criticized Kaplan’s ruling for persecuting Donziger “based on false witness testimony provided by Chevron, personal animus, and… to protect Chevron from a valid foreign court judgment.” The letter, from the US National Lawyers Guild and the International Association of Democratic Lawyers, urges an end to the pretrial house arrest of Donziger, noting “such arbitrary detention sets a dangerous precedent for human rights attorneys in the United States and around the world.”

On July 16, the European Parliament wrote to the US Congress asking the Congressional Subcommittee on the Constitution, Civil Rights, and Civil Liberties to investigate Chevron’s treatment of Donziger, which the EU Parliament found “not consistent with what has traditionally been the strong support in the United States for the rule of law generally and for protection for human rights defenders in particular.”

Late at night, in the Donziger home, after the supporters had left, Donziger and his wife Laura sipped wine. “We’re not giving up,” Donziger said. “The only fraud in this case has been conducted by Chevron. Modern nations have comity relationships, formally respecting each other’s court decisions. We’re reviewing enforcement actions in Canada, Australia, and other jurisdictions. Chevron owes the money, and they can’t just run, hide, and fabricate stories to avoid paying. They’re persecuting me to try to change the public narrative, but they’re guilty. They committed the crime, they hurt people, they were proven responsible in a court of law that they chose, and they owe the money.”

Laura looked exhausted by the relentless harassment, but managed a smile. “The truth is the truth,” she said, and offered me more wine. As I write this, in mid-July, Donziger has been in home detention for 345 days, almost a year, longer than any lawyer in US history has ever served for a contempt charge.