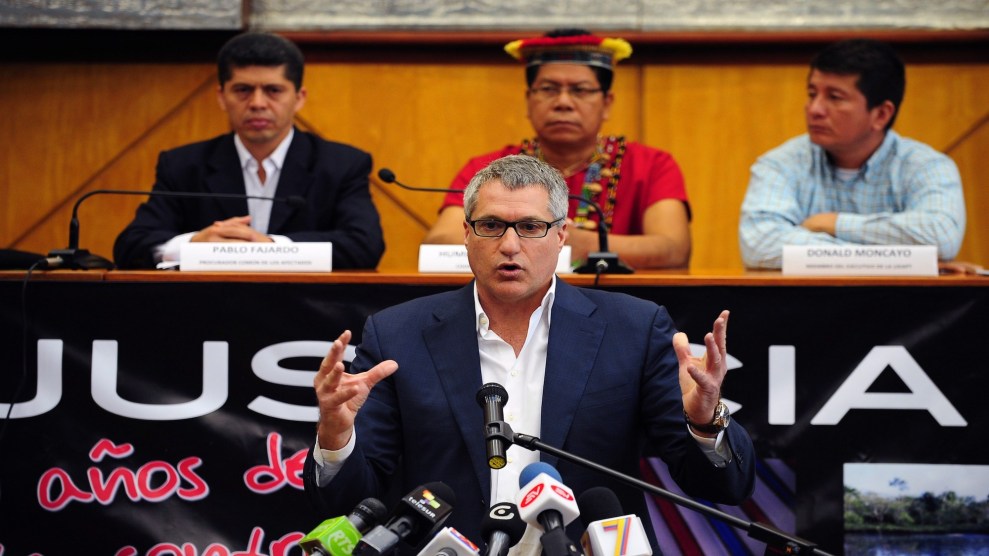 Many of us will have felt the grip of claustrophobic isolation over the past year, but the lawyer Steven Donziger has experienced an extreme, very personal confinement as a pandemic arrived and then raged around him in New York City.

On Sunday, Donziger reached his 600th day of an unprecedented house arrest that has resulted from a sprawling, Kafkaesque legal battle with the oil giant Chevron. Donziger spearheaded a lengthy crusade against the company on behalf of tens of thousands of Indigenous people in the Amazon rainforest whose homes and health were devastated by oil pollution, only to himself become, as he describes it, the victim of a “planned targeting by a corporation to destroy my life”.

“I never truly understood freedom until I was put in this situation.”

Since August 2019, Donziger has been restricted to his elegant Manhattan apartment, a clunky court-mandated monitoring bracelet he calls “the black claw” continuously strapped to his left ankle. He cannot even venture into the hallway, or to pick up his mail. Exempted excursions for medical appointments or major school events for his 14-year-old son require permission days in advance. An indoor bike sits by the front door in lieu of alternative exercise options.

“There’s no comparison to quarantine because I can’t even go outside for a walk. If my kid is sick I can’t go to the drug store to get a prescription,” Donziger said. “I never truly understood freedom until I was put in this situation.”

The nights are hardest for Donziger, when he has to struggle to get his jeans off over the boxy tag and lie in bed next to his wife “with the government still there on my ankle”. Each morning he wakes up in angst. A flag reading “SOS Free Steven” sometimes flutters defiantly from the window, but efforts to end the unusually long detention have yet to be granted.

“It’s been brutally difficult for him,” said Paul Paz y Miño, associate director of Amazon Watch, a conservation group allied to Donziger. “It’s taken a huge toll on him and his family. Chevron wants the narrative to be that he’s a criminal. The implications of that for the entire environmental movement against oil companies is terrifying.”

There are moments of relief, such as sticking his head outside to taste a sunny day or talking to his growing legion of outraged supporters, which now spans Alec Baldwin, Pink Floyd singer Roger Waters and dozens of Nobel laureates. “There’s never a day off, I can never properly relax,” Donziger said. “But you either grow or die in a situation like this. And I’ve been growing.”

The dispute with Chevron centers upon a landmark 2011 decision by the Ecuador courts to order the company pay $9.5 billion in damages to people blighted by decades of polluted air and water. Chevron has never paid up, claiming “shocking levels of misconduct” and fraud by Donziger and the Ecuadorian judiciary.

This case “had this magical quality to enrage everyone involved.”

But the subsequent web of events that has led to Donziger being detained and stripped of his law license is befuddling even to legal scholars. “Frankly, I scratch my head when I look at this case,” said Larry Catá Backer, a professor of international law at Penn State University. “It is this strange multi-front battle with one extraordinary explosive development after another. It has had this magical quality to enrage everyone involved in it.”

Donziger was first touched by the case that would consume his life as a young lawyer acting as a public defender in Washington. In 1993, he joined a legal team investigating reports of pollution in the Lago Agrio region of northern Ecuador, nestled next to the country’s border with Colombia.

The oil company Texaco had carved out drilling outposts in this tract of the Amazon since the 1960s, leaving what Donziger calls “grotesque” Olympic swimming pool-sized waste pits of oil. Pollution flowed freely into rivers and streams used by the Indigenous population for drinking water. Cancers of the stomach, liver and throat reportedly became more common in the region, as did childhood leukemia. “People there are living in a humanitarian crisis of epic proportions,” Donziger said.

A Spanish speaker, Donziger became ever more enmeshed in the case, traveling to Ecuador hundreds of times to assemble a case in behalf of local people. Despite lengthy attempts by Chevron, which bought Texaco, to block the case, the action ultimately went to trial and resulted in a historic judgement against the oil company.

Donziger’s elation was short-lived, however, with Chevron claiming that his team ghostwrote what should have been an independent assessment and offered a $500,000 bribe to sway the judgment. Donziger denied any wrongdoing and the Ecuador supreme court later affirmed the original ruling, but Chevron has refused to pay the $9.5 billion in damages.

A US federal judge then concurred with the fraud allegations, negating the possibility of wrenching the money from Chevron in its home country, finding that Donziger conducted a “pattern of racketeering activity” under statutes more commonly used to target mob bosses.

Donziger was made liable for millions of dollars in Chevron’s legal costs and the company was granted seizure of his laptop and cellphone. When he appealed this, claiming the devices contained sensitive client information, the judge, Lewis Kaplan, hit him with criminal contempt charges, upheld on appeal, that led to his house arrest.

In one of the stranger episodes in this saga, Chevron relocated Alberto Guerra, an Ecuadorian judge, and his family to the US, paid for his health insurance and a car while meeting with him more than 50 times before he provided testimony that Donziger discussed the bribe with him at a Quito restaurant. Guerra has since admitted that his testimony was exaggerated in parts, untrue in others.

This deception, the unprecedented length of detention for a misdemeanor charge, legal disbarment and personal financial wipeout has fueled a sense of persecution in Donziger. Kaplan’s conduct, Donziger said, has been an “abomination, unethical and abusive. I never thought this could happen in the US.” Other lawyers have voiced more measured concerns over Kaplan. Chevron has “captured” the judge, Donziger said, and now the oil company seems omnipresent in his fate.

His contempt charge will be heard by Judge Loretta Preska, who was on the advisory board of the New York chapter of the Federalist Society, who took the unusual step of appointing a law firm that has previously done work for Chevron, Seward & Kissel, to prosecute Donziger after the department of justice declined to take the case. “Why am I being tried by a Chevron-connected judge and prosecuted by a Chevron-connected lawyer? It’s just wrong,” Donziger said. “This is all part of a plan concocted by Chevron to dismantle my life. They want to do this to avoid paying up and to turn me into a weapon of intimidation against the whole legal profession.”

“Donziger has no one to blame but himself for his problems.”

Christiana Ochoa, an expert in environmental law at Indiana University, said Kaplan and Preska’s connections do not themselves prove any sort of bias, and that Kaplan’s strongly worded judgment suggests “not great behavior” by Donziger. But she added that the severity of Donziger’s treatment is “odd” and that questions remain over the conflict of interest in his prosecution.

“Certainly it’s very important to corporations like Chevron to protect themselves from liability from ecological harms,” she said. “They’ve refused to apologize to the victims. They don’t want to show any vulnerability.”

A Chevron spokesman said an international tribunal has confirmed the Ecuadorian decision was “fraudulent” and he denied the company has persecuted its longtime adversary. “Donziger has no one to blame but himself for his problems,” the spokesman said. “The court initiated the pending criminal case against him. Chevron is not involved in that case.”

In Donziger’s eyes, the only real corruption has occurred in the US system, not Ecuador’s, a symptom of what he views as a “colonial” mindset that has airily dismissed judgements made outside the US and obscured the ultimate protagonists of this saga, the people of Lago Agrio. Shortly before his house arrest, in the summer of 2019, Donziger toured some villages in Ecuador, discovering some people he’d previously met had died of cancer. The toxic pits remain, despite a piecemeal attempt by the government at a cleanup.

“The human suffering is immense,” he said. “It was hard to see. Ultimately, all this isn’t about me. It’s about what has happened to these people.”