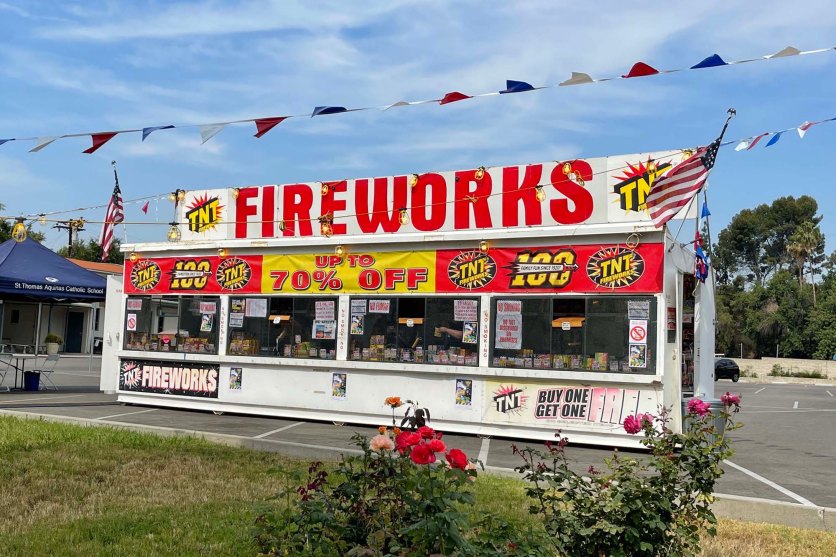 A fireworks stand in Monterey Park, California, earlier this year.Sports/Newscom/ZUMA

As Independence Day approaches, firefighters and government officials across the West have a message for residents regarding the traditional home fireworks fun: Please abstain.

This year’s combination of soaring temperatures, unusually severe drought, and fears of another epic burn season has prompted local and state officials to get ahead of the July 4 wildfire threat. It is difficult to separate Americans from their beloved fireworks, which generated $1.9 billion in consumer sales in 2020 and, according to the American Pyrotechnics Association, caused some 15,646 injuries. (The APA also cites older data estimating there were 17,800 fireworks-associated blazes in 2011.)

CalFire is taking the threat pretty seriously. On Thursday, California’s state fire agency tweeted out stats about illegal fireworks seizures along the state border, perhaps to demonstrate that its officers mean business.

Last week in Northern California, the San Mateo County Sheriff’s Office announced it had broken up a fireworks ring.

Investigation led to the seizure of approximately 15,000 pounds of illegal fireworks and approximately $1 Million in cash.https://t.co/nR64hqcqtX

On June 30, meanwhile, Los Angeles police confiscated 5,000 pounds of illegal fireworks in a residential area. When a bomb squad detonated some of the explosives, the blast damaged nearby buildings and caused at least 17 injuries.

But the bigger threat to health and livelihood may involve the confluence of illegal fireworks and 2021’s tinderbox conditions. Nearly 60 million people in Western states live in areas currently affected by drought. The Pacific Northwest and Western Canada have been coping with a record-setting heat wave that has killed hundreds of people and hospitalized hundreds more, even as it contributes to more dangerous fire conditions. More than 20 percent of the nation’s land area falls within one of the two most extreme drought categories. The majority of that land, according to Climate.gov, is in areas whose temperature records were just shattered.

Most wildfires—85 percent, according to the National Park Service—are caused by humans. In 2017, a teenager from Vancouver, Washington, threw fireworks into a canyon, igniting the Eagle Creek Fire, which caused evacuations, destroyed homes, and burned almost 48,000 acres in Oregon’s Columbia River Gorge. The 15-year-old was sentenced to five years probation and ordered to pay $36.6 million in restitution, not that he could afford it.

Illegal fireworks caused hundreds of blazes last year in California, where wildfires scorched more than four million acres all told. In one memorable incident, a pyrotechnic mishap at a gender reveal party in El Dorado sparked a wildfire that killed one person and burned thousands of acres. (Dozens more fires and injuries have been linked to gender reveals).

So far this season, 12 wildfires are burning in California, four in Oregon, and three in Nevada.

At a June 30 press conference in Salt Lake City, Gov. Spencer Cox said he was unable to ban fireworks outright, but pleaded with fellow Utah residents to take a pass: “I’m imploring you, each of you—to do the right thing. And the right thing this year is to put your fireworks away.” Cox is also featured in public outreach campaigns urging fire safety.

Limit Utah wildfires, from @govcox: Only start campfires in approved fire pits if restrictions allow. Douse until cool to touch. Use fireworks only during approved times, never on federal land and not on state/unincorporated private land. Shoot away from dry vegetation and rocks. pic.twitter.com/fjJxtsUhVx

In Portland, where the so-called heat dome pushed temperatures to a frightening 117 degrees, the Fire and Rescue department issued a total fireworks ban. “If we don’t take this proactive step now, I fear the consequences could be devastating,” Chief Sara Boone said in a statement. “It is not easy to make a decision like this so close to our national holiday but as Fire Chief I feel I have a higher responsibility to sometimes make unpopular decisions during unprecedented times to protect life, property, and the environment.”

Elsewhere in Oregon, the governor declared a state of emergency Tuesday due to “imminent threat of fire.” Local fireworks bans were issued in Bend and Clark County. Ditto Camus and Washougal in Washington State. California’s Calaveras County issued a ban through November 30. And the district attorney of Butte County, where the notorious Camp Fire leveled the community of Paradise in 2018, warned recently that the accidental setting of fires with fireworks will be prosecuted as a felony. According to CalFire, however, nearly 300 California communities will still let people use state-sanctioned fireworks—those with a “safe and sane” seal.

All fireworks are banned in San Antonio, Texas, and the city of El Paso enacted a ban on several kinds.

It’s not only the authorities raising the alarm. After horrific back-to-back fire seasons that destroyed countless homes and businesses, displaced thousands of families, and subjected millions more to weeks or months of breathing smoke-clogged air, residents of vulnerable fire regions are feeling nervous. Some have taken to Twitter to voice their concerns with a #banfireworks hashtag.

“#2020 fires were the scariest thing I’ve ever experienced in my life!” one Oregon resident tweeted. “This heat is a new level of crazy. Put the fireworks down!”

From FL, lived in TX, now OR. I’ve lived through many hurricanes and tornadoes… #2020fires were the scariest thing I’ve ever experienced in my life! No repeats, please! This heat is a new level of crazy. Put the fireworks down! Watch Disney set their’s off on TV. #banfireworks

Implored another: “Let’s not burn the state down this year.”

Got home from a late workday to this about 150 yds behind our house. Thanks to @OgdenFireDept for knocking it down quickly. Let’s all be kind and refrain from fireworks. Let’s not burn the state down this year #banfireworkshttps://t.co/IgN8jBimqe pic.twitter.com/RbvCbM3Jga