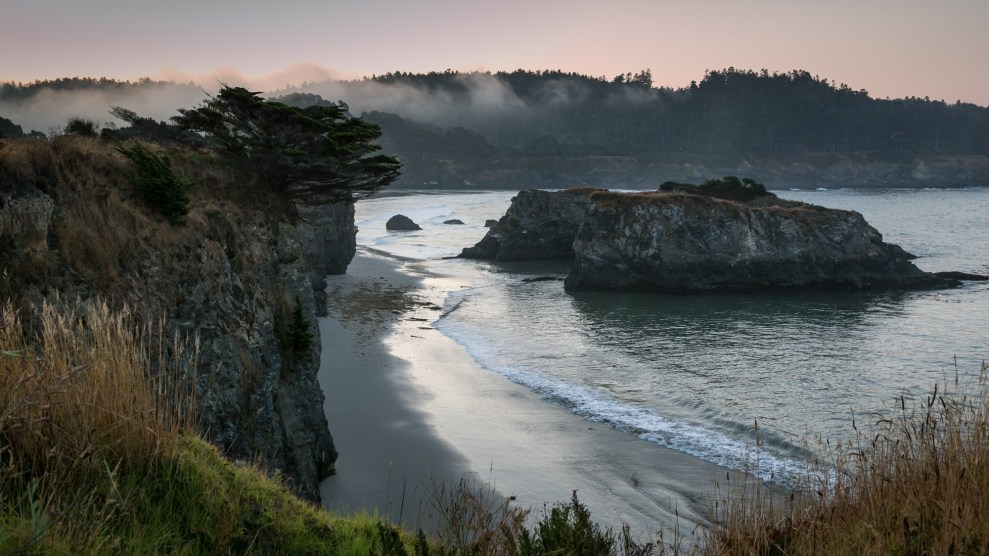 The Mendocino coast attracts visitors from all over the world.George Rose/Getty

This story was originally published by The Guardian and is reproduced here as a part of the Climate Desk collaboration.

On many mornings, the village of Mendocino vanishes into a thick white fog that covers its seaside cliffs, redwood trees and quaint Victorian houses.

Carved into California’s northern coast, the historic hamlet’s rugged beaches, scenic hikes, charming bed-and-breakfasts and boutique galleries draw in 1.8 million visitors each year. “Of course it does. This place is just so beautiful. It’s so lush and moist here,” said Julian Lopez, the executive chef at Mendocino’s Café Beaujolais. “So when you learn about all the water problems, it really comes as a shock.”

For the past century, misty, forested Mendocino—despite being nestled along a number of major rivers, creeks and springs—has relied on shallow wells for water. But amid a historic drought dessicating the US west, the aquifers beneath the town’s damp fog layer have rapidly declined, threatening to sink the region’s tourism industry and the residents who rely on it.

Café Beaujolais, which normally draws all its water for cooking and cleaning from two small wells on its property, has already been shelling out thousands of dollars to have water trucked in from nearby towns and cities. Because surrounding areas are also facing shortages, the costs of getting tanker trucks full of potable water has nearly doubled over the past few months—from about $350 per 3,500-gallon load to $600, Lopez said.

“This is likely to keep getting worse,” he said. “Especially with global warming, as the earth gets hotter and dry seasons get longer.”

Pretty much every business owner in Mendocino is grappling with similar anxieties. A few minutes from Lopez’s restaurant, the Good Life Café and Bakery recently closed its restrooms. The throngs of tourists who line up down the block to sample the café’s quiches, cappuccinos and organic salads are directed instead to the portable toilets set up in the back parking lot. The owners of the local Harvest grocery market have brought in portable toilets as well.

The managers of the inns and lodging houses up and down the mountain highway that runs through the town have placed placards on the dressers and vanities of each room, asking guests to conserve water by taking shorter showers. But Mendocino depends on the half a billion dollars of annual revenue that visitors bring in, and establishments here aren’t inclined to scare them away with overly dire warnings.

For businesses recovering from COVID, “the idea that a lack of water could again lead to increased unemployment and fewer jobs—it’s scary.”

Privately, however, several business owners said they worried that if their water woes continued, they would have to shut down, or scale back. “Businesses are still recovering from the effects of Covid,” said Ryan Rhoades, superintendent of the Mendocino community services district, which manages the town’s water. “The idea that a lack of water could again lead to increased unemployment and fewer jobs—it’s scary.”

So in a town that houses just about 1,000 full time residents and 2,000 daily visitors, many local people are learning to live with much less water.

“Right now I’m setting personal hygiene back several centuries,” said Sue Gibson, 82. The well that supplies her picket-fenced yellow house near downtown Mendocino has been spurting up less and less—and she’s had to spend hundreds of dollars to get water delivered.

To conserve, she takes short “navy showers”, turning off the tap while she shampoos and lathers. She wears clothes over and over again, “for longer than I ever would have before”. And except when she’s hosting company, she serves her food on paper plates. “I loathe that—I really do,” she said. “My mother would be horrified!”

Still, compared with some of her neighbors, Gibson said, she felt fortunate. Though she lives on a fixed income, she has so far been able to afford to have water trucked in. “It’s the people with babies and the elderly I feel for the most,” she said. Had her husband been alive, “keeping him clean and cared for would have been very difficult”, she said. “I’m glad he didn’t have to go through this.”

Gibson, who retired to Mendocino 30 years ago, and many of her neighbors have weathered several droughts.

“But this is the worst year I’ve seen,” said Donna Feiner, whose business Feiner Fixings operates 24 small community water systems across the region. All summer, she has kept a hawk eye on electronic monitors in the well systems she manages, looking for small leaks, and zipping across the region to regularly test how much water remains in the aquifers. At home, she and her partner have taken water conservation to the next level, seldom flushing the toilet and only showering once a week. “A lot of us locals are already really good at saving water,” she said so it’s unclear how much more they can cut back.

One local resident acquired a permit to drill down 165 ft, “and he came up completely dry.”

“It’s a challenge,” said John Dixon, who owns lodging houses in the area. He requires guests to reuse towels, and he’s installed water-efficient dishwashers and laundry machines. But last month, one of his properties briefly ran out of water when the city of Fort Bragg, which used to send neighboring coastal towns including Mendocino and Little River regular truckloads of supplementary water, stopped exports. High tides had pushed brackish water up the dwindling Noyo River, which Fort Bragg relies on for its water, and local officials decided to stop outside sales to protect residents’ supply.

“That day that For Bragg cut us off, the wells on one of my properties came up dry,” Dixon said. “And the drivers weren’t going to be able to bring us a delivery.” At about 11 am, the taps ran completely dry. After a couple of hours, Dixon was able to convince a different water supplier to send down a tank from the inland town of Ukiah. Since then, he has been paying a premium to continue to do so. Still, like most other residents and business owners in the region, he’s eager for a longer-term solution.

Many of the wells around here are hand-dug and very shallow—but digging deeper isn’t necessarily a solution due to the geology of the region, said Rhoades. Most of the rainwater that seeps into the ground collects in the first eight to 30 feet of soil, he explained. Drilling deeper into the bedrock could reveal more deposits of water—or nothing at all. One local resident acquired a permit to drill down 165 ft, “and he came up completely dry,” Rhoades said.

There have been discussions about transporting water by barge, or via the Skunk Train, a historic railway built in 1885 to haul lumber that in recent decades has served as a tourist attraction. Robert Jason Pinoli, the train’s president and general manager, or its “Chief Skunk”, recently proposed using his railway’s diesel locomotives to pull 200,000 gallons of water at a time from the nearby town of Willits to Fort Bragg, where the water could be driven over to homes and businesses in Mendocino and nearby towns. One tanker truck can only carry about 35,000 gallons of water at a time—so using the rail would be faster and more efficient, Pinoli said. “These are my friends and neighbors dealing with shortages,” he said. “I just want to help.”

But Mendocino doesn’t necessarily have the money to cover the operational costs. And the Willits mayor, Madge Strong, said local leaders “would have to look very closely at whether it would have been possible or advisable to send so much over, given our supply of reservoir water and groundwater”.

The Mendocino county supervisor John Haschak said the most realistic option at the moment was to pay a bit of a premium to truck water over from Ukiah, an hour and a half away. In coming years, the county will have to help residents install more water storage tanks, improve efficiency and invest in systems to recycle and reuse water.

“Now you go to a dinner party and you say to the host, ‘Do you flush or not?’”

“Across the state, many of our water systems are outdated,” said Newsha Ajami, an expert on water policy at Stanford University. They were built mostly in the 20th century for a different climate, unaltered by the effects of global heating, and for a smaller population. “Now we have to live the reality that we cannot be as water rich as we used to be,” she said. “And this is an opportunity to rethink how to use water more efficiently while conserving our cultures and industries.”

For many in Mendocino, out of necessity, water has become a daily topic of conversation among neighbors, said Gibson. “And it’s like, now you go to a dinner party and you say to the host, ‘Do you flush or not?’” Gibson laughed, “That’s not exactly what you would call dinner table conversation, you know?”