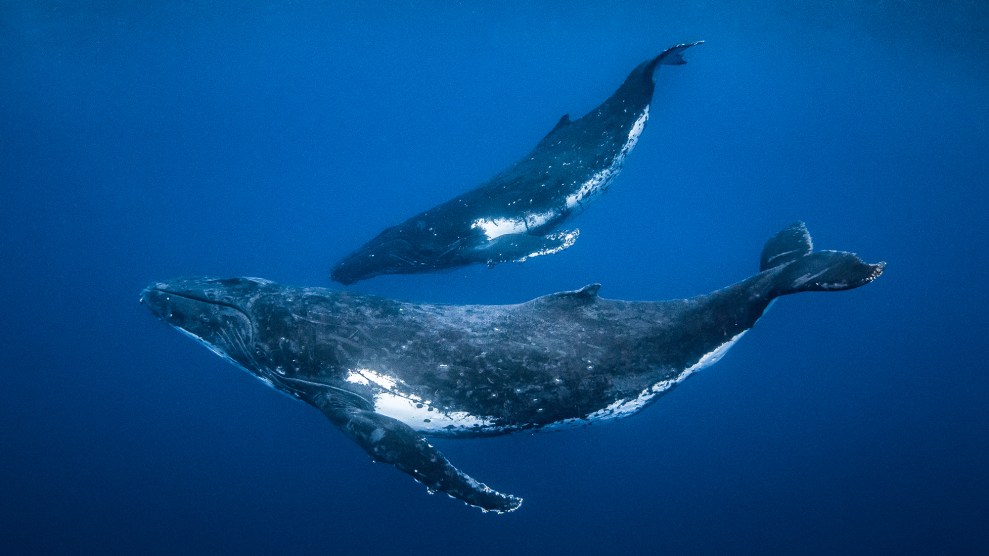 Baleen whales, such as this humpback and her calf, use low-frequency sound to communicate.Getty Images

Noise pollution from proposed deep-sea mining could radiate through the ocean for hundreds of kilometers, scientists predict, creating a “cylinder of sound” from the surface to the sea bed.

An analysis by scientists from Oceans Initiative in the US, the National Institute of Advanced Industrial Science and Technology (AIST) in Japan, Curtin University in Australia, and the University of Hawaii, published in the journal Science, has found that noise from one mine alone could travel 500km (about 310 miles) in gentle weather conditions.

Seventeen contractors with exploration licenses are looking at the possibility of mining the Clarion-Clipperton Zone (CCZ), an area spanning 4.5 million square kilometers between Mexico and Hawaii, which has abundant mineral-rich lumps known as polymetallic nodules.

Scientists estimated the noise impact if each of these mining companies launched one mine in the CCZ. They found that noise levels in a radius of 4-6km from each mine could exceed thresholds set by the US National Marine Fisheries Service, above which there are risks of behavioral impacts on marine mammals.

“The deep sea houses potentially millions of species that have yet to be identified, and processes there allow life on Earth to exist.”

Marine mammal species, known to be sensitive to noise, are found throughout the CCZ, including endangered migratory baleen whales and deep-diving toothed whales. Many deep-sea species—about which very little is known—are believed to use sound and vibrations to navigate, communicate and detect predators in the absence of sunlight. Underwater noise is likely to “disrupt ecosystems,” said the authors of the paper, which was funded by the Pew Charitable Trusts.

“The deep sea houses potentially millions of species that have yet to be identified, and processes there allow life on Earth to exist,” said Travis Washburn, a deep-sea ecologist at AIST. While much work remained to be done on the impact of noise, he said, there was still an opportunity to understand and mitigate them before they occurred.

The impact of noise pollution from deep-sea mining is “understudied and overlooked,” according to the report, whose findings have implications for mining regulations, drawn up by the International Seabed Authority (ISA).

The Pacific island of Nauru has said it plans to start deep-sea mining and invoked a UN rule two years ago that could force the ISA to complete the regulations enabling deep-sea mining by next July. The Science study follows widespread concerns from governments, corporations and environmental organizations that the science and governance of deep-sea mining remains inadequate for prospecting to go ahead.

Moving ahead without rigorous and transparent standards in place “would represent the start of a large-scale, uncontrolled experiment,” said the report. The authors urged the ISA to use the “precautionary principle” and, in the event of exploitation of the deep ocean, ensure only one or two mines are operating at a time until the impact of noise pollution is fully understood.

Their analysis used noise levels produced by existing industrial processes, such as dredging and oil and gas exploration as proxies for deep-sea mining. The findings suggest that if all 17 contractors were to operate one mine each, it would cause elevated noise levels over an area spanning 5.5 million sq km—far larger than the European Union.

Craig Smith, co-author and professor emeritus of oceanography at the University of Hawaii, said: “If our modelling is correct, it could require rethinking of environmental regulations, including the number of mining operations allowed within the Clarion-Clipperton Zone.”

Companies are currently required to study the areas where mining is proposed and compare them with control areas within their sites where no mining will take place. These are known as “preservation reference areas.” Each contractor has up to 75,000 sq km. “Our models suggest that nowhere in … the whole 75,000km square is free from noise impact,” said Smith. “It might require changing the regulations so that the control areas are further away.

“We have not been able to do the studies, but if mining operations went on simultaneously, it might have a big impact on a whole bunch of organisms.”

The authors, who were unable to find peer-reviewed data on the noise levels of the few deep-sea machines that have been tested, also called for transparency. “We urge contractors to release in a timely manner information on sound-source characteristics of all seabed-mining components,” they wrote in the report. Their findings are likely to underestimate noise levels, the scientists suggest, because the machines they modeled operate in shallower water. They were also likely to have missed acoustic energy generated by heavier deep-sea machines, as well as support vessels’ pumps and other sound sources.

The ISA is tasked with protecting the marine environment from “serious harm” from sea-bed mining. While it has recommendations for assessing noise impacts, it has yet to define what constitutes serious harm, including unacceptable noise levels, according to the report.

In a statement, the ISA said: “The effective protection of the marine environment is guaranteed through requirements for environmental baseline studies and environmental impact assessments and monitoring, as set out in exploration and future exploitation regulations.”

Test mining and testing of mining components require an environmental impact assessment, of which noise measurement is included, it said, adding that testing will provide a “better understanding of the potential impact of noise” on the deep sea bed and deep sea biodiversity.