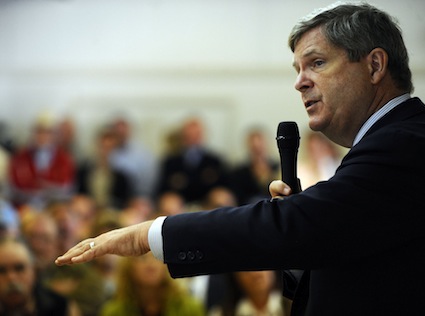 Back in March, USDA secretary Tom Vilsack spoke at an event called the Commodity Classic in Tampa, Fl. Sponsored by agribusiness giants Monsanto, BASF, Syngenta, John Deere, Dow AgroSciences, Dupont, Syngenta, and Archer Daniels Midland, among others, the event hails itself as the “premier national trade show and convention for corn, soy, wheat and sorghum farmers.”

According to an account in the trade journal Agri-Pulse, Vilsack spoke “with sometimes evangelistic fervor.” He thundered against critics of corn-based ethanol, reiterated the Obama administration’s goal of doubling US farm exports by 2014 by ramming open foreign markets, and praised the assembled farmers and agribusiness flacks for their record of “ensuring affordable food for US families,” Agri-Pulse reported. The former governor of Iowa ended his speech on an evem more flattering note: “The farmers in this room have provided the prescription that this nation must follow to get itself back totally on its feet … You should never ever bet against the American farmer because if you do, it’s a losing bet.” The audience roared its approval.

The ag secretary was essentially promoting an agribusiness-as-usual vision of farm policy: maximum production of a few commodity crops, mainly to be used to fatten confined animals, create cheap sweeteners and fats, and fill gas tanks. He did so amid much rhetoric about “jobs,” the Agri-Pulse account shows. But that’s ludicrous. The modern food system lionized by Vilsack has been a massive net destroyer of jobs. And the fixation on doubling US ag exports can’t be good news for farmers in the global south, who struggle to compete with their highly capitalized US peers.

Meanwhile, US ag policy as expressed by Vilsack is putting us increasingly at odds with an emerging global consenus on how to structure food production in an era of climate change, resource scarcity, and population growth. As I wrote last week, for years now, development specialists and ag scientists associated with the UN and even the World Bank have been questioning the assumption that only chemical-intensive consumption of a few commodities can “feed the world” going forward. The latest data point: the UN’s Food and Agriculture Organization has come out with a policy blueprint called “Save and grow: A policymaker’s guide to the sustainable intensification of smallholder crop production.” Its central premise reads like a direct rebuke to Vilsack: “The present paradigm of intensive crop production cannot meet the challenges of the new millennium.”

The report acknowledges that the advent of pesticides, mined and synthetic fertilizers, and monocrops represented a “paradigm shift in traditional agriculture” that led to higher crop yields in the short term. But then it pushes for “another paradigm shift,” to what it calls “sustainable crop production intensification, which seeks to increase food production without eroding the long-term productivity of farms and their surrrounding ecosystems. It promotes farming practices that won’t be popular with the agribusiness giants that funded the Commodity Classic: things like minimizing fertillzer use and increasing soil organic matter by planting nitrogen-fixing cover crops; and using a broad variety of plants and animals in conjunction, rather than each farm specializing in massive quantities of one or two crops.

According to the report, such approaches have been proven to work:

A review of agricultural development projects in 57 low-income countries found that more efficient use of water, reduced use of pesticides and improvements in soil health had led to average crop yield increases of 79 percent. Another study concluded that agricultural systems that conserve ecosystem services by using practices such as conservation tillage, crop diversification, legume intensification and biological pest control, perform as well as intensive, high-input systems.

But such systems don’t appear by magic, the FAO stresses. Intensifying agriculture sustainably will require policy reform at the global and national levels.

Meanwhile, an agribusiness-funded backlash against FAO’s policy agenda has been launched, Tom Laskawy reports in Grist. A project called Global Harvest Initiative (GHI)—backed by DuPont, John Deere, Archer Daniels Midland, and Monsanto, in conjunction with Big Green groups the Nature Conservancy, the World Wildlife Fund, and Conservation International—has released its own policy brief, subtly titled “Embracing Science-Based Solutions.” The main problem facing global food production, the report suggests, is “resistance to adopting new technologies” in the global south. The solution is simple: the creation of “rule-based and predictable regulatory systems” that can “bring technology forward and foster innovation.” In other words, resistance to the industry’s products must be brought to heel.

In Vilsack’s Commodity Classic speech, he hewed close to the industry party line, defying the emerging consensus exemplified by the latest FAO report. Taken as a whole, the Obama administration’s ag policy has from the start been wildly inconsistant, sometimes veering in the direction of progressive change, other times lurching back toward the agrichemical status quo. Meanwhile, the US style of input-intensive commodity agriculture has succeeded in creating mountains of cheap food, but has has given rise to a massive crisis in diet-related disease, contributes mightily to climate change, and routinely trashes the ecosytems it touches. In short, it’s a system badly in need of reform, not one that needs be exported to other nations.