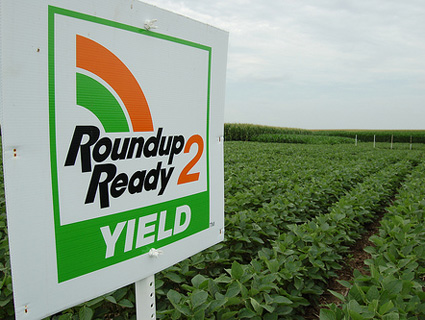 While I have been fixating on the USDA’s decision to ramp down oversight of the genetically modified seed industry, another federal agency has been quietly asking hard questions about the business practices of the industry’s dominant player, Monsanto.

The SEC is investigating Monsanto’s tactics for defending the market for its herbicide, Roundup. The news emerged just before the July 4 holiday weekend, during Monsanto’s press conference about its quarterly financial earnings. Company execs boasted of a 77 percent increase in profit before dropping a mini-bombshell, The Wall Street Journal reported:

Monsanto said it was cooperating with a previously undisclosed US Securities and Exchange Commission probe into its customer incentive programs for herbicides in fiscal years 2009 and 2010, and had received a subpoena to provide related documents.

Neither the SEC nor Monsanto will comment on the ongoing investigation. But Monsanto did issue a terse press release after the earnings call explaining that the probe “relates to financial incentives Monsanto offered to distributors who carry its glyphosate products and the financial reporting of those incentives.”

Glyphosate is the active ingredient in Monsanto’s flagship Roundup herbicide, and “distributors” refers to the seed industry’s middlemen, the companies that buy seeds and agrichemcals from suppliers like Monsanto and sell them to farmers. So what the company is saying its that it gave “financial incentives”—presumably, discounts—to somehow promote Roundup sales in 2009 and ’10.

Here’s the context. For years, the company minted profits by selling farmers seeds engineered to withstand that potent weed killer, and also selling them copious amounts of the weed killer itself. But its patent on glyphosate expired in 2000. By the late 2000s, Chinese competitors selling cheap generic glyphosate had stormed into the market, eating away at Monsanto’s Roundup sales. In response, according to Bloomberg, Monsanto announced in early 2010 that it would spend up to $150 million on “incremental price concessions or trade incentives” to boost its Roundup brand.

Now, there’s nothing illegal about a company giving discounts to its distributors. The question is what the company gets in return. Did Monsanto essentially bribe agrichemical dealers to promote Roundup and squeeze out competitors? That, I suspect, is the question SEC investigators are asking. Monsanto certainly has a history of using its heft to manipulate the markets it dominates. Here’s what AP’s Christopher Leonard concluded after digging into Monsanto’s business practices for an an excellent 2009 investigative report: “The world’s biggest seed developer is squeezing competitors, controlling smaller seed companies, and protecting its dominance over the multibillion-dollar market for genetically altered crops.”

We also know that the $150 million the company said it would deploy to boost its Roundup brand last year seems to have been well spent. In its recent quarterly profit statement, the company reported that its “agricultural productivity” segment—mainly, Roundup—saw sales leap 57 percent compared to the same quarter a year earlier. Altogether, the company expects to make a cool $700 million in gross profit from that segment in 2011. That’s not quite equal to Roundup’s mid-2000s glory days, when the herbicide routinely churned out $1 billion in annual profits for the company, but it’s a lot more than most analysts thought it would be raking in after Chinese competitors swooped into the market.

Thus, for all of its marketing blather about “sustainable agriculture,” Monsanto’s business model still relies heavily on selling lots and lots of herbicide. And as the SEC investigation suggests, it may be resorting to illegal tactics to maintain its Roundup cash cow.