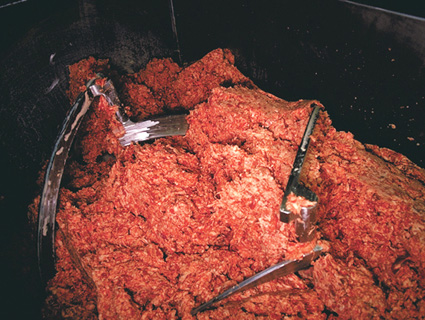 Like a horror-film villain, “pink slime”—the cheeky nickname for scraps of slaughtered cow that have been pulverized, defatted, subjected to ammonia steam to kill pathogens, and congealed into a filler for ground beef—takes a pounding but keeps coming back.

Last month, McDonald’s announced it would stop using the stuff. But just this week, pink slime got a de facto endorsement from none other than the USDA, which—the online journal The Daily reported—plans to keep buying millions of pounds of it for use in the National School Lunch Program.

These developments are just the latest installments of a long-playing drama. The product first entered my consciousness in the 2008 documentary Food, Inc., when the product’s maker, Beef Products International, was proud enough of its now-infamous burger extender to do what no other meat company would: invite filmmaker Robert Kenner into its factory to film its shop floor in action.

The scene, video below, features a Beef Products executive talking over a milieu straight out of Chaplin’s Modern Times: a vast network of steaming tubes, with people in protective gear and face masks wandering about fussing with dials. Pale chunks of fat and sinew are whisked up on a conveyor belt into a machine, from which they emerge as a coarse paste before entering more machines. “From the food safety standpoint, we’re ahead of everybody,” the exec says, touting his firm’s ammonia process. “We think we can lessen the incidence of E. coli O157:H7″ (a deadly strain). The clip ends with those heavily protected workers carefully shutting the finished product—uniform, flesh-colored blocks—into boxes. Over that image, the exec claims that the product ends up in 70 percent of hamburgers served in the US. “In five years we’ll be in 100 percent,” he predicts.

Before the exec’s prophesy could be tested, the product received a devastating blow in the form of an investigative report from the New York Times’ Michael Moss. This article brought the phrase “pink slime” into public view. The nickname emerged, Moss reports, from an internal 2002 email by a USDA microbiologist, who declared he found the practice of labeling the stuff as ground beef to be “fraudulent.” But the real scandal uncovered by Moss was that “Lean Finely Textured Beef”—the USDA’s preferred phrase for you-know-what—wasn’t performing as advertised.

You see, Beef Products International was marketing the stuff to beef processors, fast-food chains, and school cafeteria directors as a solution to the problem of ground beef riddled with pathogens, many of which have evolved resistance to antibiotics. The idea was that pink slime contained enough ammonia that, when you mixed it with ground beef, it would effectively sterilize the resulting blend. And the USDA and FDA had taken that promise at face value, Moss reports. One “top official” of the USDA’s division that oversees the meat supply assured Moss, “It eliminates E. coli to the same degree as if you cooked the product.”

Yet that premise was false. Rather than eliminating pathogens from burger mixes, pink slime was often actually adding pathogens, Moss revealed. Beef Product International’s raw material, fatty trimmings that come mainly from the outside of the carcass, tend to be loaded with E. coli and salmonella. The company had been lowering its ammonia dose based on complaints about flavor. Possibly as a result, in tests conducted by the National School Lunch Program between 2005 and 2009, pink slime tested positive for salmonella at a rate four times higher than the conventional burger mix it was supposed to sterilize, Moss revealed.

The USDA had kept purchasing huge amounts of pink slime for schoolchildren despite the positive tests, Moss noted, precisely because it was cheaper than pure ground meat. “School lunch officials said they ultimately agreed to use the treated meat because it shaved about 3 cents off the cost of making a pound of ground beef,” Moss reported.

His report generated outrage in some circles. “Three cents off the cost of making a pound of ground beef,” a certain blogger for Grist magazine groaned. “Under the severe fiscal austerity that school cafeteria administrators operate under, pinching those three pennies is a rational decision, even if it means subjecting children to ammonia-ridden slime that may contain pathogens.” But the company shook off such high-profile derision, and the School Lunch Program and the company’s fast-food customers remained loyal buyers.

That is, until Jamie Oliver took up the cause on his Food Revolution show last spring. He endeavored to make pink slime from butcher scraps in front of a live audience, theatrically brandishing a jug of ammonia and pouring a huge dash into a bowl of ground scraps. “Imagine how happy an accountant is, you just turned dog food into what can potentially be your kids’ food,” Oliver declared.

McDonald’s denies any connection to the uproar caused by Oliver’s nationally televised show, but the fast-food giant recently joined Taco Bell and Burger King in announcing an end to its use.

And that leads us back to the National School Lunch Program, which, the The Daily reports, plans to buy 7 million pounds of pink slime over the next several months. Last year, The Daily adds, the stuff made up 6.5 percent of the beef purchased by USDA for the school lunch program. A USDA spokesperson speaking to me on background could not confirm the 7 million pounds number but did confirm that 6.5 percent of last year’s purchases were LFTB (Lean Finely Textured Beef). He insisted that it’s a high-quality, safe product and claimed that it had showed no food-safety problems since the 2009 Times article. Nor, he added, does price play a role in the department’s decision to buy it.

The Daily interviewed two former USDA microbiologists who take a different view. One, Gerald Zirnstein, the man who originally dubbed the product “pink slime,” said, “I have a two-year-old son…And you better believe I don’t want him eating pink slime when he starts going to school.” The other, Carl Custer, added, “We originally called it soylent pink…We looked at the product and we objected to it because it used connective tissues instead of muscle. It was simply not nutritionally equivalent [to ground beef]. My main objection was that it was not meat.”

Both men say the product was approved as safe by the USDA over their objections.

Meanwhile, the problem pink slime was originally intended to solve, pathogens in meat, continues apace. Wired‘s Maryn McKenna recently broke down the FDA’s annual report on the bacteria it finds on the retail meat it tests each year. “Almost 29 percent of ground-beef samples carried Salmonella strains that were resistant to six [antibiotics],” McKenna reports.