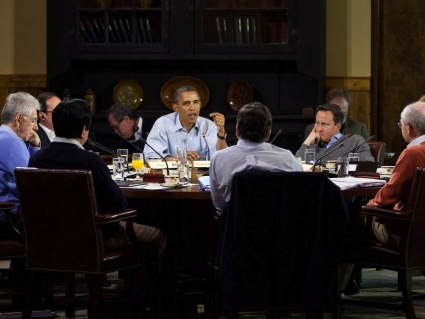 “More than one in four Africans—close to 218 million people—is undernourished,” the UN Development Program declared in a recent report. With food prices gyrating upward in recent years, the situation has reached a crisis. What’s the answer?

According to President Obama and his fellow heads of state in the G-8 (United States, France, Germany, Italy, Japan, United Kingdom, Canada, and Russia), the solution lies in the private sector. At last weekend’s G-8 summit at Camp David, the group launched “The New Alliance for Food Security and Nutrition,” described as a “commitment by G-8 nations, African countries and private sector partners to lift 50 million people out of poverty over the next 10 years through inclusive and sustained agricultural growth.”

The “private-sector partners” in the alliance have pledged $3 billion in new investments in African ag over the next decade. And what are the companies that President Obama and his G-8 peers have tapped to lift Africa out of hunger? Their number (list here) turns out to include global agribiz giants Cargill, Monsanto, DuPont, Syngenta, and Yara, and junk-food behemoths Unilever, Kraft, Hershey’s, and Mars.

And a whopping $2 billion of the total $3 billion in pledged investments will come in the form of a single “world-class fertilizer production facility” planned by the Norwegian company Yara, the globe’s largest nitrogen-fertilizer company, according to USAID, the State Department’s ag-development arm.

Over on the Triple Crisis blog, Tufts researchers Sophia Murphy and Tim Wise spell out what’s wrong with this picture:

The private sector is not just like government, only a little different. It is ENTIRELY different. Corporations are accountable to their shareholders, obliged to make a profit.  They are not charities. They are bound by law, but not by the public interest. They are not bound by the outcomes of the Paris and Accra Aid Effectiveness conferences, which committed donors to allow and encourage national ownership of development spending and to better coordinate their efforts. They are not bound by the five Rome Principles, agreed by over 60 Heads of State at the 2009 World Food Summit, which reinforced the aid effectiveness outcomes focused specifically on donor investments in agriculture. Corporations are not parties to the human rights covenants that oblige most governments to realize the universal human right to food.

As Murphy and Wise point out, in order to join the alliance, African governments had to agree to “refine policies in order to improve investment opportunities,” which is an uncomfortable echo of the old IMF “structural adjustment” agreements that forced countries to open their food markets to foreign competition in order to qualify for loans. On Alternet, Jill Richardson has a good post on how large agribiz projects often have little relevance to Africa’s small-scale farmers—the very people best positioned to solve the continent’s hunger problems.

Already, some of the major partners have proven to be dubious, at best, players in food-deficit countries in the Global South. In India, for example, GM seed giant Monsanto has aggressively marketed its premium-priced, patented Bt cotton seeds to small scale farmers, to the point where in swaths of the country, no other cotton seeds are available, according to a report from New York University Law School’s Center for Human Rights and Global Justice. Results have been disastrous:

In Andhra Pradesh alone, at least 17,775 farmers committed suicide between 2002 and 2009. There, Bt cotton crops generated  much lower yields than non-Bt cotton crops for smallholder farmers during years with drought. The use of Bt cottonseed, contrary to advertising, also failed to reduce pesticide usage for many farmers.  Moreover, high seed prices raised the farmers’ input costs, while sale prices remained low. In the state of Maharashtra, more than 2,500 farmers committed suicide each year between 2002 and 2009.

And Yara, the Norwegian behemoth that plans to build that above-mentioned fertilizer factory, is embroiled in scandal even as the G-8 issues glowing press releases about its intentions in Africa. Two “senior executives” resigned last week amid a corruption probe by the Norwegian government, and the company “has faced several police probes over the past two years in relation to its ventures or operations in Switzerland, Libya and India,” Reuters reports.

This shift in emphasis from public to private commitments comes at a time when rich-country investors are snapping up prime African farmland to grow food and fuel crops for rich-country consumers.

What’s to stop companies like Monsanto and Yara from using the G-8 initiative to gain a foothold in Africa, and then exploiting it merely to sell pricey agrichemicals and other inputs to large operations using Africa’s best land for export crops? Such a scenario would do much more to burnish their own bottom lines than to create a resilient, abundant food system in Africa for Africans.

Back in 2008, a global group of scientists convened by the World Bank and the United Nations filed a report on how policymakers should respond to the global food crisis and the specter of hunger in the global south. Known as the The International Assessment of Agricultural Knowledge, Science and Technology for Development (IAASTD), the report concluded that “business as usual is no longer an option”—meaning that the world’s hunger problems will not be solved by resort to increasingly expensive and environmentally damaging agrichemicals. Obama and his G-8 peers have defied that advice by putting the likes of Yara and Monsanto at the center of their food-aid efforts in Africa.